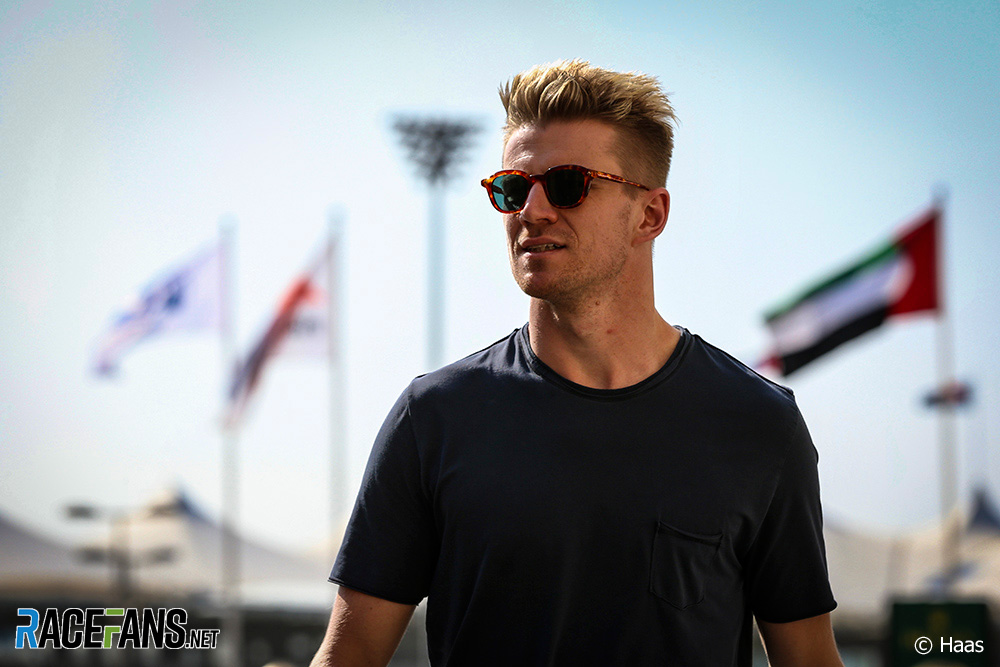 New Haas driver Nico Hulkenberg says he didn’t pursue a Formula 1 comeback until earlier this year when he felt the desire to return.

Hulkenberg, who is replacing Mick Schumacher at the team next year, last raced in F1 full-time in 2019 with Renault. Since then he has appeared on five occasions as a substitute at Racing Point and, earlier this year, Aston Martin.

Speaking to media including RaceFans at Yas Marina, Hulkenberg said he didn’t immediately pursue a return to F1 after losing his Renault drive three years ago.

“For two years I wasn’t too stressed about it,” he explained. “I was enjoying the life out of the driving seat. It’s much more relaxed, there’s other benefits.

“But then it creeped back, the desire to go back on the grid, to go racing, to kick ass, to be in the driving seat.”

Hulkenberg made his F1 debut with Williams in 2010, was without a race seat the following year, then returned in 2012. From then he raced continuously until he was dropped by Renault, racking up a total of 181 starts, after which he felt taking a break “was what I wanted [and] what I needed also.”

“And properly, obviously, I wasn’t a third driver or anything. So I really had the time to step back, disconnect from it properly. Anyway then it was Covid time so not much going on.

“Once the season in 2020 started, obviously soon after that I came to Silverstone to replace Checo. But it was good for me to have time away to digest, to reflect on some things, change of perspective a little bit too.

“Then ’21, of course, sometimes it’s difficult when you have to watch, when you’re on the sidelines. But I think at that time it was still okay for me. This year then I think watching got a little harder, especially when you analyse and you see and you think you can do better in places, so it started the return project.”

Aside from his occasional F1 duties with Aston Martin, Hulkenberg tested an IndyCar last year but decided against seeking a move into the series. But after rumours began to emerge over Schumacher’s future at Haas, Hulkenberg called team principal Guenther Steiner.

He also made contact with other teams, but Hulkenberg said “all roads more or less led to here.” It wasn’t until the last few weeks that the deal for him to return to F1 finally came together.

“You never know until you really know, until it’s signed,” he said. “I think the last months it got more and more concrete and serious and I was getting more optimistic and confident that we can agree a deal. So I’d say the last couple of weeks.”

His team mate will be Kevin Magnussen, whom he had a terse exchange with in front of the television cameras following the 2017 Hungarian Grand Prix. Hulkenberg told him he was “the most unsporting driver” on the grid, prompting Magnussen’s infamous comeback: “Suck my balls.”

Hulkenberg says the pair are already on good terms following a chat long before his deal to join Haas was announced.

“I expect to have a good relationship,” he said. “We’ve, I think, cleared that incident and we’ve broken the ice at the beginning of this year actually. I said hello to him with his exact same words from ’17 and he felt that was quite funny and amusing.

“I have absolutely no worries working and racing alongside him. I think we’re both grown up adults, we respect each other and we’ll race for the team so no problems whatsoever.”

Last week Steiner explained he chose Hulkenberg over Schumacher because of his greater experience. Hulkenberg said he doesn’t feel Schumacher has been hard done by in losing his seat to him.

“That’s natural in F1. We all fight for our careers, for the same piece of Tarmac. I think many drivers in their careers had to move for another guy, whether it’s more experience two years more or 10 years more, I think that’s irrelevant. That’s just how F1 is.

“Ultimately the driver, when he’s racing, he has to convince the team with performance. And if that’s not the case, the team is going to change. Same with engineers, with all personnel. That’s why that keeps happening all the time.”

Hulkenberg will have his first run in the team’s VF-22 chassis tomorrow in the Yas Marina tyre test. It will be a valuable opportunity for real-world running in the car before next year’s short, three-day pre-season test.

“The most important thing for tomorrow is just for me to obviously get my head around F1 and especially this Haas car, to understand it,” said Hulkenberg. “It’s a bit of a head start for next year. Three days pre-season testing is not a lot before the first event.

“So it’s just for me a little teaser to get a feel for this car and how the system works, driver fit stuff, a lot of basics that you can already clear and get out of the way. And also obviously have a look already at the car, where the performance is, what is good, where do we need to maybe focus on, these kind of things.”

RaceFans is run thanks in part to the generous support of its readers. By contributing £1 per month or £12 per year (or the same in whichever curreny you use) you can help cover the costs of creating, hosting and developing RaceFans today and in the future.