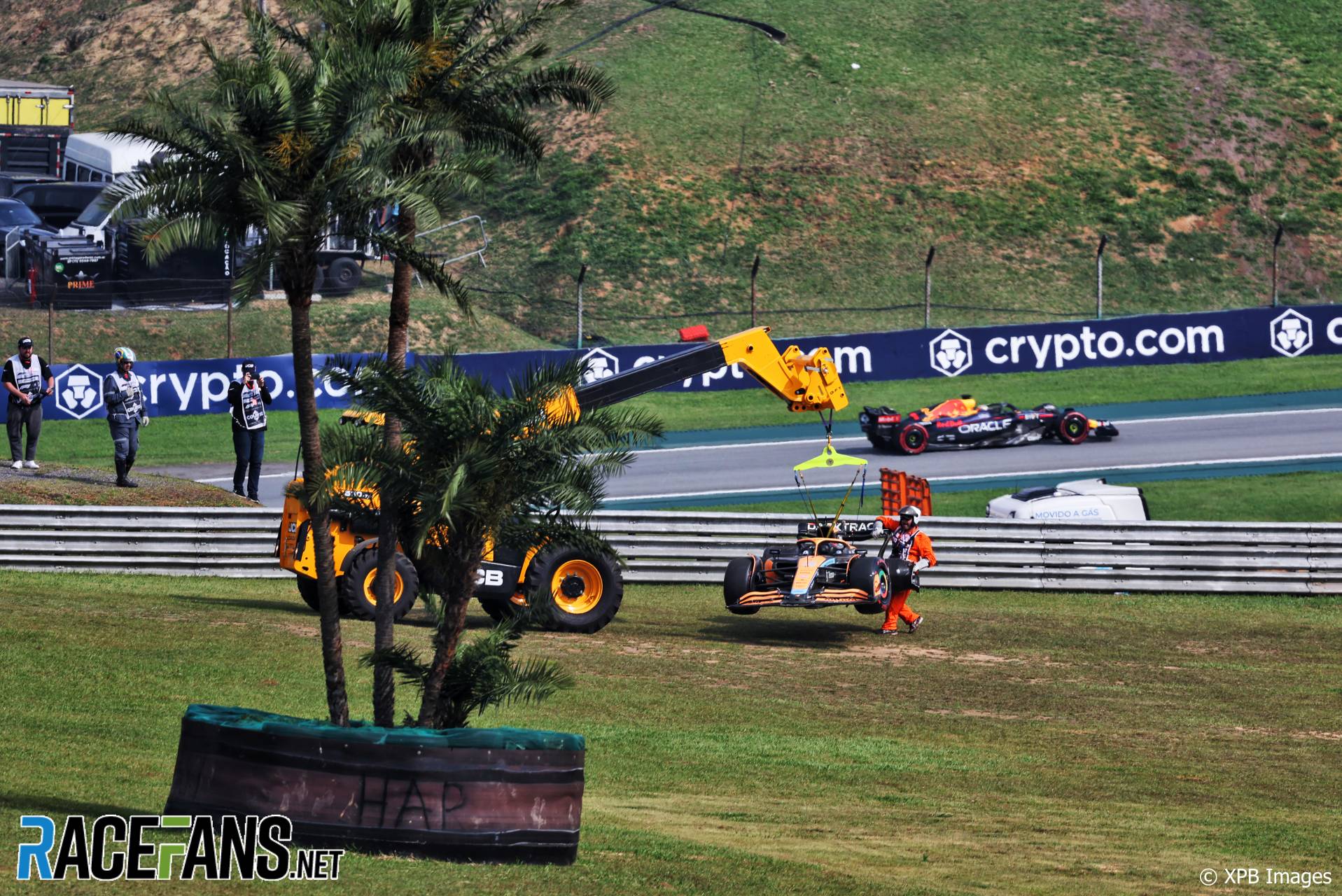 Daniel Ricciardo has been given a three-place grid drop for the next race and penalty points on his licence for colliding with Kevin Magnussen during the Brazilian Grand Prix.

Magnussen was tipped into a spin by Ricciardo at turn eight on the first lap of the race. As Magnussen’s car spun around, it swung into the McLaren, and the contact put both drivers out.

The stewards spoke to both drivers and examined footage and data from the incident. They decided Ricciardo was entirely responsible for the collision, but accepted he had not driven recklessly.

“Ricciardo made contact with Magnussen at turn eight on lap one, which caused Magnussen to spin, and subsequently both cars crashed,” they explained. “McLaren explained that in their view Magnussen was slower at the exit of turn eight than the other cars ahead, which made it difficult to judge the closing rate, as the two cars interacted.

“Ricciardo explained that in his view, he had slowed sufficiently that he was not going to collide with Magnussen and that he slightly misjudged it.

“Thus the stewards determine that Ricciardo was wholly to blame for the incident and issue a drop of three grid places for the next event.”

Ricciardo’s grid drop will be applied at the final race of the season, the Abu Dhabi Grand Prix, which will also be his last appearance for McLaren.

He was given two penalty points on his licence which puts him on a total of eight.

Ricciardo said there was little more he could have done to avoid the contact. “I had a decent run through [turns] six and seven and I remember cutting back to the inside for eight. I was kind of having a look, but also just trying to brake with a little bit of clean air.

“Then I remember then Kevin protecting the line, so I was then just trying to pull back in line and follow suit. I remember pulling up a bit and then obviously I think part of the apex, that’s when I gave him a little touch.

“To be honest, it didn’t feel like much. But then as soon as I saw him start to slide, I was like, ‘oh’. And then the second part, obviously, that’s when we made bigger contact.

“I don’t know if, let’s say, I could’ve braked harder or more, or if it was just the way he squared up the corner and the angle, I don’t know. But also I’m not here to say it’s his fault, my fault, I mean if it’s my fault of course I apologise, but it’s more just sorry for both of us for not being in the race and sorry for our team, that’s the part that hurts the most. Lap one incidents they’re certainly the worst.”