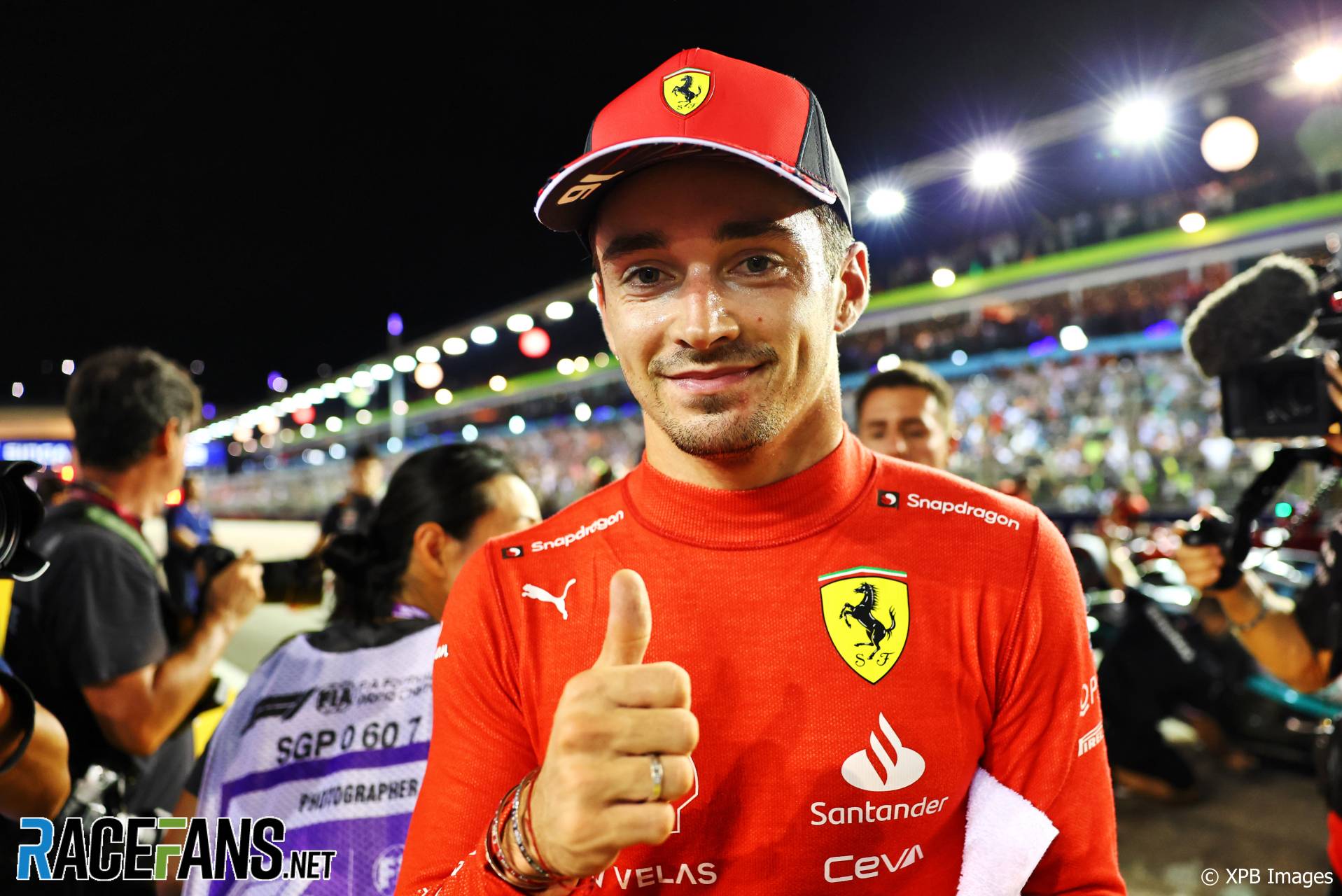 Charles Leclerc took pole position for the Singapore Grand Prix after Red Bull told Max Verstappen to abandon what appeared certain to be a pole lap at the chequered flag.

In a session that began in the wet and slowly dried out over the three stages, Leclerc took his ninth pole of the season despite making a mistake on his final lap. Verstappen, who would have been last to finish his lap on the drying track, was told to pit despite being almost a second up on Leclerc through two sectors.

Sergio Perez will start on the front row of the grid in second, with Lewis Hamilton taking his best starting position of the season in third. Verstappen will start down in eighth on the grid after abandoning his final run.

Following the rain-affected third practice, the circuit was still wet when the first phase of qualifying began. All drivers headed out on intermediate tyres, with the two Mercedes of Lewis Hamilton and George Russell the first to set any lap times.

Charles Leclerc’s first flying lap was easily quickest of all, seven-tenths of a second faster than the Mercedes. The Ferrari driver then had a trip down the escape road at turn eight, from where he emerged, and Kevin Magnussen emulated his mistake at the same corner shortly afterwards.

Max Verstappen went top of the times with a 1’54.395, but with the track drying, Leclerc soon improved to go even faster by almost two tenths of a second.

With five minutes remaining, the field had committed to staying on intermediate tyres, no one feeling brave enough to risk slicks. By now the drop zone included the two Williams of Alexander Albon and Nicholas Latifi, with Yuki Tsunoda, Valtteri Bottas and Sebastian Vettel. Bottas improved to move up to 11th, dropping Pierre Gasly into danger in 16th.

As the chequered flag flew, Tsunoda jumped into the top ten to go safe, while Daniel Ricciardo slipped into the bottom five. Gasly secured his prgression in the other AlphaTauri, which put Esteban Ocon into 16th place. Vettel jumped to 11th to go safe, pushing Mick Schumacher down into 16th.

There were double yellow flags when Fernando Alonso ran off track at turn eight and took a moment to rejoin, the Alpine driver briefly slipping into anti-stall. Ricciardo was unable to improve and was eliminated in 16th.

Schumacher was the last driver to cross the line, making a big improvement and moving safe, dropping Bottas down to 16th and out. “The timing wasn’t great,” rued the Alfa Romeo driver on his radio.

Joining Bottas in elimination were Ricciardo, Ocon and the two Williams of Albon and Latifi. “Just tricky out there,” Albon told his team. “Front [and] rear locking really a lot with these new pads, it’s doing the same as Canada where it’s just bite, it’s no feeling.”

The remaining 15 drivers stuck with the intermediate tyres when the second part of qualifying began. Leclerc was quickest of the first batch of drivers to complete a first flying lap, with Verstappen moving to second with a lap almost four-tenths slower than the Ferrari.

With their first laps complete, drivers debated whether or not it was time to switch to slick tyres. Ferrari sent Leclerc on a second push lap on his intermediate tyres, before opting to abandon the run and bring in the fastest driver on the track for a second set of intermediates.

With five minutes remaining, Aston Martin were the first team to roll the dice for slick tyres, switching both Lance Stroll and Sebastian Vettel onto softs. Both were safely out of the drop zone, while the two Haas cars of Schumacher and Magnussen, Zhou Guanyu, George Russell’s Mercedes and Tsunoda all needing to make improvements to save themselves from elimination.

Zhou pitted for slick tyres, while the Haas cars and Tsunoda chose to stay on intermediates. Russell used fresh intermediates to improve to seventh, dropping slick-shod Vettel into the danger zone in 11th but with the Aston Martin driver on slick tyres.

But those on slicks couldn’t find the grip they needed. Stroll skidded off at turn 13 but continued. Vettel began his flying lap but skidded off at turn eight and lost his chance to improve. “We’re out,” he told his team on the radio. “It was too early for dries.” Zhou, the only other driver on slicks, also failed to make the cut for the final 10.

Meanwhile Tsunoda, Magnussen, Alonso and Gasly all used their intermediates to improve at the chequered flag. That dropped Russell into 11th and as the Mercedes driver had no other opportunity to improve, he was eliminated before Q3. “Sorry guys I couldn’t do anything, I really struggled,” he said. “Exactly the same issue as P1. What a shame.”

The three slick-tyred runners were also eliminated, along with Mick Schumacher, who was left behind while team mate Magnussen headed into Q3.

Although none of the drivers who used slick tyres in Q2 made the cut for the final 10, both Verstappen and Sainz queued up at the end of the pit lane on fresh softs when the crucial third and final segment of qualifying began.

Leclerc made a late call in the garage to switch from intermediates to softs, leaving only Magnussen and Tsunoda as the only two among the top ten drivers to choose to remain on the intermediates for this first efforts.

Verstappen was the first driver over the line to start his first flying lap. With the track still damp, Yuki Tsunoda was easily the fastest on his intermediate tyres, after the first laps. That was until Hamilton moved up to the top of the times by over two seconds on his slicks.

The track was rapidly improving and the circuit began coming to the dry tyre runners. Alonso, Leclerc and Verstappen all went seconds quicker on their second attempts, before Hamilton retook provisional pole with a 1’51.019.

Perez moved into third position as Pierre Gasly made a mistake at turn 18 and had to recover back onto the track by reversing his AlphaTauri. Fortunately, none of the nine other cars on track were impeded by his manoeuvre.

With one minute of time remaining, Alonso took provisional pole but was immediately beaten by Leclerc. Sainz crossed the line to complete his final lap as the chequered flag flew. Leclerc set two personal best sectors but made an error at turn 16.

Despite the mistake, Leclerc still sat on provisional pole ahead of Perez and Hamilton, who had improved to go third. Verstappen was the last driver with a chance of taking pole position and was comfortably quicker than Leclerc through two sectors. But as he approached the final corner, Red Bull suddenly called their driver into the pit lane, abandoning his run and costing him an almost guaranteed pole position.

As Verstappen returned to the pits, Leclerc had secured his ninth pole of the season. He will start the Singapore Grand Prix with Perez alongside him on the front row, and Hamilton behind them in third, his best starting position of the season so far.

Sainz will start fourth, ahead of Alonso, Norris and Gasly. After abandoning an almost certain pole lap, Verstappen will start from eighth on the grid, with Magnussen and Tsunoda rounding out the top ten.