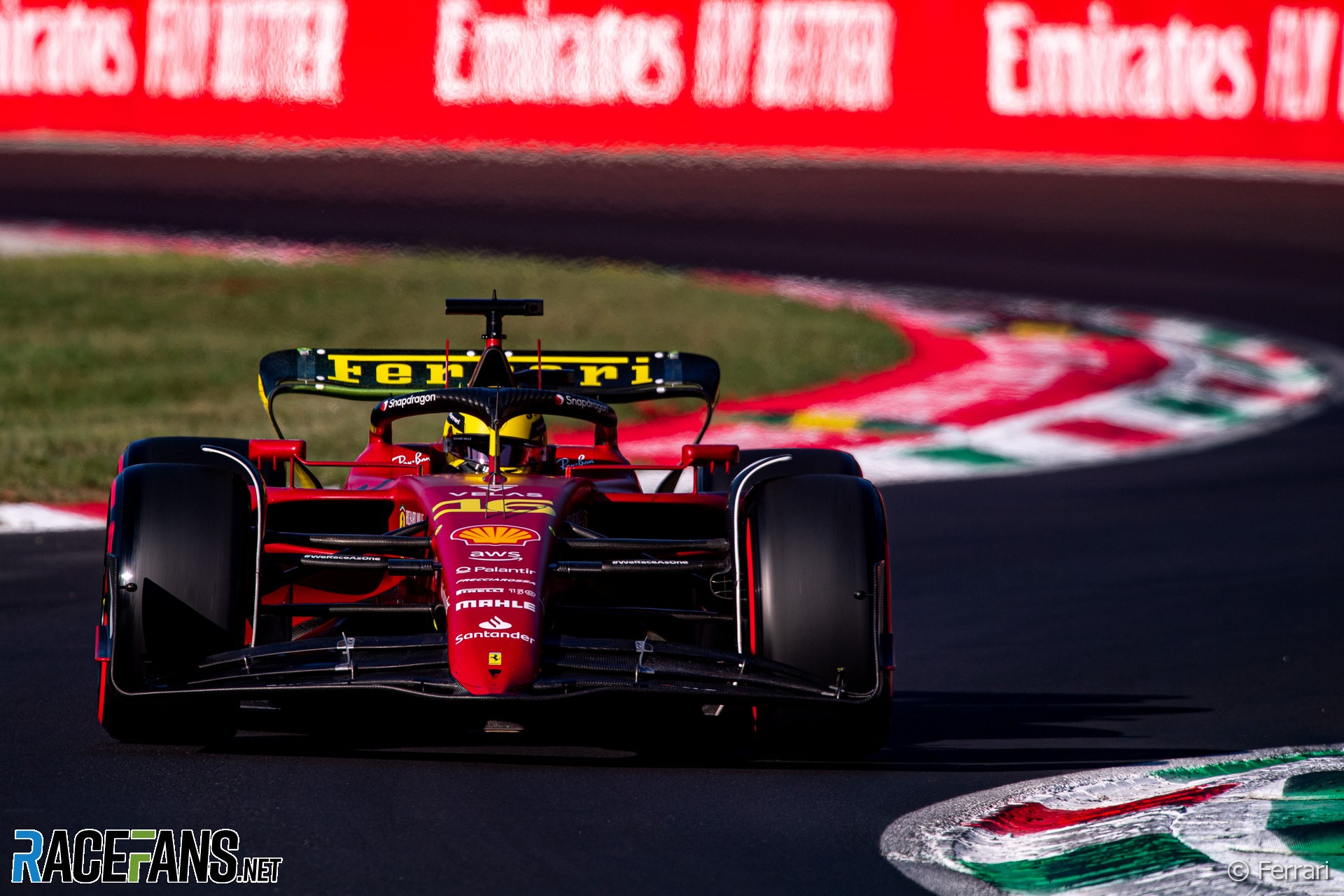 With the two world championship titles all but mathematically decided, the main intrigue heading into the final seven rounds of the 2022 season is whether anyone can stop Red Bull and Max Verstappen’s run of consecutive victories: Zandvoort was his fourth in a row.

Just as in Belgium, the first race weekend of the triple-header which begins the second leg of the championship, Red Bull have chosen to handicap the soon-to-be twice world champion with a grid penalty for using a fifth engine at the power-dependant circuit on the calendar. It may only be five slots on the starting grid as opposed to a back-of-the-grid demotion as at Spa, but the guarantee that Verstappen will not be on the front row is an opportunity Ferrari and Red Bull are unlikely to get again this year.

Fortunately for the thousands of Ferrari fans who will descend on Monza with as uninhibited fever as ever, they had every reason to go home happy on Friday with Charles Leclerc and Carlos Sainz Jnr each ending one of the two practice session quickest ahead of the championship-leading Red Bull.

Ferrari being fastest on Friday is no unusual occurrence in 2022 and so often Verstappen has ascended through the course of the weekend to deny them on Sundays. But as the sun set on the Monza paddock, even Leclerc had to admit the signs were encouraging.

“Honestly, the feeling is good,” said the 2019 Italian Grand Prix winner, who ended Friday just under two tenths of a second slower than his team mate. “I’m quite, quite happy with the first feelings we got on this track.

“After what happened in Spa, the car is in a similar place, a bit more extreme here, but a similar place to Spa. So we expected a bit of a tougher day, but it’s a good first day. Now, we need to do a step forward for tomorrow.”

Leclerc is one of only two drivers in the top three teams who, as things stand, will head into qualifying on Saturday unencumbered by a grid penalty. He will be authentically fighting for pole position, as opposed to team mate Sainz, the two Red Bulls or Lewis Hamilton’s Mercedes. But Leclerc is more focused on Sunday than Saturday, and here too he sees reasons to be cheerful.

“[Our] race pace looked actually stronger than the quali pace on my side,” he said. “I was happier with my car on high fuel. So looking good again.”

Despite being limited by another back-of-the-grid start for this weekend, Sainz was at least encouraged by being the quickest driver on Friday.

“I must say that since FP1, the car has felt in a much better window, in a much better position than where it was in Spa,” he said. “Lap times were coming easy. The stopwatch doesn’t lie and we were more and more on the pace. So it’s been a pleasant surprise.”

But in a season where Ferrari have tasted disappointment more often than success at the end of a weekend, Sainz knows all too well not to get ahead of himself when looking at the times at this stage.

“I don’t think we are the fastest out there by any means, especially in the long runs,” he cautioned. “But at least we are closer than what we thought.”

Having won from the middle of the pack and even further beyond in recent races, the prospect of Verstappen starting no higher than sixth on the grid must not seem too daunting by comparison. Naturally, Red Bull focused on their long-run pace as pole position for Verstappen has been rendered realistically impossible with the world champion running a higher downforce set-up than his rivals.

“I think the car was quite good,” said Verstappen. “Just trying a few things for the car from FP1 to FP2 to understand if you could do things better. Some worked, some didn’t. Just general long run practise of course with the little penalty we have. Everything seems to work quite well.”

While the Ferrari drivers seemed encouraged by the pace they showed in the two sessions, Verstappen focused more on his long-run performance in second practice – and he liked what he saw from the data, as he was consistently lapping quicker than anyone else on the medium tyres at the end of the session. Is another repeat of his Spa dominance on the way?

“I mean, there’s still a few things we can do better,” he said, “but of course Monza is not like Spa in terms of track layout.

“Of course it’s low downforce, but we never expected it to be like Spa. But if we can find a way – even if it’s, let’s say, half way to Spa – then I think we have a good chance. If you look at the long runs, I think we look quite good and that’s of course the most important for the race.”

Verstappen’s team mate Sergio Perez is a fan of Monza. He especially enjoys making his way through the field at the high-speed Italian track, having won from 14th on the grid in two consecutive British F3 races here and taking a fine second place finish for Sauber in 2012, executing a brilliant one-stop strategy into take a podium having started from 12th. This weekend, the now-Red Bull driver thinks tyre degradation will play an important role once again as he looks to recover from a 10-place grid penalty.

But after Mercedes were Verstappen’s closest adversaries in the Dutch Grand Prix just one week ago, both Lewis Hamilton and George Russell were once again left scratching their heads as they tried to figure out what was responsible for their latest deficit to their rivals.

“To be honest, it was a bit of a strange day,” Russell admitted after ending Friday in fifth, half a tenth behind Lando Norris’s McLaren.

“FP1 was looking pretty strong, but then Ferrari and Red Bull have seemingly taken a step forward compared to us. So maybe we’ve taken a step back, as we were obviously behind in McLaren in FP2. So a bit of work to be done tonight to understand that.”

With Hamilton starting from the back of the grid with his fourth power unit for the season, Russell is seemingly the only driver with a legitimate chance of fighting Leclerc for pole position. Hamilton has already accepted that, with Russell having the choice of whether to run first or second in qualifying this weekend, he will be giving his team mate a tow on Saturday. However, Russell says sticking behind Hamilton for a slipstream will not be the priority.

“If you nail it, it definitely does work,” he said. “But there’s high risk, high reward. So it’s not something we’re putting a lot of emphasis into.

“Qualifying sessions are the time when we learn quite a lot about the car, the tyres and that’s clearly been somewhere we’ve struggled this year. So for now I think we’ll both just go in and do an ordinary session.”

With no Red Bulls set to start from the top five grid positions whatever happens on Saturday, the Tifosi will expect nothing less than Leclerc earning pole position to give Ferrari the best chance possible of breaking Verstappen’s latest streak of victories.

“I don’t know how much Red Bull was sandbagging, so let’s wait and see tomorrow when they put everything together,” Leclerc said. “But today the feeling was really good. So I hope we can keep that feeling.”