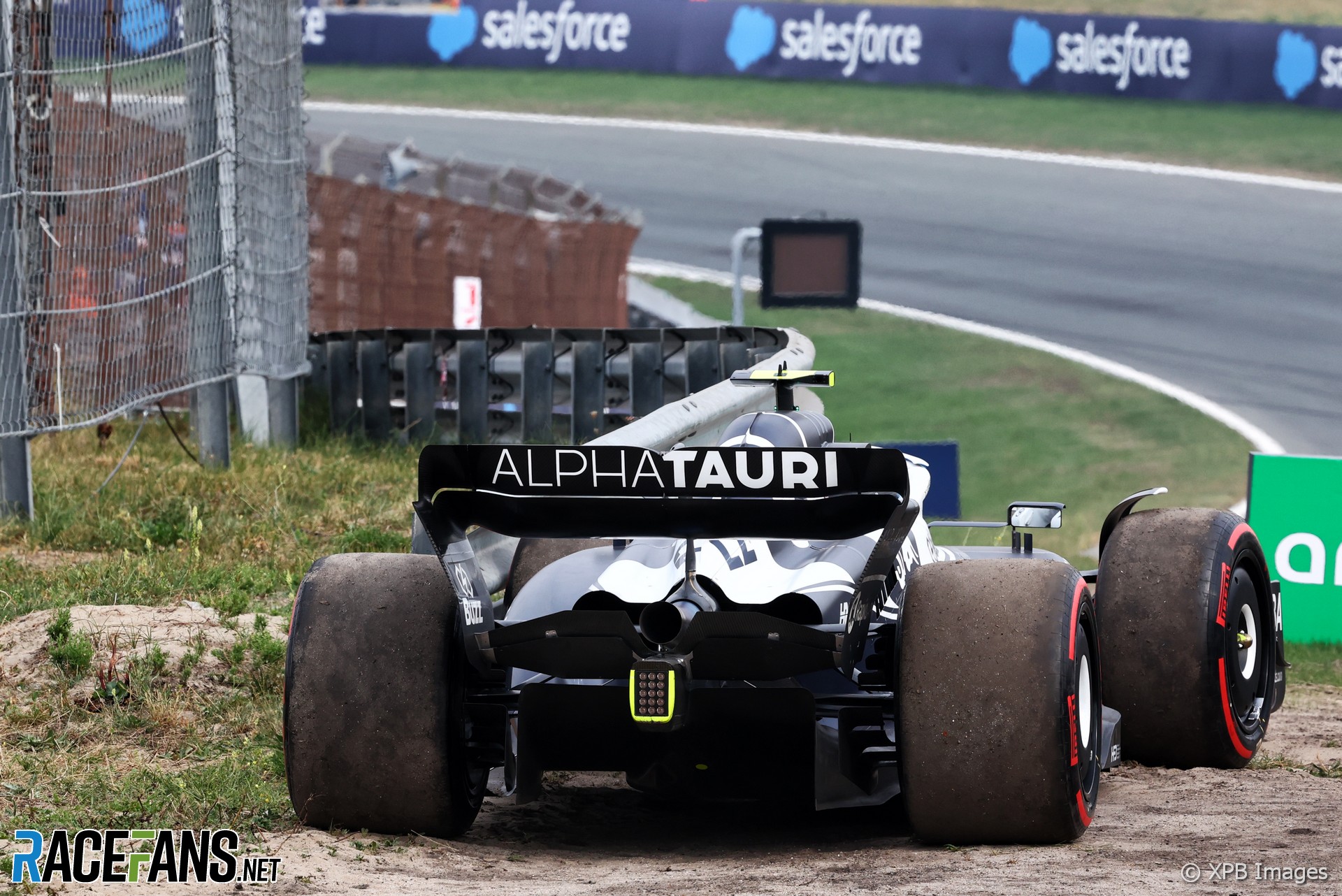 Yuki Tsunoda said he could feel something was clearly broken with the rear of his car when he stopped on track twice during the Dutch Grand Prix.

The AlpahaTauri driver was running in tenth position when he pitted for hard tyres at the end of lap 42. When he exited the pit lane, he immediately reported that his new tyres were not securely fitted and was told to stop on the circuit before being directed to continue by his team.

After pitting a second time and being released back onto the circuit, Tsunoda confirmed he could still feel a problem with his car and was again told to stop on circuit, where he eventually retired which prompted a Virtual Safety Car.

AlphaTauri’s chief engineer of vehicle performance, Claudio Balestri, said that the team were investigating the cause of Tsunoda’s retirement.

“After the pit stop he reported something strange at the rear of the car, we called him in again to change the tyres and immediately after we had a car failure. This is currently under investigation within the team,” Balestri explained.

Tsunoda later explained to media including RaceFans after the race that he had detected the problem leaving the pit lane. “For me it was quite clear, especially at the rear,” he said. “That’s why I got told from my engineer to stop.

“We fitted a new tyre again and I confirmed that the same thing’s happening. I thought first it was just wheelspin happening because it was the hard tyre – that’s why it was low grip. But I felt a clear issue that something was going on with that rear part and the engineers confirmed there was an issue – that’s why we stopped.”

Tsunoda described how he had to cautiously recover back to the pit lane after being told to fire up his car. “I was like drifting on the straight,” he said. “I was doing counter-steering on the straight. So that’s why I didn’t feel like it’s normal.”

The AlphaTauri pit crew were seen appearing to re-tighten Tsunoda’s safety belts in the cockpit before releasing him from the pit lane. Tsunoda confirmed that his mechanics were helping to re-secure him into his seat before he was released back onto the circuit.

The problem ended a promising weekend for Tsunoda, who out-qualified team mate Pierre Gasly, started ninth and was over ten seconds ahead of his team mate before pitting.

“I’m quite happy with what I did and my progress so far,” Tsunoda said. “It was pretty strong this week, so from my side, just keep doing like this and just progress and also learn from Pierre as much as possible.

Tsunoda is under investigation for a possible violation of the rules over his departure from the pit lane.

After being released from the pit lane on hard tyres after a routine pit stop, Tsunoda reported a problem upon rejoining the track.

After stopping on the track approaching turn six, Tsunoda was directed to restart his car and continue on the circuit.

Tsunoda restarted his car and rejoined the track, but reported a clear problem with his car as he recovered to the pit lane.

As Tsunoda approached the pit lane, he alerted his team that they would need to secure his seat belts.

After exiting the pit lane for a second time, Tsunoda confirmed the issue remained and was directed to pull off the circuit and retire from the race.

Update: Tsunoda was given a reprimand for his loose seatbelts but the team was cleared of releasing him unsafely from the pits