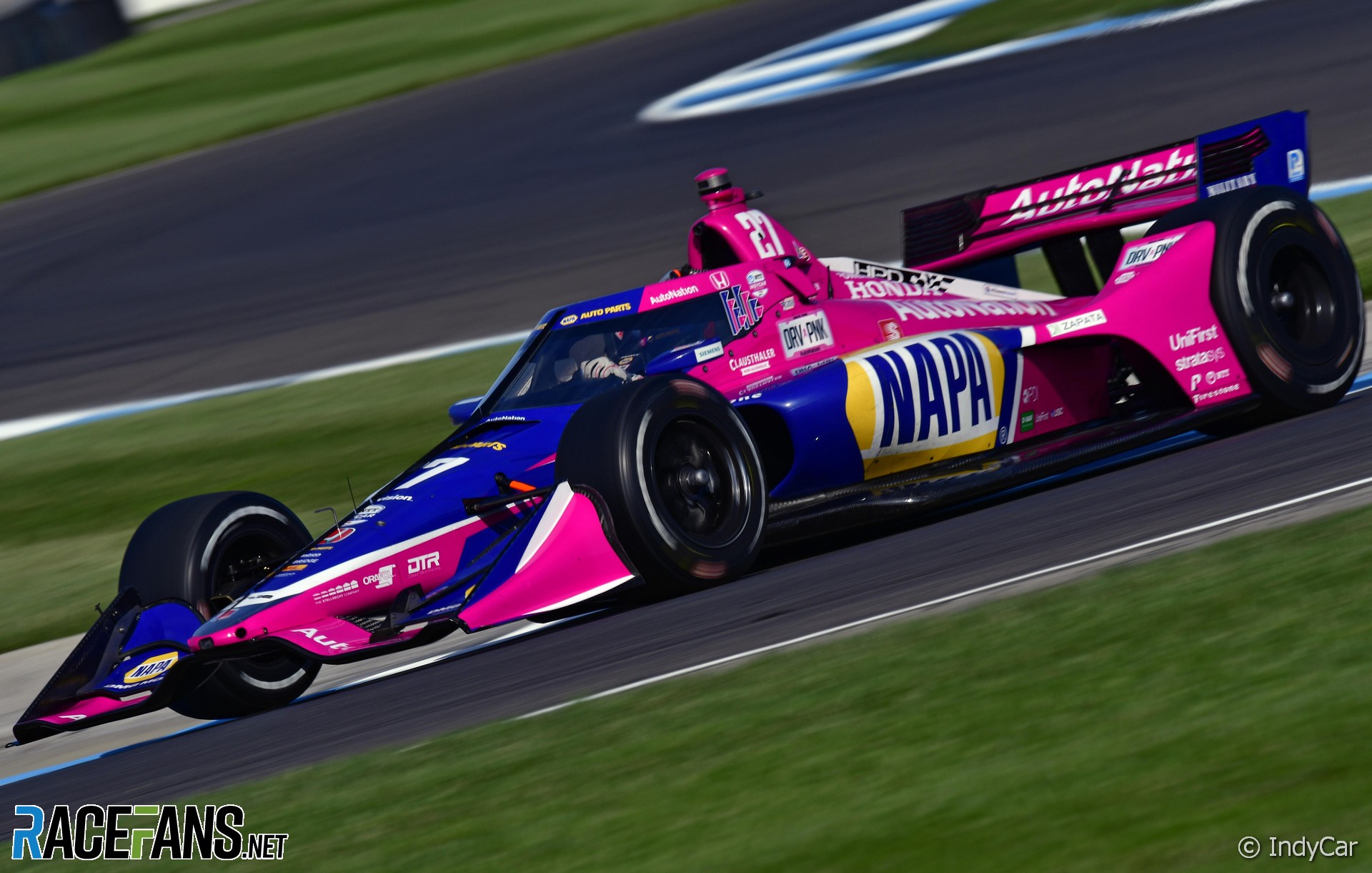 In the round-up: Alexander Rossi has kept his victory in the Brickyard Grand Prix after his car was found not to comply with the regulations.

Four days after Rossi’s victory on the Indianapolis Motor Speedway road course, IndyCar announced his Andretti team had been fined $25,000 (£20,580) and had 20 points deducted over a violation relating to his car’s water bottle.

While acknowledging Rossi’s car “met minimum requirements” for weight, which is set at 771 kilograms (1,700lbs) for road circuits, IndyCar president Jay Frye said “from a technical perspective, the way they achieved the weight is not allowed.”

“To meet minimum weight, the drink bottle and its contents were used as car ballast, which is not permitted and why the team is being fined and penalised.”

Rossi won Saturday’s race by 3.5 seconds ahead of Christian Lundgaard and Will Power, the latter moving into the lead of the drivers’ championship.

Mercedes’ trackside engineering director Andrew Shovlin explained how the team avoided the difficulties Ferrari faced in the Hungarian Grand Prix by starting pole winner George Russell on a different tyre to their rivals and committing to a more aggressive strategy in a race that presented them with many options.

“We looked at each case separately. With George we wanted him to be out front leading the race,” Shovlin explained. “The conditions were quite tricky, there was a bit of rain in the air, it looked like it was quite cold, could be quite slippy and that soft tyre would give him the best chance of getting off the line cleanly because to keep George’s hopes of winning the race alive we had to be leading that first stint.”

They took a different approach with Lewis Hamilton, who lined up seventh on the grid on medium tyres.

“The argument with Lewis was quite different. We had that DRS problem in qualifying that had meant he was well out of position so the medium tyre gave him better range, it allowed him to overcut, we could go longer and that put him on fresh rubber at the end of the race and ultimately that’s what allowed him to have that pace that could take him all the way to second place.”

Indy Lights, the main feeder series to IndyCar, will be without one of its five teams for this weekend’s support race in Nashville as a driver has defect to a rival squad.

TJ Speed have lost James Roe Jnr to HMD Motorsports, leaving them with no drivers signed. Kyffin Simpson left the team in the previous round to also join HMD.

“I am extremely excited to be joining HMD this coming weekend,” said Roe. “It is a great opportunity for me to immerse myself in their championship-calibre Indy Lights programme.”

Tim Neff, team principal of TJ Speed, will still be in the paddock this weekend and will provide engineering support to another rival team, Abel Motorsports.

McLaren junior Ugo Ugochukwu, currently racing in British Formula 4 with Carlin, will make his European racing debut this weekend at the Nurburgring, taking the place of Rafael Camara at the crack Prema team in Germany’s ADAC F4 series.

Camara has been ruled out of racing for the time being as he has tested positive for Covid-19, but is due to return, while Ugochukwu has signed a multi-event deal with Prema that will mean he will race for the team again either in the ADAC or Italian F4 championships on race weekends that do not clash with his British F4 campaign. He is currently third in the points in that championship.

Sounds of the track (F1 Manager)

Karthikeyan predicts a long innings for Alonso (The Hindu)

'Alonso has a lot of motivation left in him; he is beating drivers half his age. It is incredible. He has left F1 to do a bunch of other things like IndyCar, but he has always returned strongly to Formula 1.'

The house of Zanardi victim of a fire (Autohebdo)

'A fire broke out in the villa of the double CART champion during the afternoon. According to the first elements of the investigation, reported by local media such as Il Resto del Carlino, the photovoltaic system would be responsible. Fortunately, the fire did not cause serious damage thanks to the intervention of the firefighters.'

'The piece, which is made from carbon fibre and foam, will incorporate lessons taken from crashes encountered during the aeroscreen era, where some drivers have been observed moving higher than desired in the cockpit in certain impacts.'

'I think Rafa Camara is an outstanding young driver from Brazil. I love him, he’s very fast. Those were the fulsome words of Emerson Fittipaldi, describing a single-seater rookie who already has Ferrari's backing.'

'(Webber and Seidl) have remained close friends and it is understood that Piastri has signed a pre-contract agreement with McLaren.'

'Ecclestone amassed a vast personal fortune while running F1, and is today worth an estimated £2.5bn. According to German court papers obtained by BBC Panorama in 2014, he reportedly receives divorce maintenance payments of around $100mn (£81.4mn) each year from his ex-wife.'

Andretti's entry into Formula 1: the deadline is near (Speedweek)

'Andretti marketing director Jean-Francois Thormann talks about the date for the intended entry into Formula 1 and explains: We are not waiting for the final version of the rules from 2026.'

Getting those laps in. 🤩@HulkHulkenberg soaking in the Hungaroring at the @pirellisport #F1 tyre test! pic.twitter.com/E8yS1vlLaS

Daniel Ricciardo wants a break, but he may spend the summer sorting out his future position in F1. Some suspect that won’t mean remaining in a cockpit:

I think Ricciardo has a fantastic future as part of a race broadcast team but I don’t see how he fits in at the top of F1 anymore.

That is quite hard for me to write because I have been a fan of his for his entire career but I don’t think he has “it” anymore as a driver in a top team. Sure, he could go to a backmarker team and rake in some money for a few years, but I’m not sure I see him going down that route. He wants to fight for wins at the very least.

If whoever picks up the TV broadcasting rights in the US doesn’t use the Sky feed in the future, they would be absolute fools to not hire Ricciardo for their team. He loves the US and the US loves him.
Leroy