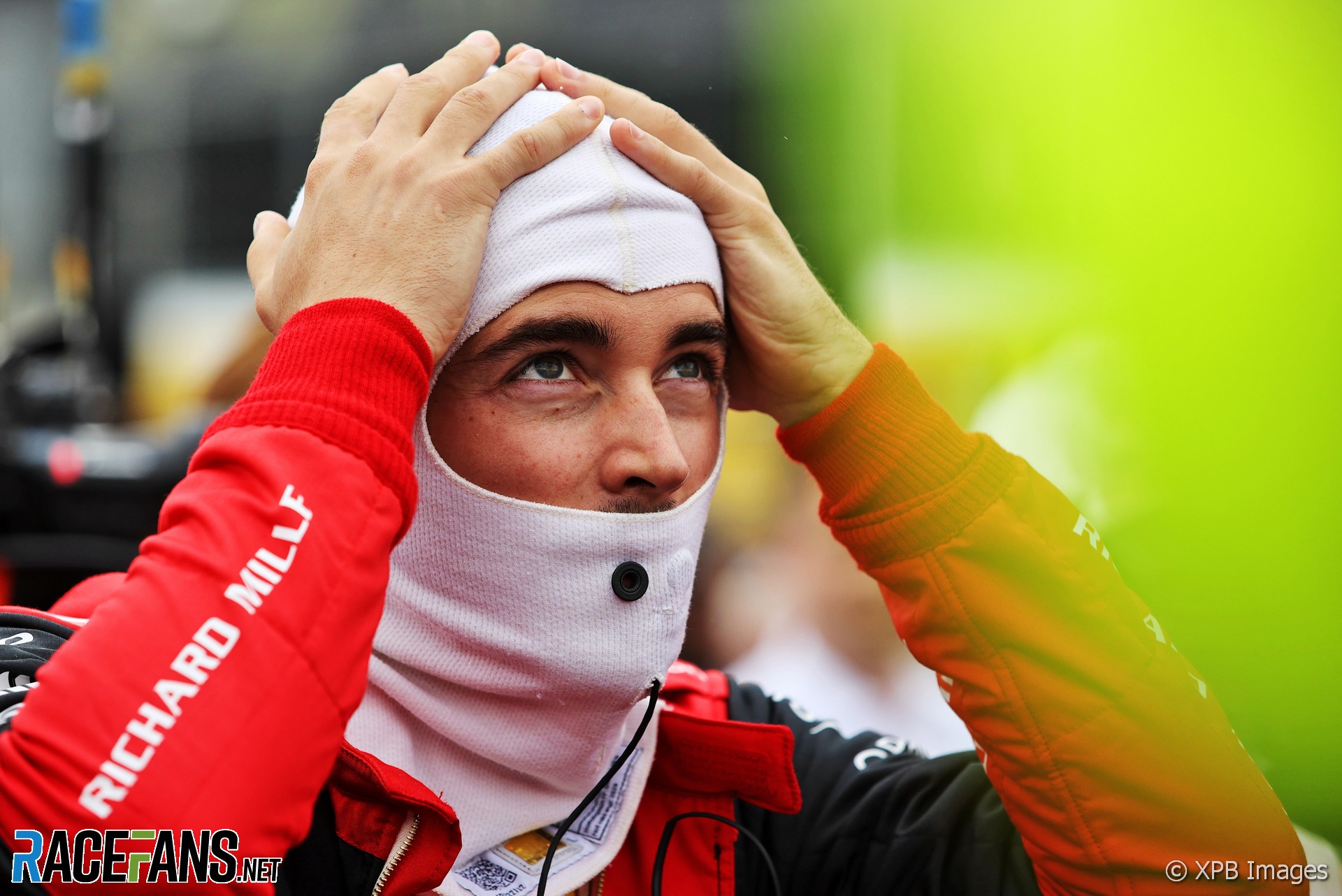 Disastrous race weekends for Ferrari have seemingly become the ‘new normal’. The Hungarian Grand Prix was the latest example, as Charles Leclerc was once again left defending his team’s questionable tactics during the race on Sunday.

Having started third on the grid behind team mate Carlos Sainz Jnr, Leclerc settled in well on his medium tyres and jumped his team mate when they made their first pit stops. Next he swept past George Russell, who had started on pole, for the lead of the race.

But disaster struck when Ferrari brought Leclerc in for a second time to fit a set of hard tyres. This was a reaction to his championship rival Max Verstappen’s stop and put Leclerc on a tyre they had not run all weekend.

In the unexpectedly cool conditions, Leclerc couldn’t generate enough heat in the tyre, and Verstappen breezed past. Forced to make a third stop for softs, Leclerc had to settle for sixth place, throwing away more precious points in his increasingly doomed championship fight against Verstappen – who won the race despite starting all the way down in tenth.

Speaking after the race, Ferrari team principal Mattia Binotto defended their strategy. “When we fitted the hard, our simulation was that it could have been a difficult couple of laps of warm-up, slower than the medium for 10-11 laps, and then it would have come back and been faster by the end of the stint – and it was a 30-lap stint,” he explained.

Ferrari’s expectation the tyre would come in later in the stint proved incorrect, and Leclerc paid the price. Binotto also insisted the car’s performance had not been up to its usual level, describing Hungary as the first race all year Ferrari weren’t quick enough to win.

Unfortunately for Ferrari, errors such as these have been a running theme. And it’s not just their questionable tactical calls which have left Red Bull running away with the title, but driving mistakes and unreliability too.

Ferrari made a positive start to the season. Three races in, Leclerc had two wins and a second place, propelling him into a healthy championship lead. Their first costly setback in the drivers’ title battle came at Imola, when Leclerc spun while running third. He finished sixth and dropped seven points to race winner Verstappen.

That was followed up by a retirement in Spain due to an engine failure while Leclerc was leading the race. Again, Verstappen bagged the 25 points, and with it the championship lead.

A wet Monaco Grand Prix saw a strategy error from the team when they switched from the wets too early and had a botched double-stacked pitstop which cost both drivers time. While Sergio Perez won, Leclerc lost more ground to third-placed Verstappen.

Both Ferraris retired in Baku after another engine failure for Leclerc – again, while he was leading – and Sainz suffering a hydraulic problem. Verstappen won.

Leclerc suffered the hangover from that race in Canada, where engine change penalties confined him to the back of the grid. He finished fifth while Sainz unsuccessfully pursued winner Verstappen.

The British Grand saw success for Sainz, who won the race ahead of Perez, but Leclerc, who had initially taken the lead, was left fourth after Ferrari opted not to pit him under a late Safety Car. As a result, he only took six points off Verstappen when it could – and perhaps should – have been much more.

While much of the blame for Leclerc’s woes up to this point lay with the team, that wasn’t the case in France. Having seen off an early attack from Verstappen, Leclerc lost the back end of the Ferrari and spun into the barriers.

Speaking after the race, now 63 points behind his rival, the dejected Leclerc claimed he didn’t deserve the championship with mistakes like that.

“I feel like I’m performing at probably the highest level of my career since the beginning of the season,” he said. “But there’s no point of performing at a very high level if then I do those mistakes.

“At the end of the year we will count back and if there are 32 points missing then I know it’s coming from me and I did not deserve to win the championship. But for the second half of the season I need to get on top of those things if I want to be a world championship.”

A penalty for an unsafe release confined Sainz to fifth. Piling error upon error, his race engineer initially described his sanction as a much more serious “stop and go penalty” – the driver swiftly put him right.

Any hopes Ferrari would go into the summer break on a high were dashed at the Hungaroring, where second and third on the grid translated into fourth and sixth at the flag. Many were baffled by Ferrari’s decision to put Leclerc on the hard tyre after Verstappen pitted.

That included the driver himself. “I said that I wanted medium as long as possible,” he told media including RaceFans after the race. “We need to understand why we went on the hard because I made it clear that medium, I wanted to keep it as long as possible but we pitted very early for the hard.

“But then on the hard obviously we lost all the pace. We did one stop more than everybody, losing 20 seconds, plus the five or six laps on the hard we were losing a second per lap, so this is a lot of race time.”

Perez however did have sympathy for his rival team after the errors at the Hungarian Grand Prix.

”I think always, after the race, it’s very easy to point [the] finger and say, ‘What a mistake they’ve [made]’,” Perez said when asked by RaceFans. “But in the heat of the moment, we are all prone to make those mistakes. We live in such tiny margins that these things can happen.”

But errors of one type or another are happening far too frequently at Ferrari. Leclerc still believes the team can win championships, but admits they need to make further improvements to how they perform as a team.

“Looking where we are coming from in the last two years, I do believe that it’s an incredible step forward,” he said.

“On the other hand, obviously, there’s another step that we need to do and we are working on that, but I’m confident that we will do it.”

Ferrari, Formula 1’s longest continually-running team, is undoubtedly capable of winning championships. They have won the constructors’ championship 16 times, while 15 drivers’ titles have been won in their cars.

Yet it would be no exaggeration to say they are throwing away the 2022 chmapionship to Red Bull. Frustratingly for the team, Verstappen has taken 126 points out of Leclerc in 10 races.

Ferrari’s 2022 season is a demonstration that building a race-winning car is not enough to guarantee a championship. Over those 10 races reliability problems, driver errors and tactical mistakes have all-but assured they will have to wait another year to end a championship drought which stretches back to 2008.

The summer break will bring some much-needed respite. Ferrari need to come to terms with the mistakes which have been made, come back from it stronger and start delivering on their obvious championship-winning potential.

55 comments on “How to lose a season in 10 races: Ferrari’s staggering reversal in fortunes”