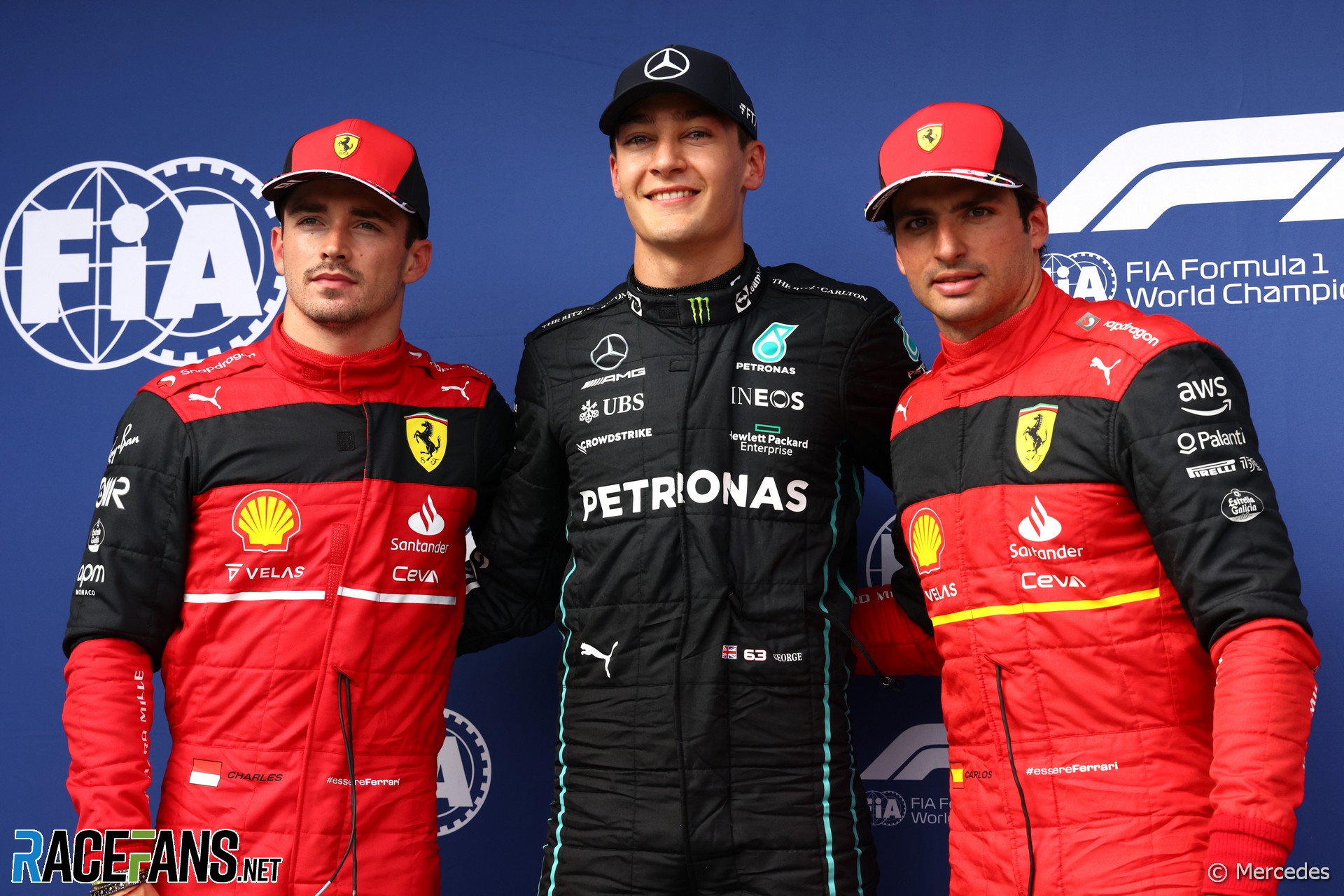 On the back of Ferrari’s strongest Friday – and Red Bull’s weakest – for many months in Hungary, cynical observers questioned just how Ferrari would manage to end up being beaten to pole position on Saturday.

As it turned out, those expectations were well founded. But it was not Max Verstappen who denied Carlos Sainz Jnr and Charles Leclerc pole position at the Hungaroring and nor was it Sergio Perez. It was not even the man with the most poles in the history of Formula 1 – Lewis Hamilton.

Instead, Ferrari were stunned by George Russell, who delivered a fantastic final lap to deny Sainz and take a shock maiden pole position of his career, despite not setting a single fastest sector in the process. For Mercedes, it was a stunning turnaround from their poor Friday – and no one was more stunned than the team themselves.

Before qualifying, all signs had pointed to the tight Hungaroring and the cool conditions compounding the W13’s weaknesses. But what had Mercedes actually done to their car, RaceFans asked the pole winner, to bring out this bizzarro-W13 that had provided them pole position where they should have least expected it?

“Well, we made a big step forward – so I’m not going to tell you about that!,” Russell

“In Formula 1, it’s [about] fine margins and there’s so many fine margins and so many different aspects and when you get everything into that perfect window, the car can just fly. Equally, if one thing is just out, it can compromise everything.”

Mercedes getting into that “perfect window” would have been more obvious had Lewis Hamilton not been compromised by a DRS fault on his final run, likely preventing him from ending up a lot closer to his team mate than the seventh place he will start Sunday’s race from.

“My DRS stopped working, which was frustrating after all the struggle we had to finally have the chance to fight for front row but then not being able to, because of the issues with the DRS,” Hamilton said. “We don’t know where our pace all of a sudden just came from. It came from nowhere.”

Having looked so strong over single lap and long runs on Friday, Ferrari were not hiding their disappointment at missing out on locking out the front row – especially with Max Verstappen due to start from the middle of the pack.

“We are certainly not particularly happy about today, the way the car and everything was handling,” admitted Sainz. “With a perfect lap, I could have put it up there. So, that’s why I’m a bit disappointed.”

Leclerc explained how Ferrari had been caught out by the track gradually warming over the course of the hour as the sun continued to dry out what had earlier been a sodden circuit.

Russell beating Ferrari over one lap when the stars apparently aligned to give him the perfect scenario to do so is no less impressive for it. However, keeping that advantage over 70 laps will be one of the hardest challenges Russell has faced in his entire racing career, even if the driver on pole has a significant advantage around a track that has often proved difficult to pass around.

“Our high fuel pace was probably the worst it’s ever been yesterday and Ferrari look pretty exceptional,” Russell explained. “We’re behind the curve at the moment, but we’ll be absolutely going for it. Victory is what we’re going for.”

While Ferrari could likely still hold an advantage over Russell in terms of race pace, they certainly have the advantage of numbers. If they cannot dispatch Russell at the start or early in the race, then they can simply split strategies between Sainz and Leclerc to give themselves the best possibility of getting at least one car ahead during the pit stop cycle. Especially as the Mercedes has typically struggled with warming its tyres so far this season – although not that the W13 was behaving typically on Saturday.

Asked what he needed to do to get ahead of the Mercedes on Sunday, Sainz said “I guess get a good start first of all and then nail the tyre management.

“I think it’s going to be quite tricky,” Sainz continued. “There was quite a lot of deg yesterday, on all tyres. The race pace of the Merc is going to be an unknown and we don’t know if they’re going to be as quick as today or not.”

Behind Sainz, Leclerc will naturally want to get ahead of both his team mate and the Mercedes. But he will also need no reminder of what a good opportunity he has to take a much needed bite out of Verstappen’s championship lead heading into the summer break. With that in mind, would Ferrari contemplate team orders to prioritise Leclerc over his team mate?

“I don’t think there’s anything needed there,” Leclerc insisted. “Just obviously not taking any risk in between cars, But that’s normal. So, I don’t think anything special for tomorrow, no.”

Until Saturday evening, Lando Norris’s McLaren had looked the closest match to the top three of Leclerc, Sainz and Verstappen. However, after still securing a very strong second row start for Sunday, Norris was reluctantly realistic about his race prospects.

“I don’t think there’ll be many chances to go forward,” Norris said. “Everyone ahead of me is much quicker.

“Considering George was four tenths ahead of me, Lewis is driving the same car, so he should be a lot quicker tomorrow. And then Verstappen and Perez are in much quicker cars, so it’ll be a tough race.”

Behind Norris on the grid will be McLaren’s closest rivals – the Alpine duo of Esteban Ocon and Fernando Alonso. Last year on his way to victory, Ocon had benefited immensely from keeping his cool on the run to turn one and watching chaos unfold in front of him. He says he is more than prepared to do the same on Sunday.

“We are not far from the podium places, so if people attack themselves at the front, we’ll be there to pick up the pieces,” he said.

Down in seventh on the grid, Hamilton knows catching up to his team mate in the race will be a tall order. However, he appears more than confident that Russell has more than a slim chance of keeping the Ferraris at bay over the 70 laps – with or without his help.

“I’ll do what I can tomorrow to support him,” Hamilton said. “He should be able to win from that position at this track and I’ll try and work my way up.”

Verstappen’s qualifying power unit woes may have restricted him to only tenth on the grid, but few would count out the championship leader from making similar progress up the field as Sainz did from twice as far back on the grid last weekend. A prospect made more difficult by his long run pace on Friday being significantly slower than Ferrari’s, suggesting he will struggle to match Sainz and Leclerc even if he does make quick progress up the order.

“It’s going to be a bit tough for me, but anything is possible – I think a lot of Sundays have shown that already this year,” Verstappen said. “But around here it’s hard to pass. We’ll stay patient and see what happens.”

The cooler conditions for Sunday will also open up more strategies which could prove critical given how important track position can be around the Hungaroring. Pirelli expect the milder weather could open up the soft tyre as a viable race compound and believe that a one stop strategy with heavy emphasis on tyre management or a two stop strategy switching between the softs and the mediums might be the best way to go.

With so many unknowns heading into the Hungarian Grand Prix, there appear to be just as many reasons why Russell could miss out on converting his first career pole into a maiden grand prix victory than there are to suggest he will become the sport’s 113th race winner. But just having any genuine chance is all the motivation Russell will need on Sunday.

“This is why I wake up every single day and I want to be world champion,” he said. “Because feeling like this is something you can’t really dream of.”

When did we last have a grid which set up as intriguing a race as this? Who do you think is the most realistic contender to win the last race before the summer break?

Share your views on the Hungarian Grand Prix in the comments.

10 comments on “Is Mercedes’ mystery “big step forward” enough for Russell to see off both Ferraris?”