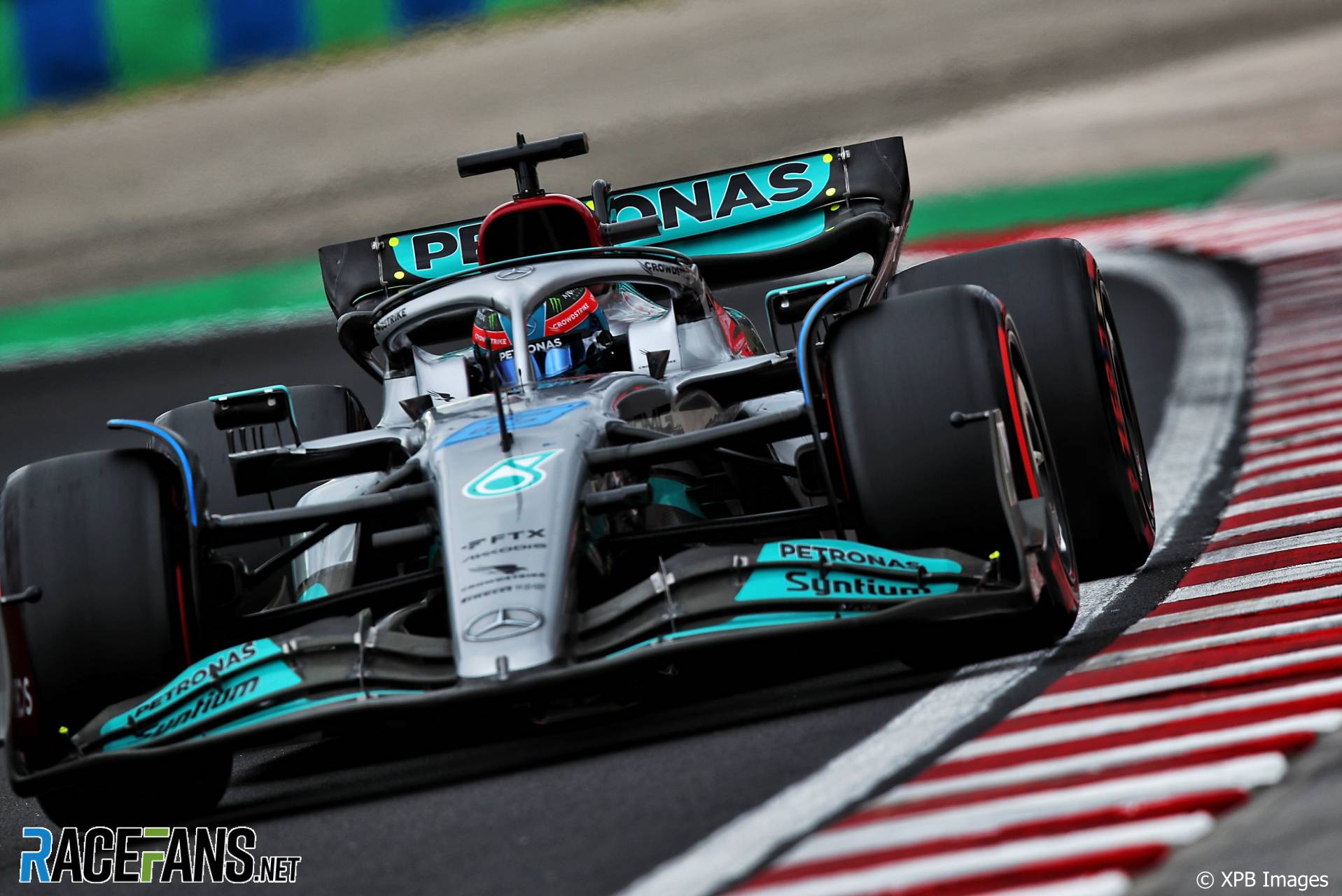 George Russell secured his maiden career pole position in Formula 1 to deny a Ferrari one-two at the Hungaroring, while Max Verstappen fell to tenth on the grid.

Carlos Sainz Jnr had been on provisional pole position and had improved on his final lap at the chequered flag ahead of team mate Charles Leclerc, but Russell’s final effort was good enough to beat both Ferraris and take pole position by just four hundredths of a second, with Lando Norris taking fourth place on the grid.

A mistake on Verstappen’s first flying lap left him under pressure, but a loss of power on his final run left him unable to improve, leaving him stranded in tenth place.

After the third and final practice session was run in wet conditions for its entirety, the track was more than dry enough for slick tyres when the drivers headed out onto the Hungaroring for the first phase of qualifying. The front running teams did not rush out onto the circuit at first, allowing those in the midfield a clearer track to set some early times.

Eventually, Max Verstappen took to the track and set the fastest time of the session with a 1’19.020, ahead of Lando Norris in the McLaren. By the time the Ferraris set their first flying laps, Carlos Sainz Jnr could only manage fourth behind George Russell’s Mercedes.

Verstappen continued to improve his own fastest time, getting as low as a 1’18.509. Sainz improved to sit within half a tenth of the Red Bull in second, while Charles Leclerc moved into third place, a quarter of a second slower than Verstappen’s best.

In the final minutes of the session, the drivers in the drop zone had all returned to the pits after their earlier runs, rather than stay on track. Alexander Albon, Valtteri Bottas, Esteban Ocon, Daniel Ricciardo were all at risk of elimination along with last-placed Yuki Tsunoda whose best time was deleted for exceeding track limits at turn five.

Bottas, Ocon and Ricciardo all managed to improve by enough to go safe, dropping Sebastian Vettel, Pierre Gasly and Nicholas Latifi into danger. Gasly exceeded the track limits on the exit of turn five and had his final time deleted, meaning he fell back into the drop zone and at risk of elimination in 19th. Vettel failed to improve by enough and was also out in 18th, much to his disappointment after he helped his Aston Martin mechanics repair his car after his final practice crash.

By the time all drivers had completed their final laps, those knocked out were Tsunoda, Albon, Vettel, Gasly and Latifi. The latter lost a chance of progressing into Q2 with a mistake at the final corner, ruining what would have been a major improvement.

Haas pair Kevin Magnussen and Mick Schumacher, plus the two Mercedes of George Russell and Lewis Hamilton, were the first cars out onto the circuit as the second stage of qualifying began. Red Bull and Ferrari also wasted little time in joining them, keen to set some early laps.

On used soft tyres, Hamilton crossed the line to set a 1’19.063, which was immediately beaten by team mate Russell and the two Ferraris of Leclerc and Sainz. Norris then jumped ahead of everyone with a 1’18.121, before Verstappen went even quicker and broke into the 1’17s for the first time with a 1’17.703 to go quickest by four tenths.

Sergio Perez initially took third, but had his first time was deleted when the stewards ruled he had breached track limits on the exit of turn five. But replays showed the Red Bull’s inside wheels had clearly remained in contact with the white line, and the stewards eventually reinstated Perez’s time and therefore position.

With five minutes remaining, both Ferraris needed to improve to avoid the threat of elimination. Lance Stroll and the two Haas drivers also sat at the bottom of the times, with Magnussen only improving to move up to 13th, still in danger. Ocon and Bottas fell into the drop zone as the Ferraris improved.

Despite his time being reinstated, Perez nonetheless still failed to make the cut. He briefly encountered Magnussen at the apex of turn two on his final lap, kept going, yet missed the cut by less than a tenth of a second. Afterwards the unhappy Red Bull driver blamed Magnussen for costing him a place in Q3.

Zhou Guanyu was now on the bubble in tenth. He was knocked out for good when both Ocon and Bottas improved, putting the Alfa Romeo down to 12th. Joining Perez and Zhou were Haas pair Magnussen and Schumacher, who were split by Stroll’s Aston Martin in 14th place.

The track was at its driest as the final phase of qualifying began. The Ferraris of Leclerc and Sainz were the first of the pole position contenders out on the track, with Leclerc setting the initial benchmark with a 1’17.985.

That was comfortably beaten his team mate Sainz by almost half a second, setting the fastest lap of the weekend with a 1’17.505 in the process. Norris could not trouble the Ferraris with his first effort, ending up a second slower than Sainz, while Russell put his Mercedes into a provisional second place, a blink of an eye ahead of Leclerc, with Mercedes team mate Hamilton moving into fourth.

Verstappen could only manage seventh after his first effort, largely caused by a lock-up into turn two that caused him to run very wide into the long left-hander. He returned to the pit lane complaining of poor grip in his Red Bull.

Drivers headed back out with around three minutes of time remaining for their final runs in qualifying. On his out-lap, Verstappen reported a loss of power on his Red Bull power unit. His team offered multiple settings to change to try and fix the problem, but nothing would give him his full power and he eventually abandoned his final lap, dropping down to tenth place.

Leclerc improved but only by enough to move ahead of Russell into second behind his team mate. Then Sainz went even quicker on his final lap to push his provisional pole position time lower by almost a tenth of a second. Norris improved on all three sectors to jump into third place behind the two Ferraris.

The only driver left who could affect disrupt the top three was Russell in the Mercedes. Russell was improving in each sector but not going fastest. However, when he crossed the line, his 1’17.377 was still good enough for him to snatch pole position ahead of the Ferraris by just 0.044s.

Russell therefore secured his career first pole and will line up ahead of the two Ferraris of Sainz and Leclerc for tomorrow’s race. Norris will start on the second row in fourth, ahead of the two Alpines of Ocon and Alonso.

Hamilton will start seventh ahead of former team mate Valtteri Bottas in the Alfa Romeo. Daniel Ricciardo qualified in ninth place, with Verstappen falling to tenth place after his error on his first lap and his power unit problems on his final run