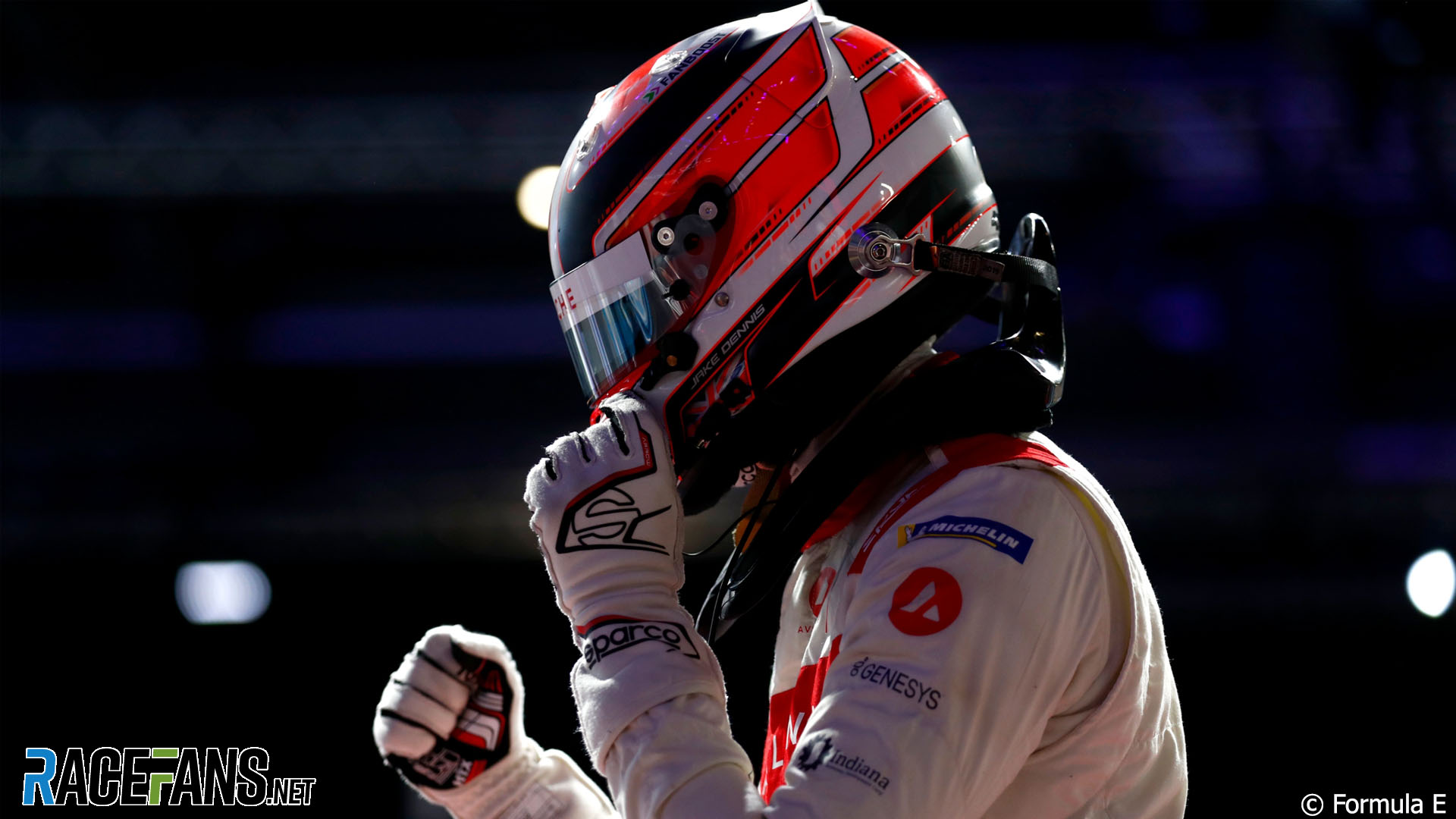 Jake Dennis won the first London EPrix of the weekend having taken a confident pole and led every lap, while rivals behind him clashed.

Dennis had taken his second career pole, beating Stoffel Vandoorne in the qualifying final. Nyck de Vries and Sergio Sette Camara made up the second row, the Dragon driver having put in an impressive one-lap performance despite an uncompetitive race car.

Attack Mode was set for two activations of six minutes for the first race of the double-header. Teams had been informed the previous day that usable energy for the London races would be limited to 46kWh, a six kilowatt hour reduction from the usual race allowance.

Sam Bird, Mitch Evans and Edoardo Mortara collided at the start, with bodywork flying from the Venturi and Bird immediately out of the race after the first corner. Mortara also plummeted down the order, forced into the pits with damage and with large chunks of carbon fibre from his front wing, including the wheel covers, strewn along the pit straight.

At the start of lap four, Sette Camara managed a move up the inside of turn one to rob De Vries of third. The Mercedes driver had locked up severely on the previous lap while going through the Custom House section.

De Vries was the first of the top four to activate Attack Mode, claiming third back from Sette Camara when the Dragon driver went to activate his. Dennis and Vandoorne followed each other through the activation zone, staying in order and Sette Camara was unable to overtake De Vries again during their first Attack Mode phase.

Drivers started going for their second activations with 23 minutes remaining, with second-placed Vandoorne instructed to go before Dennis, but Dennis managing to cover him off.

Rowland slowed down and retired from the race with 21 minutes to go, his car visibly damaged from the earlier contact. Sebastian Buemi was given a five-second time penalty for contact with Jean-Eric Vergne, one of many drivers missing parts of bodywork with less than 17 minutes left. Robin Frijns was also hit with a five-second time penalty for moving under braking later in the race and Antonio Giovinazzi given the same for causing a collision with Oliver Turvey. Giovinazzi subsequently became the third retiree from the race. Jean-Eric Vergne was also penalised for a collision with Alexander Sims.

Sette Camara had looked set to score the first points for he and Dragon of 2022 but came to a heart-breaking halt on the final lap, while Maximilian Gunther crawled over the line, giving sixth to Mitch Evans. Evans’ recovery from 14th in qualifying to sixth in the race keeps him in vital title contention, while Mortara finished more than a minute off the lead, his own hopes of challenging Vandoorne for the title suffering a heavy blow.

Dennis crossed the line comfortably ahead, taking a second home victory and third career win in Formula E. Vandoorne and De Vries joined him on the podium, with Dennis also taking points for fastest lap.

Vandoorne is now 26 points ahead of Evans in the championship standings, with three races remaining in the season.