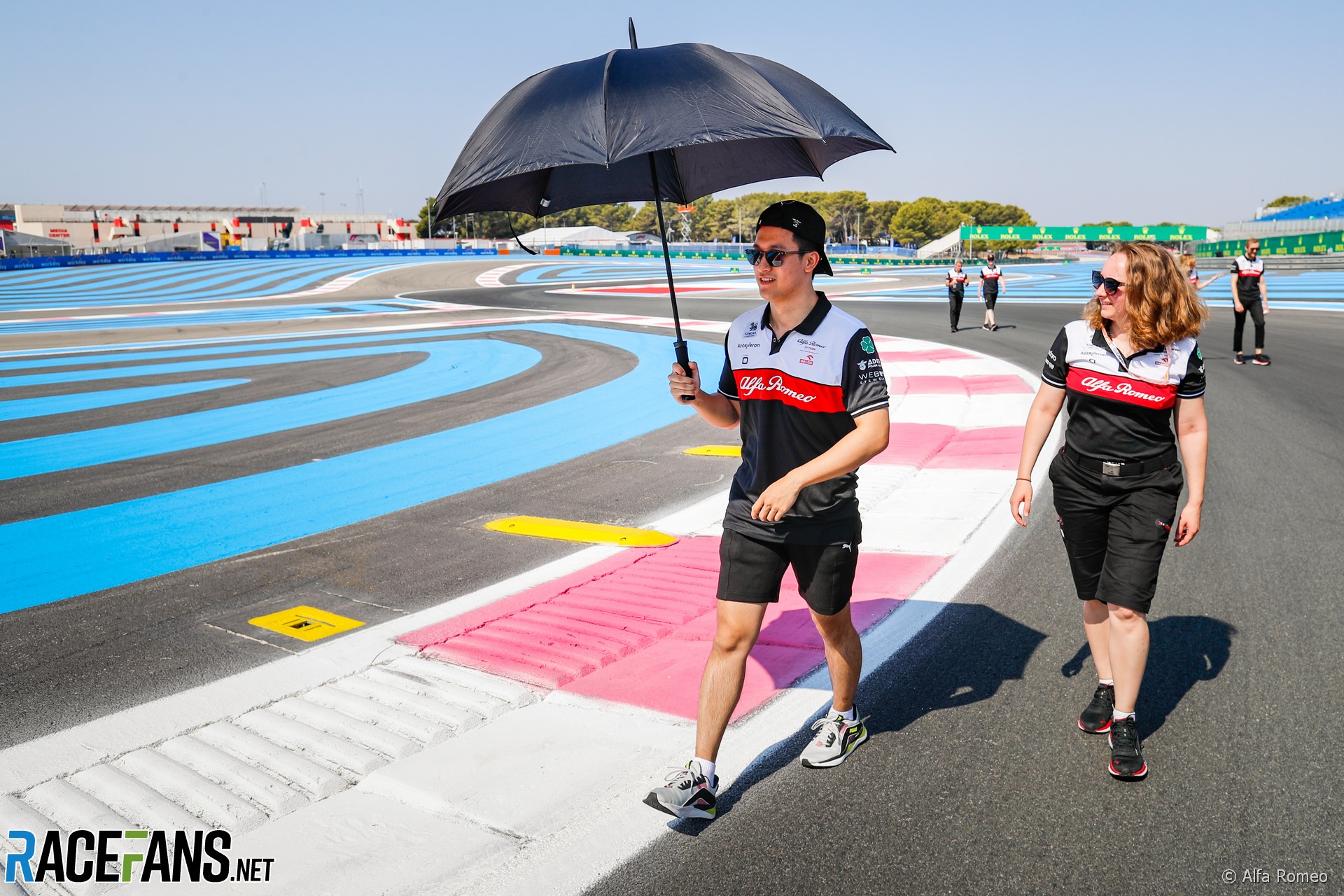 In the round-up: Zhou Guanyu has revealed he has only raced with a drinks system installed on his Alfa Romeo at two rounds of his rookie season so far.

Zhou ‘only used drinks system in Bahrain and Miami’

Alfa Romeo rookie Zhou Guanyu has revealed he only raced with a drinks system installed on his Alfa Romeo at two rounds this season.

This weekend’s French Grand Prix is expected to be the hottest at the circuit since F1 returned to it in 2018. Zhou admitted he has only raced with a drinks system installed in his car on two prior occasions this year.

“Coming to this weekend with the high temperature, for us as a driver, you have to stay hydrated quite a lot,” said Zhou.

“Normally, I don’t actually use the drinks system in the car. The only races I used it were Miami and Bahrain. So I think I’m going to definitely put it on for this weekend.”

Carlos Sainz Jnr says Ferrari are considering whether or not to give him a fifth power unit for this weekend, which will result in him starting from the back of the grid.

Sainz retired from the last round in Austria following a fiery power unit failure. It was his second mechanical related retirement of the season and fourth failure to finish in all. Asked if Ferrari had decided to give Sainz a new power unit for this weekend, Sainz replied “not yet.”

“There’s a chance we will put a new engine in this weekend, which would involve a penalty, but we haven’t taken the final decision yet,” he said.

Williams will “get our chances” for points – Albon

Alexander Albon is confident Williams will have opportunities to score points on pace over the rest of the season but that it will likely depend on the track.

Williams are currently tenth and last in the constructors’ championship on three points – all scored by Albon. Both he and team mate Nicholas Latifi now have the benefit of a major upgrade package to the FW44 and Albon believes the team could find more opportunities to score more points.

“I don’t think it will be every race, but I do feel like there’ll be circuits where we’ll get our chances,” said Albon.

“We’re not at the top yet of what the car can do. But it’s a step forwards. I think Austria, on paper, must be our most competitive race. We had a relatively good race in Austria – we were P12 on pace, more or less. We were keeping up just about with the midfield. So we are getting there and it will come.”

"Hamilton has been trying to persuade all 10 teams to sign up to a diversity and inclusion charter which commits them to taking steps to make progress in the area. But he said one team has so far refused to sign. BBC Sport has learned that team are Williams, who said in response: "We last had conversations with the Royal Academy of Engineering back in March and we are awaiting further information from them on such an important topic, of which we at Williams Racing already have serious active programmes."

"The first night, we went to do dishes at the sanitary tent. They had this big sink, and there were lots of comments about how we were doing what women should be doing—and men bringing their dishes for us to do, because that's what we're ‘useful’ for. It didn't sink in that this was actually quite traumatic until I got home."

"And the truth is that while McLaren and Aston Martin are both famously troubled companies, despite the undoubted excellence of much of what they make, Rolls and Bentley struggles ended the moment they were snapped up by, respectively, BMW and Volkswagen."

"From what I’m hearing, some of the new characteristics that come with the upgrade parts will take a bit of adjustment from my side, so I’m expecting to have to adapt my driving quickly and set up the car in a slightly different way to get around that. But the important point is that the upgrade should bring better lap times. And a few tenths here and there could have made a big difference in recent races and possibly put us in points contention."

"The Scouting Camp organised by the Ferrari Driver Academy, as part of its partnership with the ACI came to an end this afternoon. Taking part were four drivers born between 2006 and 2007. Two of them were put forward by the ACI – the Italians Nicola Lacorte, son of GT racer Roberto and Matteo De Palo – while the other two were selected by Ferrari – the Swede Oscar Pedersen and the Latvian Tomass Stolcermanis."

Daniel Suárez on his dream of NASCAR in Mexico, his relationship with Verstappen (The Athletic)

"We actually got to know each other way more at the Miami race. He’s a great guy. He’s been very successful and he’s very smart. Especially for his age, he’s extremely smart, very focused, very calm. Which I’m not surprised. I mean, he’s been in Formula One already for seven years or so. And he shows that."

Ps: this was a very close second place 😜 https://t.co/1ICCVIDkt0 pic.twitter.com/2befkq33fP

Some light evening entertainment for you… 👀🎻 pic.twitter.com/cggnXbhALF

Haas team boss Guenther Steiner was asked today about a certain ex-sponsor scrapping their branding deal with a Superbike team:

"I don't know how much money this guy's got, at least we got something in the end.

"It was quite obvious what was happening. So was I surprised? No." pic.twitter.com/SIQX8WhS7c

The first draft of sporting regulations for the 2023 Formula 1 season features only three sprint race weekends, requiring a super-majority vote to increase – something reader ‘S’ would be happy to see happen…

I’d rather have more than less. It would then be entirely my choice whether I watched them or not.

And I don’t mind having qualifying on Friday. It’s a good reason to engage on Fridays, rather than skipping two hours of nothing.

And I like the dynamic sprint weekends produce – with teams going into their first competitive session after only one practice session. It’s far more interesting to see them have to treat it more like a sport than a science where they have plenty of ‘rehearsal’ time – sufficient to iron out all the bugs. It’s far more organic with sprints.

One of F1’s biggest problems with quality of racing and predictability (other than car performance parity or lack thereof) is that there’s simply too much practice time at each event. They need less time to learn how to manage their tyre wear, strategy and setup – not more.
‘S’