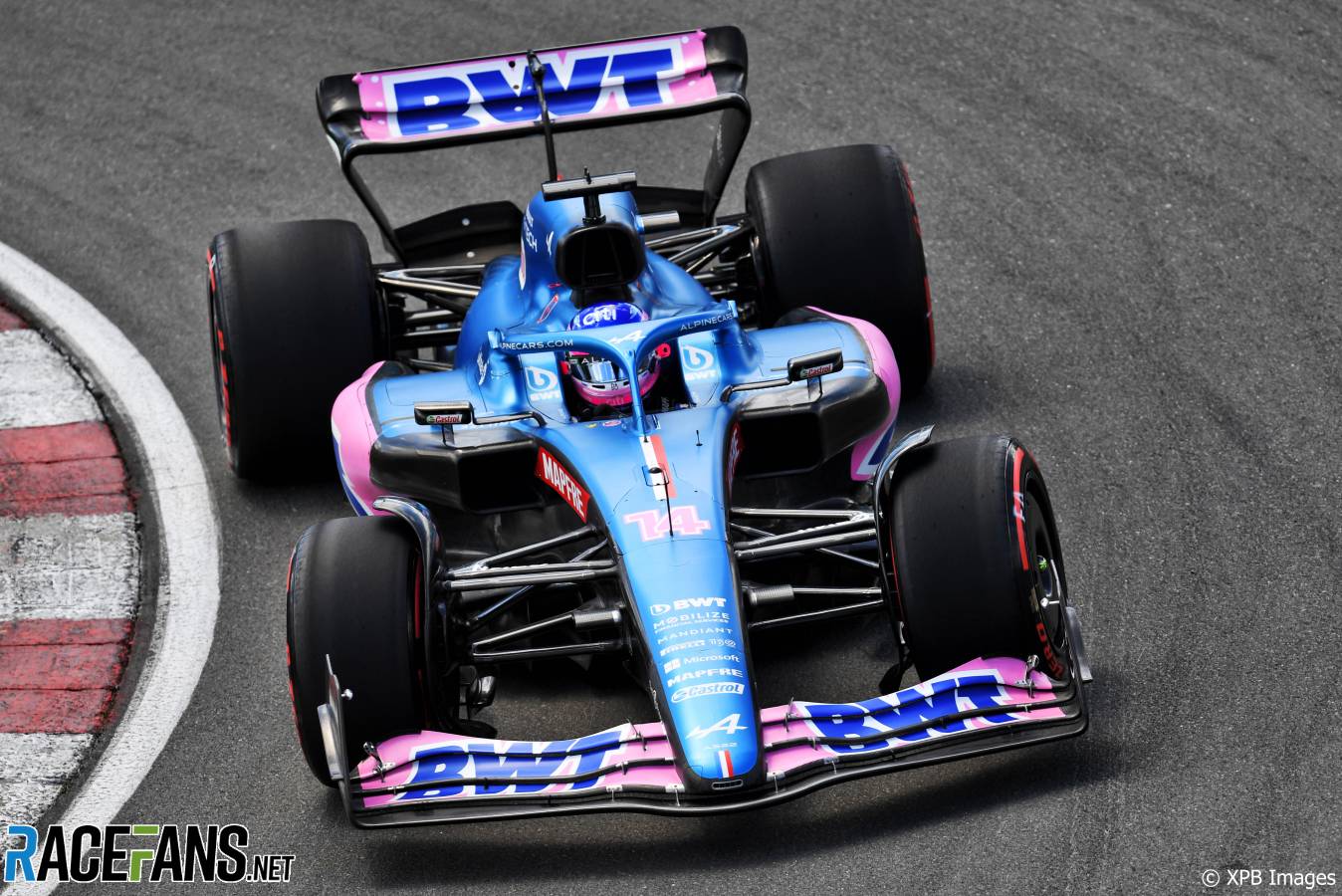 Max Verstappen dominated a rain-hit qualifying session for the Canadian Grand Prix, leading all three segments and taking pole position by a comfortable margin of more than half a second.

He goes into today’s race knowing he has a vital opportunity to extend his championship lead over his closest rivals even further. Sergio Perez who crashed in Q2 languishes down in 13th while Charles Leclerc will start from 19th after changing his power unit.

With that pair out of the picture in the early running it should have fallen to Carlos Sainz Jnr to lead the attack against Verstappen. But for the second weekend running he let himself down on the final lap of Q3. Having been fractionally quicker than Verstappen through the first sector and only lost a small amount of time in the second he chanced too much in the final chicane and ended up not only behind Verstappen but also the surprise occupant of the front row.

That is Fernando Alonso who has been competitive from the off in his Alpine and sprang ahead of Sainz by claiming a place alongside Verstappen. And he left no one in any doubt what he intends to do at the start of the race.

But despite his keenness to take the lead of the race – something he’s only done once in the past five seasons, Alonso admits “to think about winning is completely unrealistic” for Alpine.

From his second-place grid spot Alonso has a clear opportunity to throw it down the inside of Verstappen at the quick left-hander which opens the lap. No doubt the Alpine driver will have made the calculation that Verstappen, with a title fight on his hands, is not going to risk a collision with him.

Alonso has made some strong starts this year, gaining five places from the back of the grid in Spain and four in Miami. “I know he starts very well,” Verstappen acknowledged, “so I have to be ready.”

Verstappen should also be wary of the possibility Alonso will reprise his start tactics from Sochi last year. He made significant gains by driving through the run-off area at the first true corner.

Today he can risk breaking heroically late for turn one in the expectation that he will be able to rejoin the track, likely in the lead of the race. The stewards may give him a five-second time penalty but that could be a price worth paying in order to have clear track ahead of him while the cars he is most focused on beating – Mercedes, Haas and the rest – lose ground as the field spreads out behind.

Alonso could put himself in an even stronger position to attack Verstappen if he opts to start the race on soft tyres. However which compounds will be best suited to the race is something of an unknown. That wasn’t much graining on the soft tyre on Friday, particularly in second practice once the track had rubbered in, but since then the surface has been washed clean by heavy rain.

Sainz believes that whether Alonso ends the first lap in front of Verstappen or behind him could make or break his race. “It will all depend on the start,” said the Ferrari driver. “If we can get a good start and get the straight behind Max, then I think we just can try and follow and put some pressure.

“But if you lose a bit of time in the first five or 10 laps, maybe Fernando does a good start, then the gap could be big enough that then you’re just a bit too far behind for the rest of the of the race.”

Ferrari’s lap times in practise gave Sainz encouragement that they will be quick enough to race Red Bull if they aren’t compromised by Alonso: “Will we have the pace to fight Max? According to Friday, it should be close.

“Obviously we know in the race, they’re always very strong on tyre management. But I think we can still be there.”

What Perez and Leclerc can salvage from today’s race is going to be strongly influenced by how easy they are able to overtake. Despite its ample straights, the Circuit Gilles Villeneuve is not always the easiest track to pass on, especially when queues of drivers form DRS trains.

The drivers did well to keep their cars out of the walls in practice as many of them found the new generation of Formula 1 cars do not ride the kerbs well. The threat of a Safety Car deployment at this track is significant as there are several places where an error can lead to a crash.

The smart move for a driver in Leclerc’s position may be to start on hards and run as long as possible in the hope that a late Safety Car allows a low-cost pitstop, a tactic which paid off handsomely for Daniel Ricciardo last weekend. But unless Verstappen trips over Alonso, the best Leclerc can realistically hope for is to limit the ongoing damage to his championship lead.

Will Alonso make good on his promise to take the lead at the start? Can Sainz take the fight to Verstappen? And where will Perez and Leclerc finish?

Share your views on the Canadian Grand Prix in the comments.