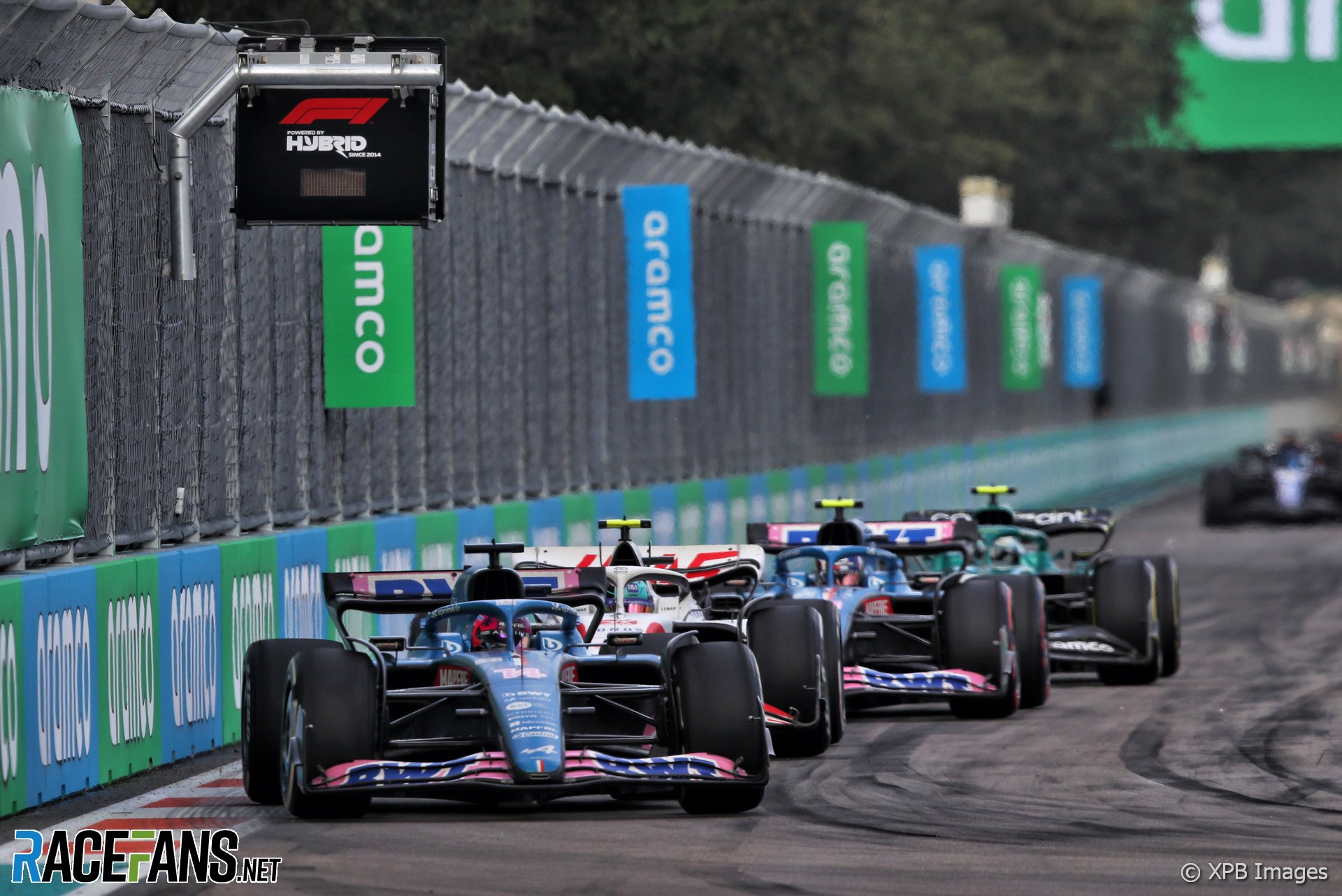 Alpine CEO Laurent Rossi has complained the team was not allowed to dispute the penalty which cost Fernando Alonso a points finish in the Miami Grand Prix.

Alonso was penalised during Sunday’s race and again after it. The second penalty dropped him from ninth in the finishing order to 11th, costing him what would have been his second points finish of the year.

The stewards gave Alonso his second five-second time penalty of the race after he cut across the chicane at turns 14 and 15 on lap 53. This had a significant effect on the cars behind him.

Alonso was being pursued by Mick Schumacher, team mate Esteban Ocon and Sebastian Vettel at the time. Schumacher had repeatedly been able to use DRS on the preceding laps because he was within one second of Alonso’s Alpine.

After Alonso cut the chicane he was able to reach the DRS detection line following the next corner more than a second before Schumacher. That meant the Haas driver was unable to use DRS and he immediately came under attack from Ocon as a result.

In their statement after the race the stewards stated they consulted video evidence before making their decision. Rossi is unhappy Alpine were not allowed to present a case to them.

“A disappointing post-race penalty for Fernando for leaving the track and gaining an advantage means our six points at the chequered flag turned into four points and it has cost us a deserved double points finish,” he said in a statement issued by the team on Wednesday.

“This one is certainly difficult to accept since Fernando handed back the time during the lap and we were not able to present the evidence to clarify the particular situation before the penalty was issued.

“With the opportunity to explain, we’re very confident Fernando would have kept his ninth place”

Alonso cut the same chicane on a further occasion later in the race. The stewards examined this as well, but judged that “no lasting advantage was gained” and did not penalise him.

Rossi was also unimpressed with the extent of damage caused to Esteban Ocon’s car when he crashed in final practice on Saturday. Ocon lost control of his car at turn 13 and struck a barrier at the following corner.

Carlos Sainz Jnr had hit the same concrete barrier the day before. Drivers asked the FIA to add an impact-absorbing TecPro barrier at the scene of his crash, but no change was made.

Ocon sustained a 51G impact in his crash, which cracked his Alpine’s chassis, and left him unable to participate in qualifying. He took place in the race, but said he felt “50% physically” following the crash.

Rossi believes the standard of barrier was insufficient for the crashes which occured there. “Esteban unfortunately missed qualifying, although with sufficient safety measures in place, it is likely the car would have been okay,” he said.