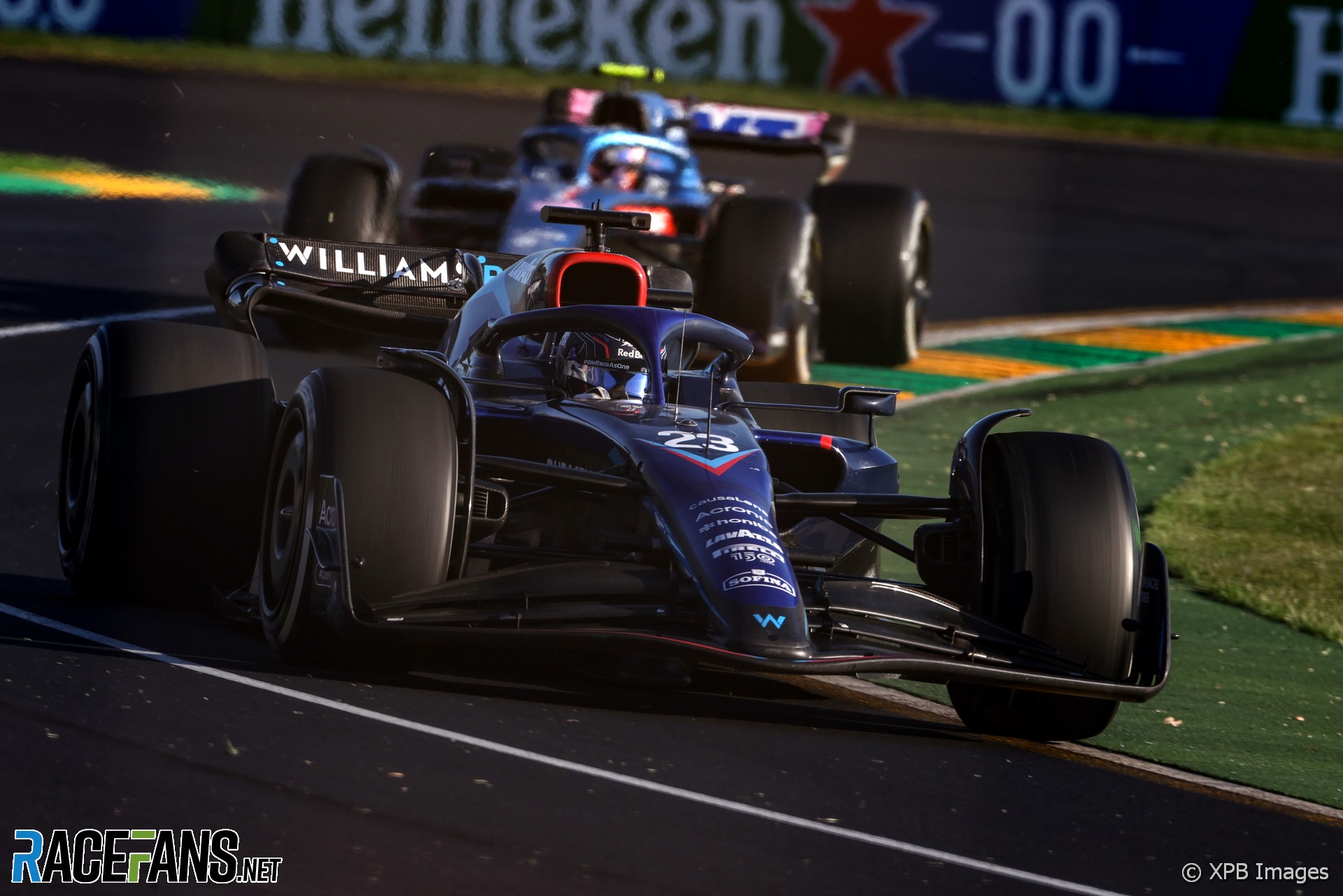 Alexander Albon described his first point for Williams as “completely unimaginable” after the team’s strategist predicted both cars would finish at the back.

The Williams driver ran 57 laps on the same set of hard tyres he started the race on before pitting on the final lap for soft tyres, rejoining ahead of Zhou Guanyu in tenth place and holding the Alfa Romeo off to take the final point.

Albon said that was a much better result than the team had expected. Their pre-race expectations were more pessimistic after Albon was sent to the back of the grid following his disqualification from qualifying.

“It was strange,” Albon said. “It always seems like that C2 tyre suits our car and there’s suiting a car and then there’s that – where it was almost like I felt like I was doing qualifying laps for the last 30 laps of the race. So it’s pretty special.

“I know for a fact we went into the race, the strategist tells you, ‘OK, this is our best performance, this is what we have to do to get the best outcome’ and it was 19th and 20th and it wasn’t pretty. It didn’t look great behind P18, either. And to come out P10 – it’s completely unimaginable. It’s a very special moment.”

Albon ran almost the entire race on the C2 hard compound tyres, which the team did not plan to do before the race. However as the race unfolded they realised it could work.

“I wasn’t asking [to come in] because I knew we were okay on pace,” Albon explained. “I knew that these VSCs and Safety Cars, they’re great times to pit. But we stayed out, we stayed out and then they just basically they said, in code, ‘can we go to the end?’. And I was like, ‘yeah, we can definitely go to the end’.

“In my head, I’m basically doing the strategy. They’re telling me, I know my plan, I know how many laps I’m supposed to be doing and I was surprised we didn’t pit. They kept leaving me out, leaving me out, especially when we had Virtual Safety Cars.”

Albon eventually pitted on the final lap in order to satisfy the requirement to use two different tyre compounds. A slow tyre change meant he rejoined metres in front of Zhou, who was unable to pass the Williams out of turn one, and almost lost control of his Alfa Romeo through turn two.

“I didn’t know how tight it would be, coming out” said Albon. “We had kind of a slow front-left change and it made it quite close with Zhou.

“That’s twice this week we can’t do the numbers,” his race engineer James Urwin said on the radio after the race. “We need to have a go at Rich,” Albon joked, referring to the team’s head of race strategy Richard Lockwood.