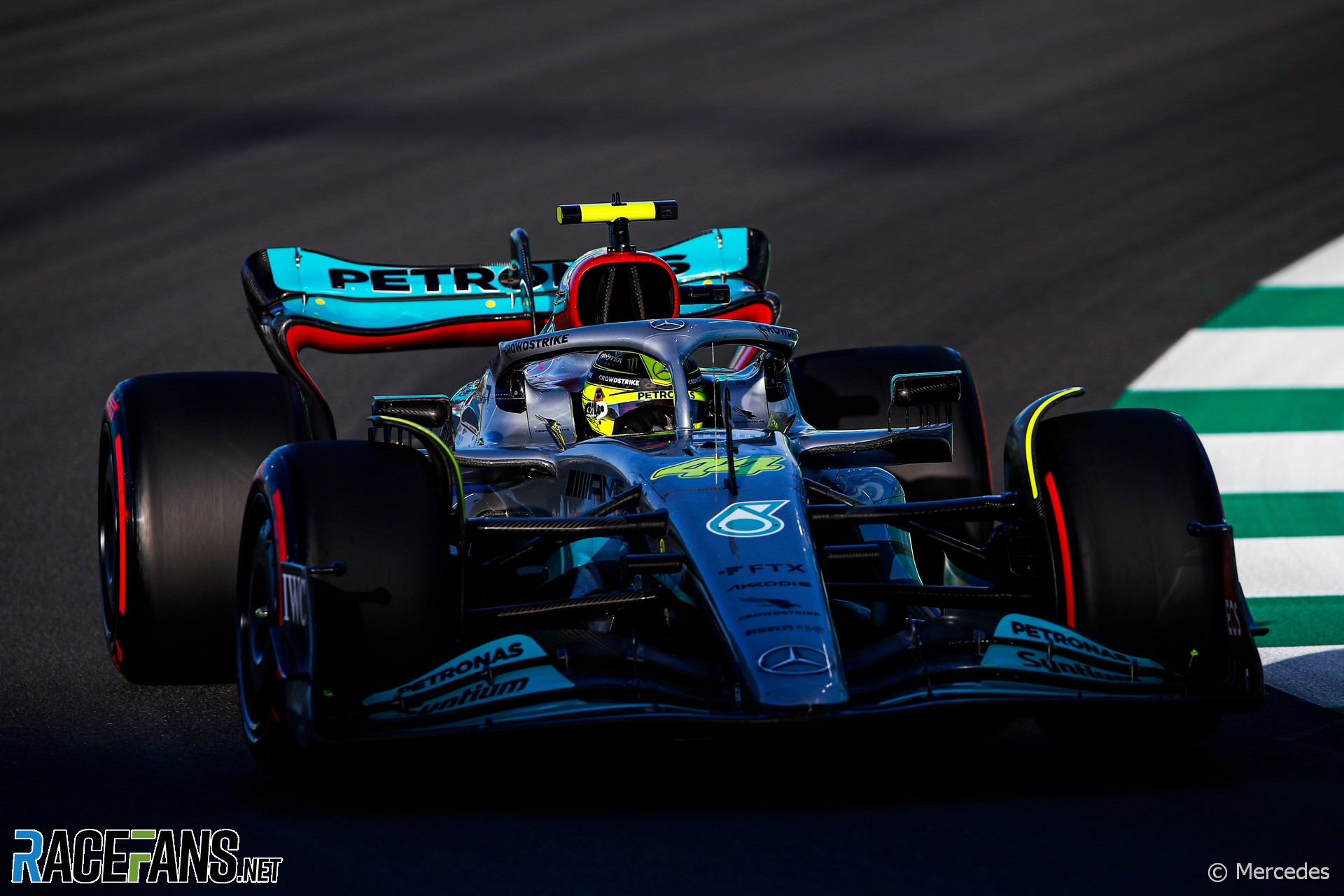 Lewis Hamilton’s elimination in the first round of qualifying at Jeddah Corniche Circuit was undoubtedly the biggest surprise of the session.

Unreliability and the occasional crash aside, Hamilton has almost invariably sailed through the first round of qualifying for over a decade. But he came unstuck under the lights in Saudi Arabia after risking just a little too much in his attempt to wring performance from the W13, a car which was over two-thirds of a second off the pace in Bahrain a week ago.

“We’re still experimenting with set-ups to find out where the sweet spot of the car is,” Mercedes team principal Toto Wolff explained in response to a question from RaceFans. “On Lewis’s side they went a bit bolder and the outcome was that basically they had no rear end in the car. And that explains that big lap time deficit.”

Hamilton was six tenths of a second slower than his team mate on the same rubber when he dropped out at the end of Q1. “I had no rear end,” he admitted while the qualifying session continued without him.

“The car was feeling good in [final practice] and I made a couple of adjustments. But I had no rear end, the rear was so loose.”

That was obvious from his first run in Q1, which he started on mediums. He corrected a snap of oversteer in turn two and another in the quicker turn four. His first effort was a 1’32.708, far from the pace, almost two seconds away from what George Russell did in the other Mercedes.

But while Russell was on the same rubber as his team mate, their cars had been set-up differently, and he was visibly more comfortable in his W13.

“The car is really on a knife’s edge and getting it in the right window is so difficult,” Russell said. “Lewis and I went down different set-up of routes and clearly it didn’t work out. It’s pretty clear on the data.”

Any opportunity for Hamilton to explore the problem further on his mediums was swiftly ended when Nicholas Latifi crashed and the session was red-flagged. Part of his exchange with race engineer Peter Bonnington conveying his surprise at the deficit to Russell in the first sector was played on the world television feed:

With 11 minutes left to run when the session restarted, and the possibility another interruption could occur, Mercedes took the safe decision to send both cars out on soft tyres with enough fuel to run until the end.

Hamilton had three cracks at bettering his time, but it wasn’t enough.

Ahead of his final run, Bonnington’s feedback to Hamilton was much the same as it had been after his first, that he was trying to take too much speed into the corners.

Wolff said the team had reduced their rear wing angles in an effort to improve straight-line performance on Jeddah’s long straights. Their deficit had been painfully apparently after final practice, where seven of the Mercedes-powered cars clustered at the bottom of the lap times, Hamilton 11th.

The W13’s sensitivity to set-up changes, which Russell alluded to, meant the slight different in wing levels had a significant effect, as Wolff explained.

“You can see between Lewis and George’s performances, that was not huge set-up changes that happened, but they were big enough to have dramatic consequences on the performance of the car between going out in Q1 and making it solid into Q3,” he said.

“This car is so tricky to set up. We had a lower drag rear wing, we took the Gurney off, but still it wasn’t enough to shave more drag off the car.”

As he embarked on his final effort, Hamilton was aware of the seriousness of the situation as he battled his car at turn-in all around the 27-corner track.

Hamilton’s final lap was largely clean. He made a slight correction in turn two, and had minor mid-corner and exit twitches through the long left-hander of turn 13.

That cut almost a quarter of a second off his lap time. But the resulting 1’30.343 only put him 15th, and was immediately beaten by Lance Stroll in the similarly-powered Aston Martin, and Hamilton was condemned to his early exit: