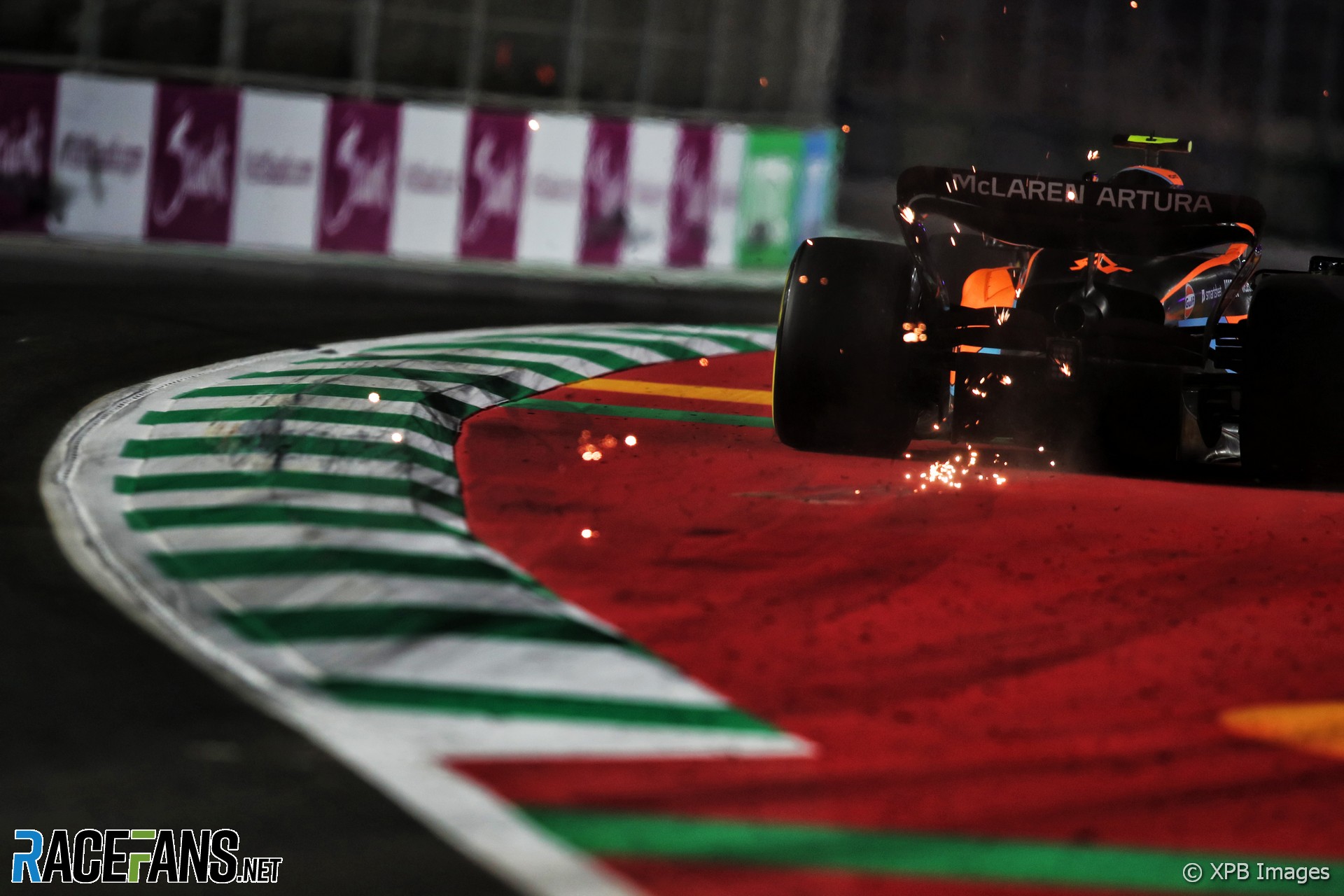 Lando Norris has called for immediate changes to the kerb Mick Schumacher hit when he crashed heavily in qualifying, which had already caused another major accident the day before.

Schumacher has been ruled out of participating in the rest of the weekend after striking a barrier at the exit of turn 10. He lost control of his car on the kerb at the exit of the corner.

Norris says the changes to Formula 1 cars for this year has made the kerb more hazardous. “I think with this era of cars, with how you have to run them and how they’re designed, some kerbs throughout the year might need to change, and I think this kerb is one of them,” he said in response to a questions from RaceFans.

F2 driver Cem Bolukbasi hit the same kerb during practice on Friday and crashed, suffering a concussion, which means he will also take no further part in the event. Norris said this was another example of the problem with the kerb.

“It was very evident from Formula 2 because in Formula 2 you have to run the cars very low as well. And there was two crashes and Cem, the Turkish guy, was in hospital.

“I think just with these type of cars you can’t have such an aggressive kerb at such a speed that we’re running at. I think what makes it worse is how it’s angled to come back and then curves around and you just get a little bit wrong and it can be a big incident like we saw.

“It needs to be edited for tomorrow and changed a bit because especially in a race situation, if you’re following or you just get a bit of understeer because of the dirty air and so on, through no fault of your own, you can just get caught out and with the car and how it is and the kerb, it can easily end up in a bad place. So I think they need to change it for tomorrow.”

The corner is tackled at over 240kph (150mph) and has a solid barrier on the inside. Norris suspects more yielding barrier designs, such as the widely used TecPro construction, wouldn’t be suitable at that point on the track.

“I don’t think you can really put a TecPro on the inside of the wall there because then the wall comes back out,” he said. “Just the shape of everything there is very odd. So if you had a TecPro there, if you hit it, it could easily just come onto the track, which is the issue.”

“I think apart from the kerb itself, everything’s probably as good as it can get, unless it’s just much wider, but then that defeats the object of of the circuit itself,” he added.

His McLaren team mate Daniel Ricciardo agreed the kerb is too punishing. “With the cars so much lower now that style of kerb is just very unforgiving,” he said.

“Of course I’ll always go back to ‘it should be difficult’ and ‘we don’t want everything to be easy’. But that’s a bit too far where you drop a wheel and because the car just kind of skateboards.

“The way that the wall is, we saw with Mick it was a very, very heavy impact. For sure, you can get penalised in other ways. I don’t know what the data [shows] but the G [force] impacts must be a very big number from his accident.

“I think more importantly for now I’m obviously glad that what we heard is he’s more or less okay. It’s a pretty big one, so good to see he got out.”

36 comments on ““Aggressive” kerb Schumacher hit should be changed before race, says Norris”