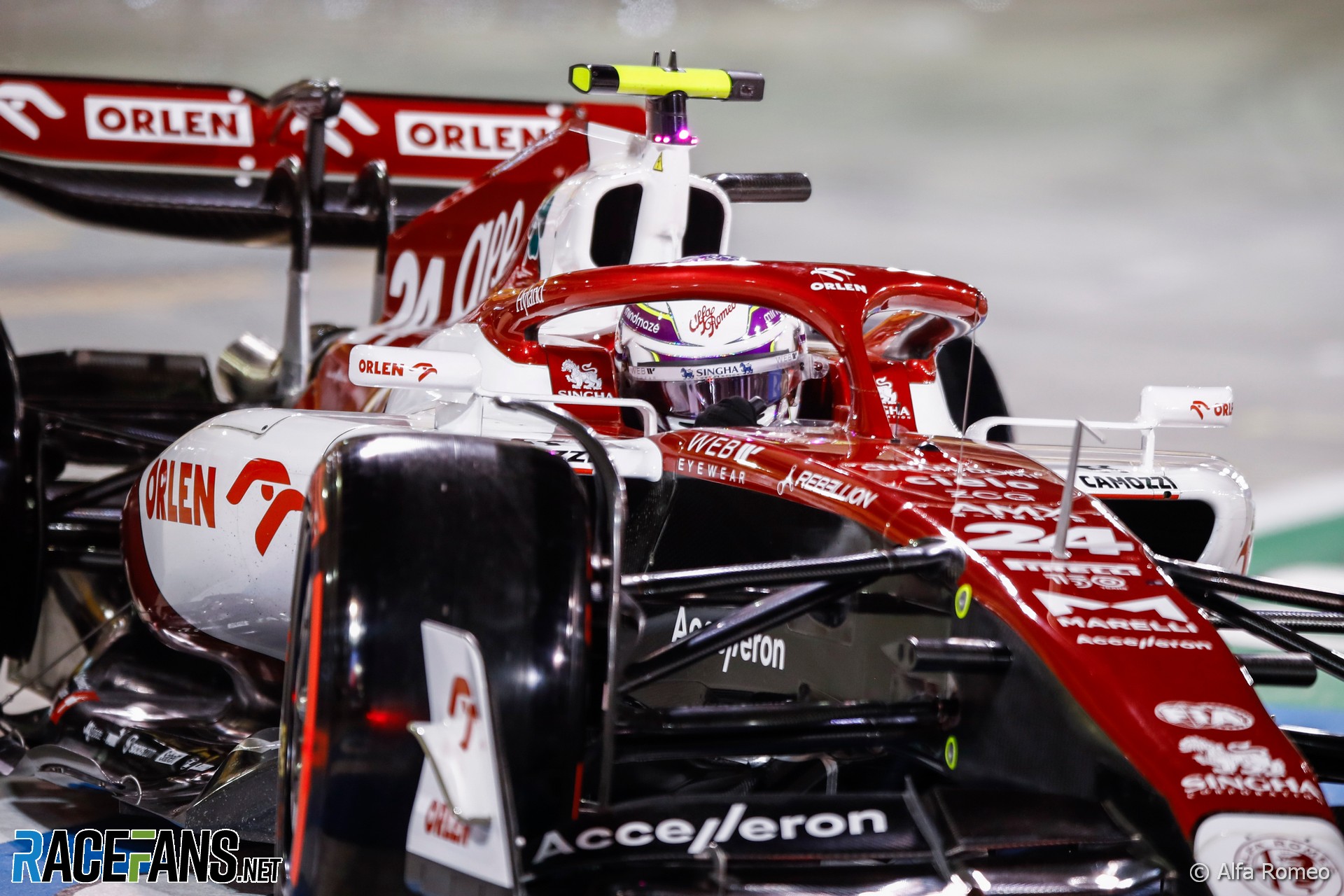 In the round-up: Zhou Guanyu admits to feeling nervous ahead of his first qualifying session as a Formula 1 driver

Zhou relieved to overcome ‘nerves and pressure’ on qualifying debut

The only rookie on the 2022 grid, Zhou Guanyu, admitted he felt “nervous and pressured” before his first qualifying session yesterday.

“That was the first two things that came in my mind before I jumped in the car,” he said in response to a question from RaceFans yesterday. “Even though I was so relaxed for this weekend, once that qualifying comes, I just really feel that tension.”

However he was thrilled to progress beyond Q1 at his first attempt, and see team mate Valtteri Bottas take the other Alfa Romeo into Q3.

“But I was happy with Q1, a huge relief,” he said. “And then in qualifying two it was about trying to get a bit more out of myself. I think we didn’t manage that perfectly. But nevertheless, I was so happy with the performance so far. I’m very proud with the team with both cars today [doing] good.”

Oliver Bearman crossed the chequered flag in the lead of Formula 3’s sprint race in Bahrain but was immediately penalised for repeatedly exceeding track limits, and lost victory to Isack Hadjar.

However, Bearman said afterwards that he had been unaware of any track limits violations until the penultimate lap. “I knew I did it once, for sure, on the penultimate lap, I definitely went wide but apart from that, I was pretty sure I was either on the white line or leaving some margin,” Bearman explained. “So I didn’t actually know about the penalty until after the race finished, which is quite bittersweet.”

Hadjar said he had also been unaware of Bearman going over track limits. “I got a radio message from my engineer to say you won the race and I didn’t know why,” he said. “He just told me he has a five second time penalty.”

Richard Verschoor won Formula 2’s first sprint race of the year, returning to the series after his 2021 campaign with MP Motorsport was cut short due to lack of funding.

Verschoor said he had secured his return himself, including speaking to 17 sponsors, as he has no management. “It’s been tough,” said Verschoor, who took the last place on the F2 grid. “I don’t really have a manager or a management. So basically all the partners that I have, I talk to them myself, I even made the sponsor contacts myself.

“There’s been a lot of effort going into that to make sure that I even can have a drive and follow my dreams. But in the end, I have a lot of partners that support me in this in this phase. So that’s why I’m even more proud to get the win today.”

No replacement for Sochi Formula 2 round

The World Motor Sport Council has approved an updated Formula 2 calendar for 2022 with 13 rounds, confirming that there will be no replacement to the two races planned to be held at the Russian Grand Prix.

The absence of a race at Sochi leaves F2 with a more than two-month gap in its season between the penultimate round at Monza from 9-11th September, until the final round at Yas Marina on 18-20th November.

Thanks mate! Definitely felt very nervous for my 1st quali 😅

OK… I know that this 2017 #HungarianGP encounter is an infamous cliché, but I’ve worked with both of them, they’re both great guys, they’ve both been out of #F1 for a while, & in their different ways they both totally nailed #BahrainGP quali today. 💪👏pic.twitter.com/NQuR36Z6IN

The @fia confirms what was obvious, that their race director failed to follow their rules.

As a result the world championship changed hands.

There will now be a chorus of "time to move on". No one will want to admit how badly this reflects on #F1.https://t.co/F9USeI2Jg7

F1 CEO Stefano Domenicali says that F1 will approach drivers who refuse to participate in the Netflix documentary series Drive to Survive: "If a driver refuses to participate, because he is not presented as he wants, we talk about it constructively."

"The Government is looking forward to contribution from the private sector to help bring back the Formula One (F1) Grand Prix (GP) to Malaysia, says Youth and Sports Minister Datuk Seri Ahmad Faizal Azumu."

‘Get in and do it’: Daniel Ricciardo’s horror start to 2022 is no excuse (Fox Sports AU)

Alan Jones: "At the end of the day, it doesn’t matter what you pop your bum in, if you are a proper racing driver, you adapt to what you get. I don’t subscribe to ‘It doesn’t suit me’ and all this sort of crap because you are a racing driver. You just adapt and get in and do it."

"On Sunday, as the cars line up for the grand prix, there will be no Uralkali logo racing around the track, and Kevin Magnussen will have replaced Nikita Mazepin as the second driver for the Haas F1 team. Uralkali’s and the Mazepins’ absence portends a far bigger story than a reaction to current events at the highest levels of motorsport."

"The American driver caught up with us to talk about his transition to Formula E and how he didn't grow up with a motorsport background."

A new F1 season means a swanky new graphics package for television coverage. But after the first qualifying of the season, @cdavman’s spotted some room for improvement..

The old graphics used to update the sector colours throughout the lap as subsequent drivers produced purple sectors.

The new graphics don’t do that, so it now misleadingly shows several drivers at once with purple in the same sector. Makes it very difficult at a glance to see how a lap is unfolding for someone.
@cdavman

Get the best of our motorsport coverage after every F1 race in your inbox – sign up for the free RaceFans email Newsletter: