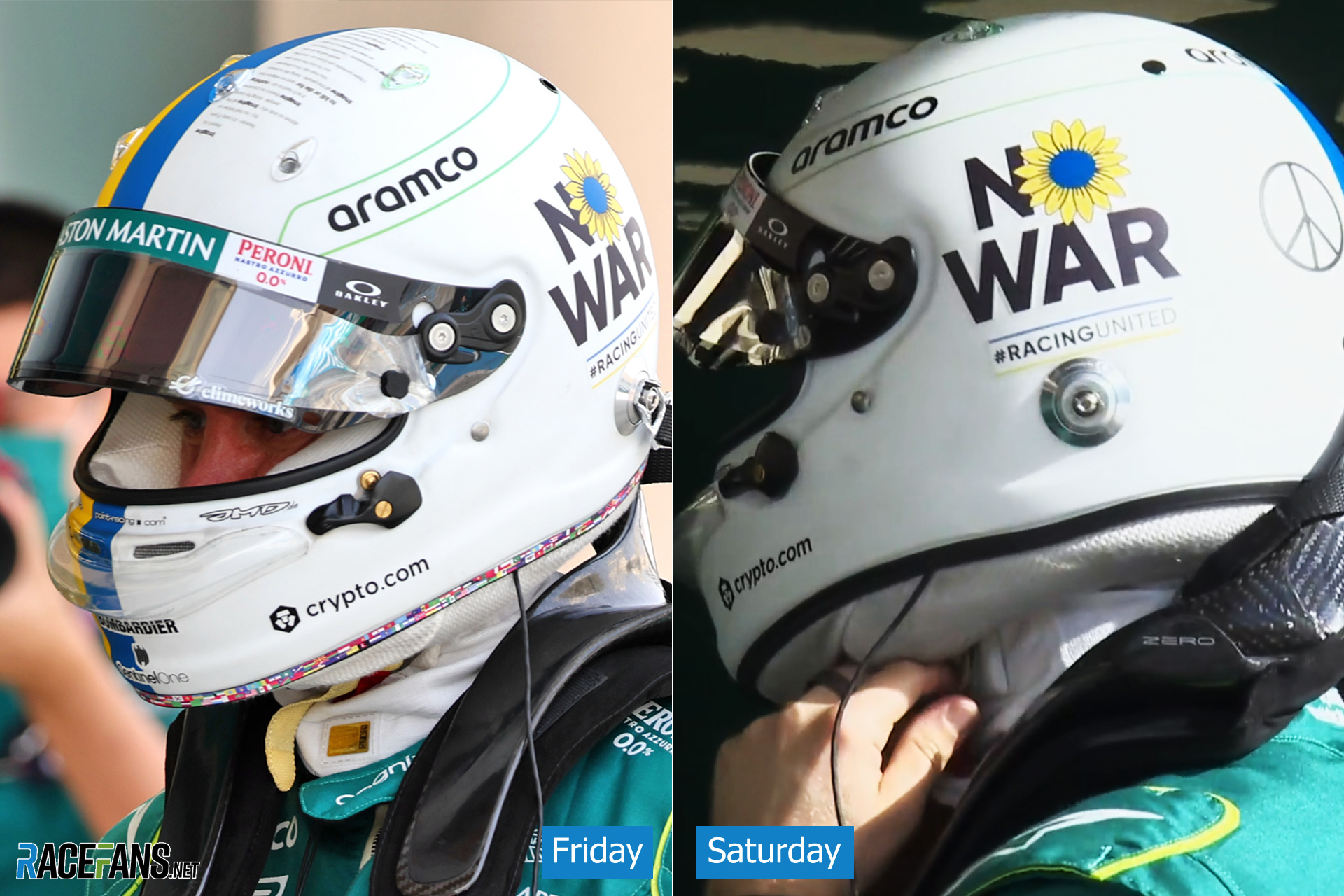 Sebastian Vettel says he did not deliberately intend to feature the flag of a disputed region of northern Cyprus on his anti-war helmet design.

The Aston Martin driver introduced a special helmet design for the three day pre-season test in Bahrain, expressing support for the nation of Ukraine following its invasion by the Russian military.

Vettel replaced the colours of the flag of his native Germany on his helmet with those of the Ukrainian flag and added the words “no war”. The design also featured a ring of national flags from across the world on the base of the design.

However the Cyprus Automobile Association (Cyprus AA) objected to Vettel’s inclusion of a flag of the unrecognised Turkish Republic of Northern Cyprus. On Friday evening RaceFans was advised the flag image had been removed and on Saturday Vettel appeared in a revised helmet without any of the flags around the base (above).

In a statement posted on social media, the Cyprus AA said they were pleased that the disputed flag had been removed from Vettel’s helmet design and said their president had been advised by FIA president Mohammed Ben Sulayem that he had ensured the flag did not reappear.

Asked by RaceFans about the controversy over the flag, Vettel said that he had not deliberately included the flag as part of the montage.

“Around the bottom there’s just the opportunity as a small sign to have all the flags of the world,” Vettel explained.

“I didn’t control it, I didn’t check all the flags, but apparently there was some issues, some minor ones. I took the little sticker off because some people got upset, which I think fails the message – the message is that obviously the whole world should be united and is united, I think, to fight war. I think we grew up in times of peace and I think we appreciate peace a lot.”

Vettel described the war in Ukraine as “like a nightmare” and said his fellow drivers were unanimous in their condemnation of the invasion.

“Obviously, I wish I would have not come up with the design because there was no need,” he said. “It’s a strong sign to just show support. All the drivers clubbed together as well on Wednesday and we thought we would use the opportunity to just show that we are united and take a stand.

Vettel’s helmet designer Jens Munser Design issued an apology in response to messages it received on the subject. “We are sorry if some flags are missing or some shouldn’t be there or whatever is wrong in various different opinions,” it said.

“The only message of these more than 250 flags is to underline a worldwide united stand against war and to stay together as one. For this JMD used a stock graphic bought from a stock platform and we apologise for not checking every single flag and their political history thoroughly.”