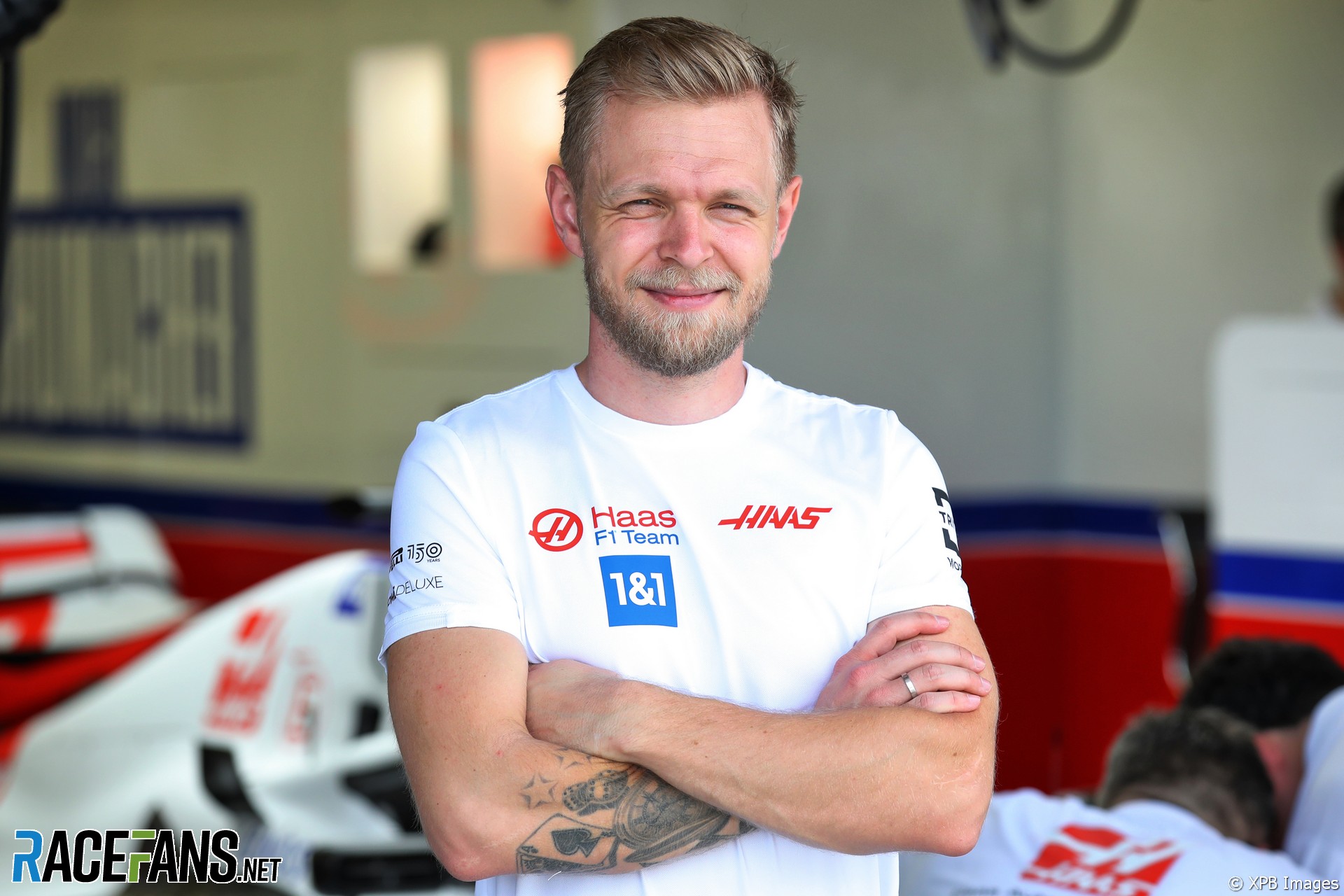 When Kevin Magnussen climbed out of his VF-20 at the end of the 2020 Abu Dhabi Grand Prix, he did so in the expectation he had driven a Formula 1 car for the final time.

Following 17 frustrating, fruitless races that year which had bore just a single, measly point, the man renowned for speaking his mind perhaps more willingly than any of his peers offered a typically frank assessment of the closing chapter of his own Formula 1 story.

“I’m a racing driver that likes to win,” he had said, facing the media in the Yas Marina paddock for what he assumed would be the last time.

“I know every racing driver wants to win but I really, really want to win and we haven’t been even remotely close to being in any sort of situation to win races in the last two years and even four years.”

As he prepared to begin his life after F1, Magnussen said he was “not really sad because I’m really looking forward to getting back in a winning situation where I can go to race weekends and just think about and be focussed on that win and think about the championship all year. So I’m not going to miss that in Formula 1.”

It was a situation he knew only too well. After a rookie season at McLaren in 2014 which began with the unrealistic promise of second place on his debut, Magnussen was unceremoniously dropped by the team to make way for Fernando Alonso for 2015. It left him out of action and out of sorts.

But he had plenty of options to continue racing in 2021. And after a year spent competing – and winning – in prototype Cadillacs for the great Chip Ganassi, and French manufacturer Peugeot signing him up to help spearhead their latest Le Mans bid, the 29-year-old had made peace with having to put his Formula 1 aspirations firmly behind him.

With a newborn baby and a newfound appreciation for the joys of good, hard sports car racing, Magnussen settled back into life in his native Denmark where he could just enjoy being a racing driver once again.

But then, his phone started ringing. On the screen, a familiar name: Haas team principal Guenther Steiner, who was preparing to drop Nikita Mazepin from the squad as they severed their ties with Russian sponsor Uralkali.

“I was in a happy place when Guenther called me,” Magnussen explained. “2021 was really enjoyable for me. I had a daughter and I moved back to Denmark for the first time in many years and I did a season in IMSA, which I enjoyed a lot too. Had fun, did an IndyCar race, did Le Mans with my dad – I was just really enjoying myself a lot.

“So I wasn’t really thinking about Formula 1 a lot. I kind of truly accepted that Formula 1 was a closed chapter. But then, of course, I saw that Mazepin was out of Haas. I didn’t think I had a chance to go in there, because I still don’t bring a lot other than just my driving skills to a team. So I thought that was still not going to be a possibility and then Guenther called me and that was a big surprise.”

Having claimed he would not be interested in returning to Formula 1 if it meant he would be left scrapping at the back, Magnussen says that feeling melted away the instant he realised that opportunity had come calling for him.

“When he called me I said ‘yes’ immediately,” he said. “And then these obstacles became quite clear that I’ve got contracts with other teams and also all these thoughts about ‘do I need this?’. But I just felt like that first initial feeling that I had when Guenther called was so telling.

“I just felt so excited about this possibility to actually just go back again and make another comeback. This is my second comeback and it’s fantastic. Anyone that gets the chance to race in Formula 1 is extremely lucky and if you get that opportunity, I think you should always grab it and seize the moment.”

Despite having once declared he’d put his F1 dreams behind him, Magnussen now characterises those magnanimous words as a front to help him cope with the reality of accepting his Formula 1 career was over.

“It’s also a way of coping. There’s no reason to look back and say, ‘oh, I want to go back’. I got asked quite a lot, ‘would you like to go back?’ – I got tired of all those questions. It’s easier to deal with if you say ‘no, I’m looking forward and I’ve moved on’. But then, when you get that opportunity, you take it.”

And when Steiner offered him the drive, he did not make any bold claims about how competitive Magnussen could expect their new VF-22 to be – a car they have spent over a year committed solely to developing.

“He didn’t promise anything,” Magnussen said. “He said that they’ve been working really hard on it and have given me some indications. Just walking around and speaking to everyone in the team, I feel like there’s some sort of vibe going on. Let’s see. I don’t think we’re going for the championship this year, but I think I think there’s a good atmosphere. You can feel something good is coming.”

Walking into the Bahrain paddock, Magnussen was immediately greeted with a heartfelt warm welcome from Haas team members, rival drivers and journalists alike. In a sport as exclusive and sometimes cruel as Formula 1 can be, many in the paddock are genuinely pleased to see him being granted a second chance – or even a third.

“I feel the same. Walking into the paddock yesterday, I felt like I never left,” Magnussen said.

“It’s funny when I think about the year that I’ve had, how much has happened – I had a kid, I moved back to Denmark. A lot of things happened, it feels like ten years have passed if I’m looking outside of the paddock. But then I walk in and it feels like I never left. It’s funny how time can mess with you.”

One of the new faces in the garage is his new team mate – Mick Schumacher. Magnussen says that despite the gulf of experience between the pair – he’s done almost 100 more races than Schumacher – he’s under no obligation to help nurture his younger team mate’s talent.

“I haven’t been asked to play any sort of mentoring role at all. I know what I’m here to do and that is go score some points and do good races to help the team develop this car and help the team move forward.

“Formula 1 is different to other forms of motorsport – sports cars, especially – where you really are working as a team with your team mates. In Formula 1, you are racing against each other. So I think it’s important to understand that you can benefit from each other, but also important to accept that you are, at the end of the day, racing for the same points.”

While they may not know each other too well, there is one unique aspect the Haas pair share in common – a famous surname.

“He grew up with motorsport in his blood,” Magnussen explained. “I know what that means. I think he should be a very strong driver and I’m looking forward to learning from him and working with him.”

With a multi-year contract to his name, Magnussen knows he is fully committed to the most intense, pressurised environment in motorsport for at least the next two years. But at this point, it’s a challenge Magnussen says he is relishing.

“Formula 1 is a sport where you always need to prove yourself,” he said. “Every lap, every second you have in the car, you’re proving yourself.

“That’s what’s so cool about this sport, is that it’s such high pressure. There’s no time to relax. You’ve always got to be the best version of yourself. You can never be perfect and you’re always striving for better. It is the most competitive form of motorsport and I’m just excited.”

7 comments on “‘I was in a happy place when Guenther called’: Why Magnussen couldn’t resist F1 return”