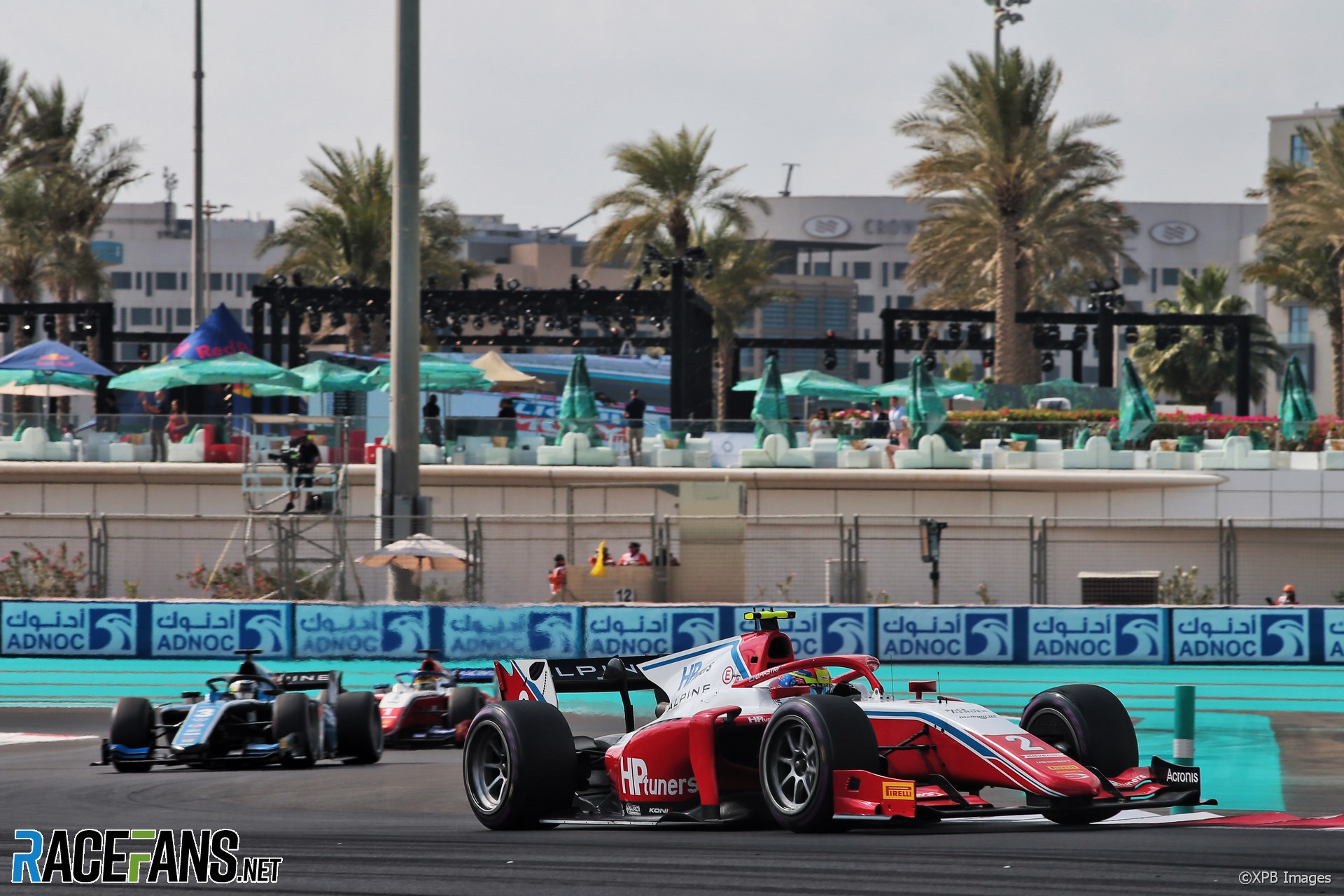 Oscar Piastri rounded out his title-winning Formula 2 season with victory in the Abu Dhabi feature race ahead of fellow Alpine junior Guanyu Zhou.

There was drama for Piastri before the start as he required a front wing change after being hit by Guilherme Samaia in the pit lane on the way to the grid. He had it far easier once the race began, leaping out into the lead from pole while Zhou fought with Jack Doohan for second place.

MP’s Red Bull junior Doohan deflected several attacks from Zhou until they reached the new turn nine left-hander, where the positions did change but Doohan then ran off at the exit. He rejoined the track at the entry of turn ten, but as he was on the medium compound tyre – while those around him were on supersofts – and he had picked up dirt by going off circuit, he then found he had no grip as he attempted to make the next corner.

His car hurtled out of control and into the barriers, while Hitech’s Liam Lawson had a similar excursion behind and also spun around but managed to return to the track. The safety car was summoned as Doohan’s car had ended up resting in the barriers, leaving a top three of Piastri, Zhou and Robert Shwartzman.

The safety car period enabled those who started on the supersofts to keep their tyres on for longer, but once those drivers all pitted within the first 10 laps it left ART’s Theo Pourchaire leading Virtuosi’s Felipe Drugovich at the front of the field on their medium tyres.

The split-strategy meant their battle for the lead was with Piastri, who was outside of the points places once he pitted, and they managed to maintain a gap of 24 seconds to the Prema driver until they pitted with just a few laps to go of the 33-lap race.

A slow pit stop for Pourchaire and then a diving pass by Drugovich, who stayed out one lap longer, meant those two didn’t make the most of their tyre life advantage once they returned to track nine seconds behind Piastri.

They were able to track down and pass Shwartzman for third place, but a brief Virtual Safety Car period after Lawson stopped off-track gave less time for the late stoppers to make further progress.

Third place for Drugovich, behind Virtuosi team mate Zhou, meant their team secured the runner-up spot in the teams’ standings while Shwartzman was confirmed as second place in the championship ahead of Zhou.

Carlin’s Dan Ticktum pipped DAMS’ Marcus Armstrong to sixth in the race, while Hitech’s Juri Vips served a five-second penalty during his pit stop for a collision with ART’s Christian Lundgaard early on but still managed to finish just a few seconds behind Armstrong in eighth.

Ralph Boschung initially was in contention for a third podium from the last two rounds of the season, but he lost positions while running the supersoft tyre in his first stint and ended up down in 10th place until Carlin’s Jehan Daruvala was penalised ahead for speeding in the pit lane, allowing Boschung to move up a spot ahead of him.