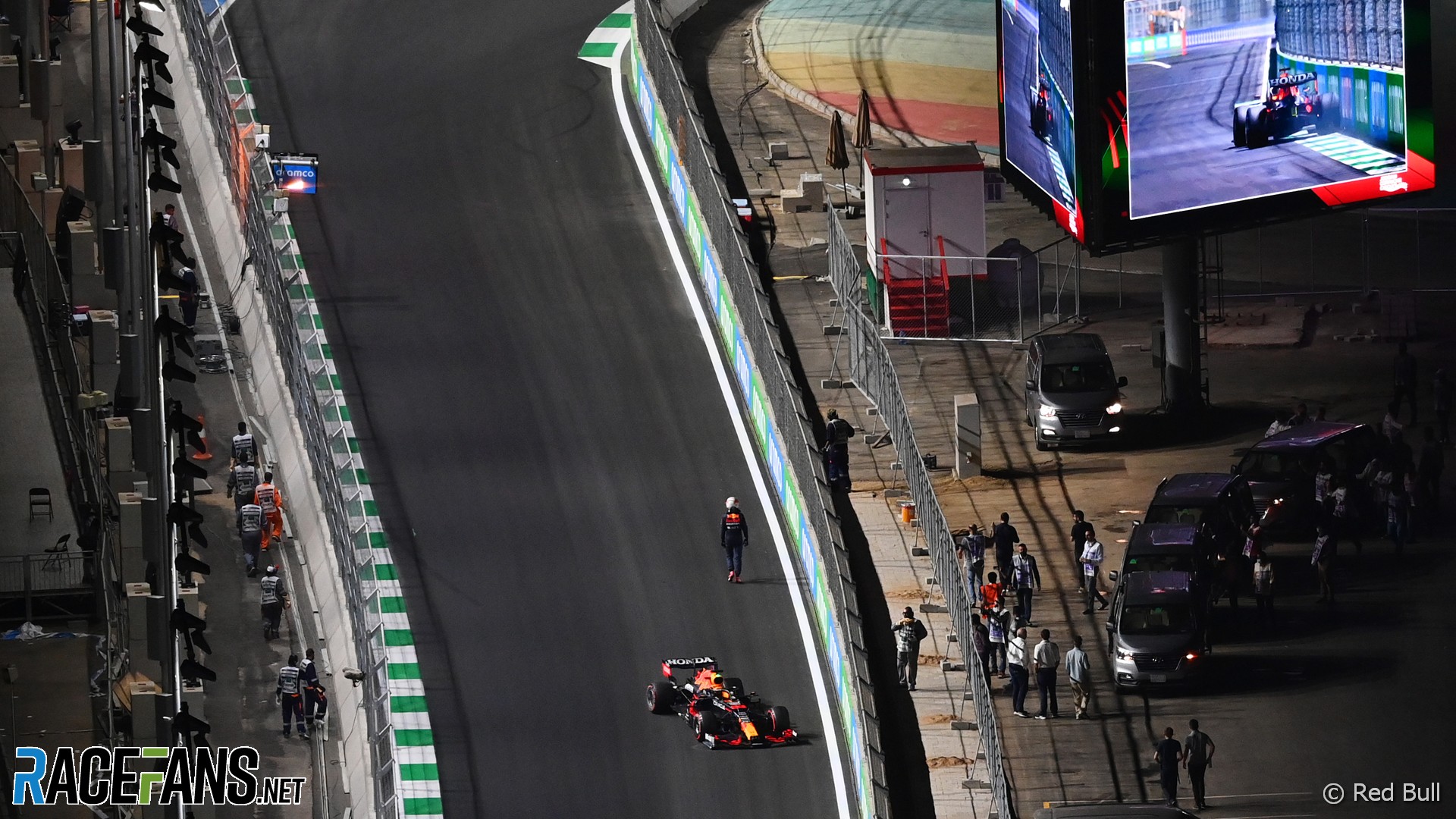 Max Verstappen came within one corner of clinching pole position for the Saudi Arabian Grand Prix, before clipping a barrier at the final turn.

Until that moment the championship leader was in supreme form throughout qualifying, immediately able to find pace which eluded his team mate and Mercedes rivals.

But as the radio communications from the session showed, Red Bull’s approach to the session didn’t always align perfectly with what their driver wanted. While Verstappen agitated for his team to arrange a slipstream for him, race engineer Gianpiero Lambiase urged their driver to focus on the game plan.

They came within one corner of pulling it off.

Like many drivers, Verstappen was preoccupied by traffic during Q1. With all 20 cars attempting to set a time, and knowing Red Bull had no fear of elimination, most of his back-and-forth with Lambiase was inevitably focussed on avoiding other cars.

The threat posed by championship rival Lewis Hamilton was naturally a matter of interest to the team. He was late to set a competitive lap in the session, waiting over seven minutes before he put a time on the board.

By that point, Verstappen had gone to the top of the times and was watching to know whether the rapidly improving track conditions would mean he needed to go again to guarantee getting through.

Verstappen was instructed by Lambiase to keep going with a double cool-down lap strategy in the mid-part of the session, before getting insight into where he was losing time to Valtteri Bottas after the Mercedes overtook him in the timings. The first sector, in particular turn one, was a key concern for the team during the session.

Verstappen’s qualifying would eventually end with a wall tap at turn 27 in Q3 but he nearly ran into trouble at the same corner towards the end of Q1 when he encountered a large queue of cars. Drivers had been instructed not to slow between turns 23 and 25, but several backed off after there, including Bottas whose engine had developed a misfire. As a result Verstappen almost literally ran into traffic.

After running double cool-down laps on the soft compound in Q1, Verstappen was told early in Q2 that he needed to “really focus on cooling the tyres”” on the medium compound. Otherwise, Lambiase was unwilling to give much away on the radio, avoiding answering questions from Verstappen while out on track.

Verstappen’s initial effort in Q2 was the first lap of the weekend below a 1’28. Per routine, Lambiase reminded him he was likely on the set of tyres he will start the race with. That proved correct, Verstappen’s time was easily good enough to put him in Q3.

After final practice Hamilton was investigated for failing to slow for yellow flags. He was judged not to be at fault as the accidental signal had been shown for less than a second.

Red Bull, who had been given a grid penalty in Qatar after Verstappen failed to slow for a double waved yellow flag, were clearly taking no chances of a repeat.

In the final part of qualifying, Verstappen’s focus was able to shift to outright pace and taking pole, rather than being preoccupied with avoiding traffic. With only 10 cars left on track, gaps became much easier to find. Verstappen worked on his problem with turn one, flagged in the first part of qualifying, where he was losing time to the Mercedes drivers.

In the last third of the session, Verstappen boxed for fresh tyres after a discussion with Lambiase over Perez giving him a tow, which his engineer declined to entertain.

The final adjustment, before his last out and flying lap, was talked through before Verstappen arrived at the Red Bull pit.

But Verstappen was convinced he needed external help to boost his straight-line speed. The message, while Red Bull mechanics were making adjustments to and cooling his car, went unacknowledged.

Verstappen didn’t have a tow for his final lap, but was exceptionally quick all the same. He set a personal best through the opening sector, and reeled off purple middle sectors in the mid-part of the lap.

He was on course to beat Hamilton’s time by three-tenths of a second as he approached the final corner. A tidy run through the turn 27 was all he needed.

“I thought, last corner, there might be still a bit to gain,” Verstappen explained. “I knew, of course, Lewis was a tenth, tenth-and-a-half ahead but I approached it like I always do in qualifying.

“But somehow I just locked up. I have to see if I actually braked later or not. For my feeling, I didn’t.”

“It’s just really disappointing because it was a really good lap up until then,” he admitted. I was really enjoying it.” Until the 27th turn it looked like being a lap for the history books.

12 comments on “‘It’s not all won at turn one’: Verstappen’s unrewarded qualifying heroics examined”