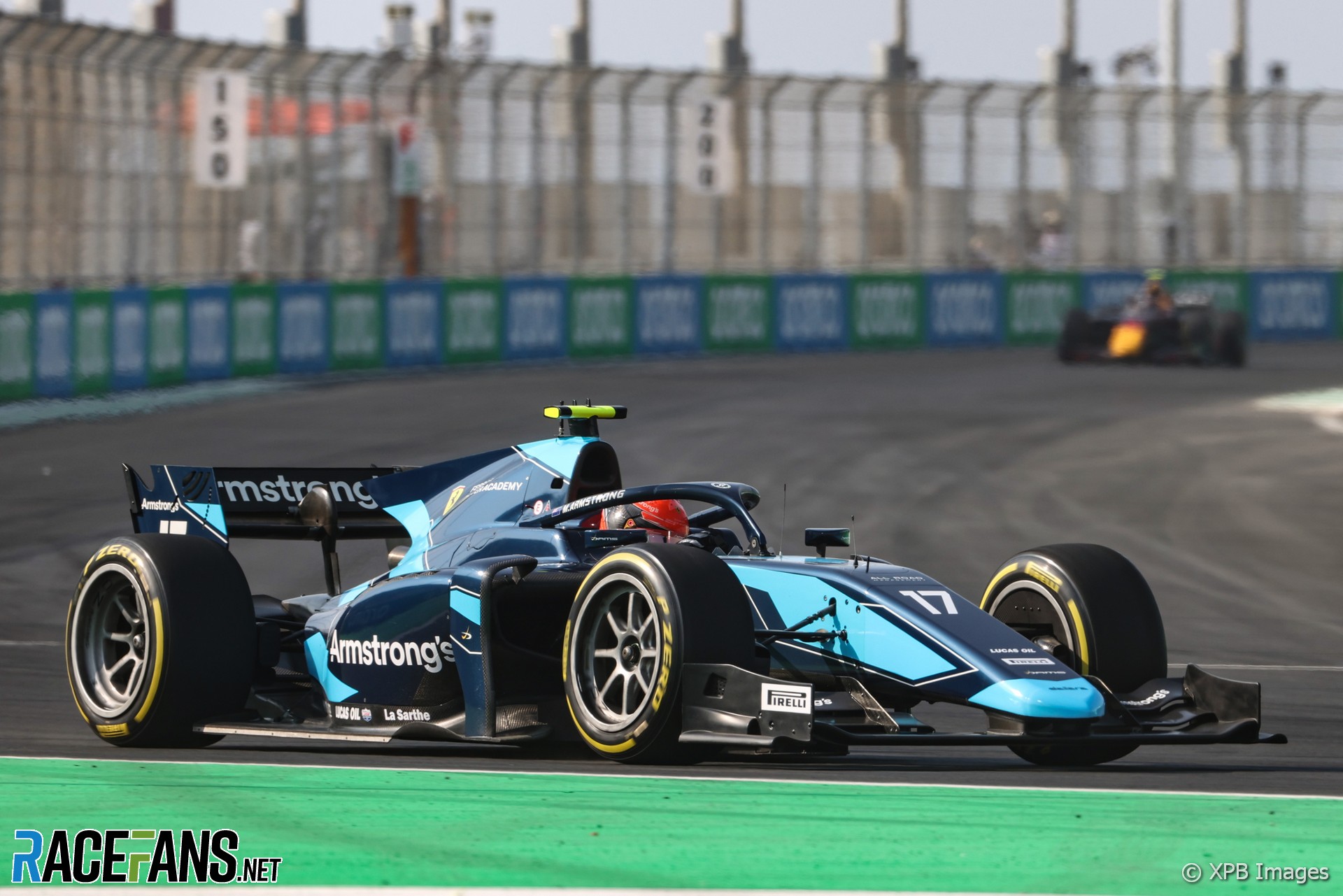 Ferrari junior Marcus Armstrong claimed his first Formula 2 win in the inaugural race to be held on the Jeddah Corniche Circuit.

The DAMS driver managed to get down the inside of Liam Lawson, who had started from pole, going into turn one at the start, but the move wasn’t completed as Lawson then cut across the run-off to turn two. The lead finally changed hands as they braked for turn four and had to go single-file, and from there the win was Armstrong’s as Hitech driver Lawson did not have the pace to stay within DRS range of the leader.

The race was put behind the safety car moments after Armstrong’s move for the lead as Campos’s debutant Olli Caldwell nerfed the rear of Charouz’s Guilherme Samaia at the same corner, slamming Samaia into the inside wall, which then ricocheted into Trident’s Marino Sato.

Racing restarted on lap four but again there the field managed only a few corners before the race was interrupted again, this time with a virtual safety car period after an ambitious move by Virtuosi’s Guanyu Zhou on ART’s Christian Lundgaard at turn two led to title contender Zhou spinning and breaking his front wing on Lundgaard as he rode over the kerbs. He was able to pit for a new front wing, as Caldwell had too, and rejoin at the back but resumed over 13 seconds behind anyone else.

Title leader Oscar Piastri did not make progress from his 10th place starting position on the reversed grid until the second half of the race, when Campos’s Ralph Boschung started to lose pace from third place and once he was in DRS range was sucked into battle with most of the cars behind.

Hitech’s Juri Vips passed him first to take third place, then Virtuosi’s Felipe Drugovich robbed him of fourth. There was still a gap back to Robert Shwartzman in sixth, but he was leading a train of cars and so once the Prema driver caught up with Boschung he brought five more cars past him to leave the Swiss sitting down in 12th.

The race was neutralised again as ART’s Pourchaire crashed at the high-speed turn 22. Pourchaire had been running in seventh, with a lunging turn four pass by Shwartzman putting him behind the Prema driver and his own team mate Lundgaard but earning Shwartzman a five-second penalty for gaining the position off-track, with Pourchaire’s retirement required a VSC and then a full safety car.

Through the first half of the race, Dan Ticktum had battled hard with Bent Viscaal outside of the points-paying positions, but he eventually got free of the Trident driver long enough to hunt down the train of cars ahead and he swiftly passed Boschung just as Piastri passed his team mate Jehan Daruvala on lap 13 of 20 for what would become seventh after Pourchaire’s crash.

The final restart left three laps of racing to go, and Armstrong had to fend off an immediate Lawson attack and then another at the final corner of the race to take the chequered flag and claim his first win in Formula 2.

Further back, Daruvala went down the inside of Piastri and Lundgaard for sixth at the final corner of the restart lap. Piastri almost responded at turn one but backed out, while Daruvala locked up but then pulled away by enough of a margin to take fifth from the penalised Shwartzman.

That left Piastri to fight with his fellow Alpine junior Lundgaard, but stern defence allowed Ticktum to get involved and he passed Piastri at the final corner before almost clearing Lundgaard too. Boschung, after his early running in the top three, finished 15th.