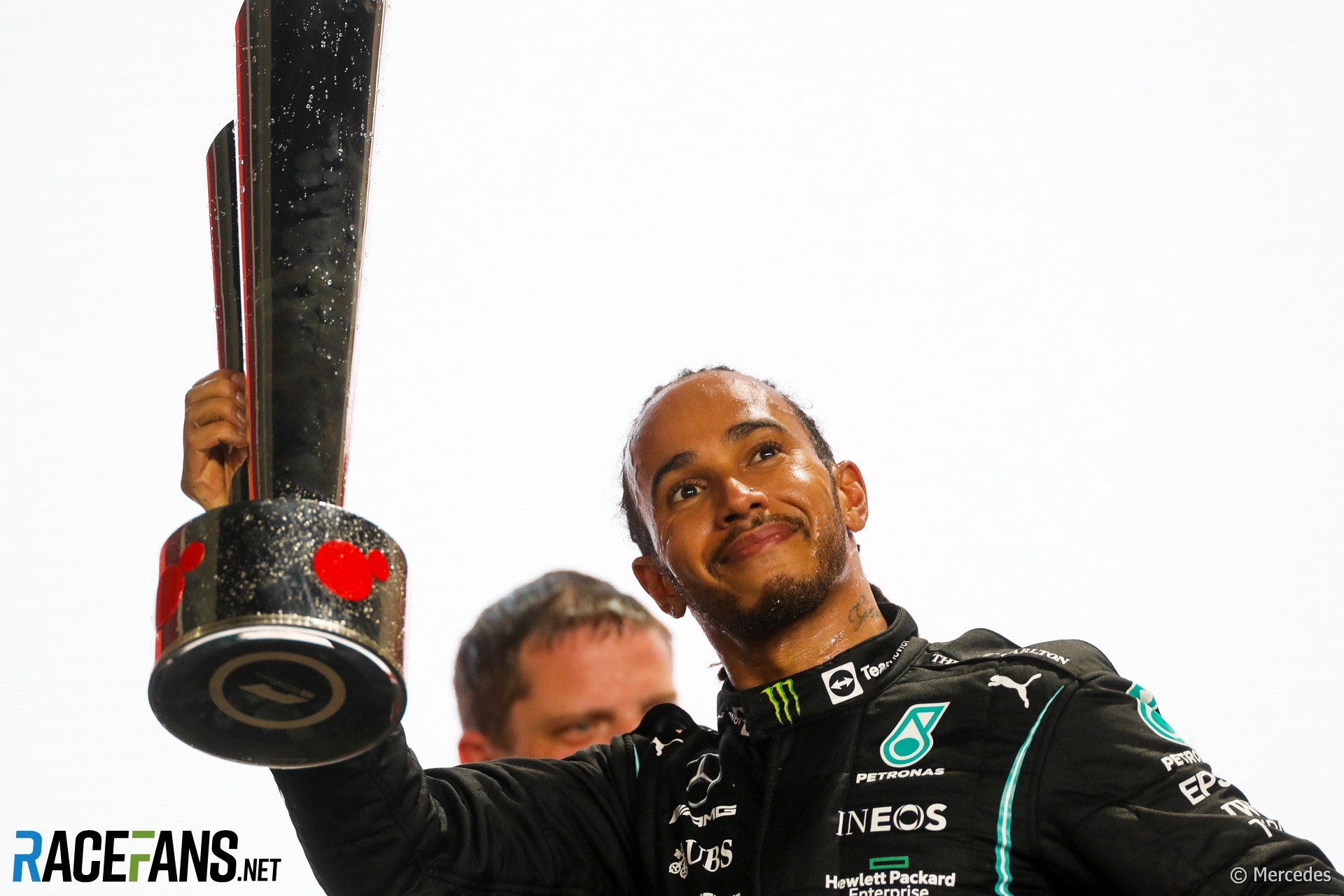 But the two shared one view in the build-up to F1’s first race at Losail International Circuit. Red Bull team principal Christian Horner remarked that of the three remaining venues, all of which are either largely or completely unfamiliar, the winding Qatar venue was the one which should suit Red Bull’s chassis best.

As the teams familiarised themselves with a layout designed for Moto GP bikes and tweaked for F1, it rapidly dawn on Red Bull that their rivals had their W12 dialled in superbly for the track. By final practice Red Bull were still fretting over their bizarrely oscillating rear wings, which were eventually dropped in favour of their tried-and-trusted high downforce configuration. Was this the plan all along, and the slimmer wings were being worked on in practice for deployment at the upcoming tracks where they fear Mercedes will be harder to catch?

Whatever, Red Bull fought as hard off the track as they did on it. They threatened protests over Mercedes’ rear wings, then backed down after the FIA introduced a new test, albeit one which does not yet carry regulatory force, meaning no one risks exclusion for failing to comply. Nonetheless, Red Bull insisted Mercedes’ straight line speeds had been trimmed.

For all that, there was little evidence of a diminution of Mercedes’ performance on-track. Hamilton lapped 0.455 seconds faster than Verstappen as he beat his rival to pole position. In Brazil, Red Bull had been 0.438s away.

The record books will show Verstappen was 0.597s slower than Hamilton. But that was because his fastest time in Q3 was deleted, in the latest in a series of controversies to rock the title fight. Verstappen, along with Valtteri Bottas and Carlos Sainz Jnr, were investigated for failing to slow sufficiently for yellow flags at the end of Q3.

The Red Bull driver had passed double-waved yellow flags and was given a five-place penalty; Bottas passed a single flag and was penalised three places. This was a bonus of sorts for Mercedes: Now Bottas would also start in front of Verstappen. Sainz, the only one of the three to realise after passing the flag that he needed to back off, avoided a penalty.

Horner was furious and made his feelings about the standard of stewarding clear in one of his television appearances for Sky, which have become so frequent he is in danger of being mistaken for the fourth member of their presenting team. Here he crossed a line, and was formally warned by the stewards after FIA F1 race director Michael Masi took exception to him criticising a marshal.

While Verstappen’s penalty was inarguable, it robbed the race of another showdown between the title rivals. Just a week after Verstappen’s controversial off-track defence of his lead in Brazil, the prospect of a banzai lunge down the inside of Hamilton at Losail’s wide first corner was widely predicted until his penalty was announced just an hour and a half before the race began.

Even so, Verstappen made such a remarkable getaway from the fourth row of the grid he almost arrived on his rival’s tail at turn one. The imperative to clear the Bottas, also starting on medium tyres, was achieved within seconds of the lights going out as the Mercedes driver struggled to find purchase from his off-line starting position. Verstappen briefly had a look at third but Fernando Alonso was in no mood to surrender than and edged the Red Bull wide while simultaneously teeing up Pierre Gasly for a fabulous pass around the outside of turn two.

Within four laps Verstappen was past the pair of them. AlphaTauri told Gasly to let the driver from their sister team by. Gasly ran wide at the final corner, which may not have been intentional, then left his DRS closed until Verstappen passed him on the pit straight. Alonso put up no more of a fight, Verstappen breezing past in the same DRS zone.

But his team’s hopes he would swiftly reduce the 3.7 second lead Hamilton had built over the opening laps were soon dashed. Verstappen had picked up slight front wing damage soon after the start, and Hamilton progressively edged clear.

“I think it happened lap one and lap three or something in turns 14 and 15,” Verstappen explained. “By trying to follow I just understeered a bit wide and this extra row of kerbs, they’re quite aggressive and I saw a few sparks flying, so I think it did damage the front wing a little bit. It just gives you a tiny bit more understeer but it was not enough damage to really impact the pace difference between the two of us.”

Nonetheless by lap 15 Hamilton’s lead had doubled. With Alonso losing around a second and a half per lap, Red Bull grabbed an early opportunity to pit Verstappen, which Mercedes responded to immediately.

Verstappen was told to look after his tyres, Red Bull potentially entertaining the possibility of a long second stint and single stop. But Verstappen urged them to press on, and by lap 3.2 he had painstakingly eroded two seconds from Hamilton’s lead, but it still stood at 6.3 seconds. Then drama struck.

Having been passed by Verstappen immediately after the start and fallen five places to 11th, Bottas almost immediately dropped out of strategic consideration for Mercedes. Their only hope was to run him as long as possible to gain position. By lap 23 he was up to third, and plainly tilting at a single pit stop. With most of the cars behind him still dropping back, Mercedes kept him out, but they paid a high price when his front-left tyre let go without warning.

Tyre failures are, unfortunately, not unheard of in F1, but this one caught Bottas completely off-guard. “Before, we started to get the vibrations and we’ve normally been monitoring the vibration metrics,” he explained. “But now, like, there was nothing, it was feeling like normal. And then it goes.”

Some combination of high cornering speeds, punishing kerbs and worn tyres appeared to be responsible: Pirelli, as ever, is investigating the cause. But the possibility the title contenders might risk a one-stop was now over: Verstappen returned to the pits on lap 41, and Hamilton again shadowed him.

All that remained to be settled in the fight at the front was who would take the bonus point or fastest lap. This was settled when Mercedes parked Bottas’ damaged and overheating car. Leaving nothing to chance, Verstappen came in a third time for the usual set of softs and posted a time 1.8 seconds faster than Hamilton’s best to ensure his rival only took six points off him.

Meanwhile more tyres were going pop. Both Williams drivers experienced punctures: George Russell believed it was a consequence of how hard they were driving in order to be competitive. The same might have been true of Lando Norris, who was 50 seconds ahead of team mate Daniel Ricciardo when his front-left went, to his obvious disgust, as it ended their chances of out-scoring Ferrari and probably killed off their dying hopes of beating their rivals to third in the championship.

The disappearance of Norris from fourth place was good news for Sergio Perez. He slipped up badly on Saturday, failing to accompany his team mate into Q3, but made amends in the race as he patiently worked his way to the front. Norris’ retirement cleared the way for him to close on Alonso, who was still gamely clinging to third in his Alpine. The A521 chassis seemed to like Losail, a rough desert approximation of the Hungaroring where Esteban Ocon took a shock win for the team in August.

Ocon returned his team mate’s favour from Hungary by rebuffing Perez as long as he could. “Tell Esteban to fight like a lion”, urged Alonso on the radio. His team mate bought him three seconds, maximum. That may have been just enough, after a late Virtual Safety Car period triggered by Nicholas Latifi’s puncture meant Perez crossed the line 2.8 seconds after Alone.

Ocon took fifth ahead of Lance Stroll, who having narrowly failed to make the cut for Q3 had a strong run to sixth. The two Ferrari drivers were the last unlapped runners, Carlos Sainz Jnr ahead of Charles Leclerc. A thoroughly unhappy Norris follow in a lapped ninth, and Sebastian Vettel nicked the final point, ruing a first lap which was even worse than Bottas managed, coming around 17th having lost seven places.

A day which began with great promise for AlphaTauri ended in huge disappointment as neither driver scored. Gasly simply lacked pace from the off and his final pit stop dropped him behind the recovering Vettel. Yuki Tsunoda lost two places in a three-wide move with Bottas and Stroll, and pitted early to have a visor tear-off removed from his rear wing, which his team estimated cost him 50 points of downforce.

The two AT02s were separated by Daniel Ricciardo who Monza triumph seems an increasingly distant memory as he notched up his fourth non-score from the six races which followed it.

Hamilton’s seventh victory of the season was clearly his most straightforward. That, and the fact it was achieved at a track which both teams expected would suit Red Bull better, means Red Bull have little positive to take away from this weekend.

The exception was in the constructors championship, where a no-score for Bottas meant they took a six-point bite out of Mercedes’ lead, leaving them just five behind their rivals.

Amid the PR posturing, dithering over decisions and needless controversy which has characterised too much of the last two race weekends, the positive news for F1 which emerged from the final triple-header of 2021 was this: Unless Verstappen wins big in Saudi Arabia, the F1 title fight will go down to the last race in Abu Dhabi for the first time in five years.