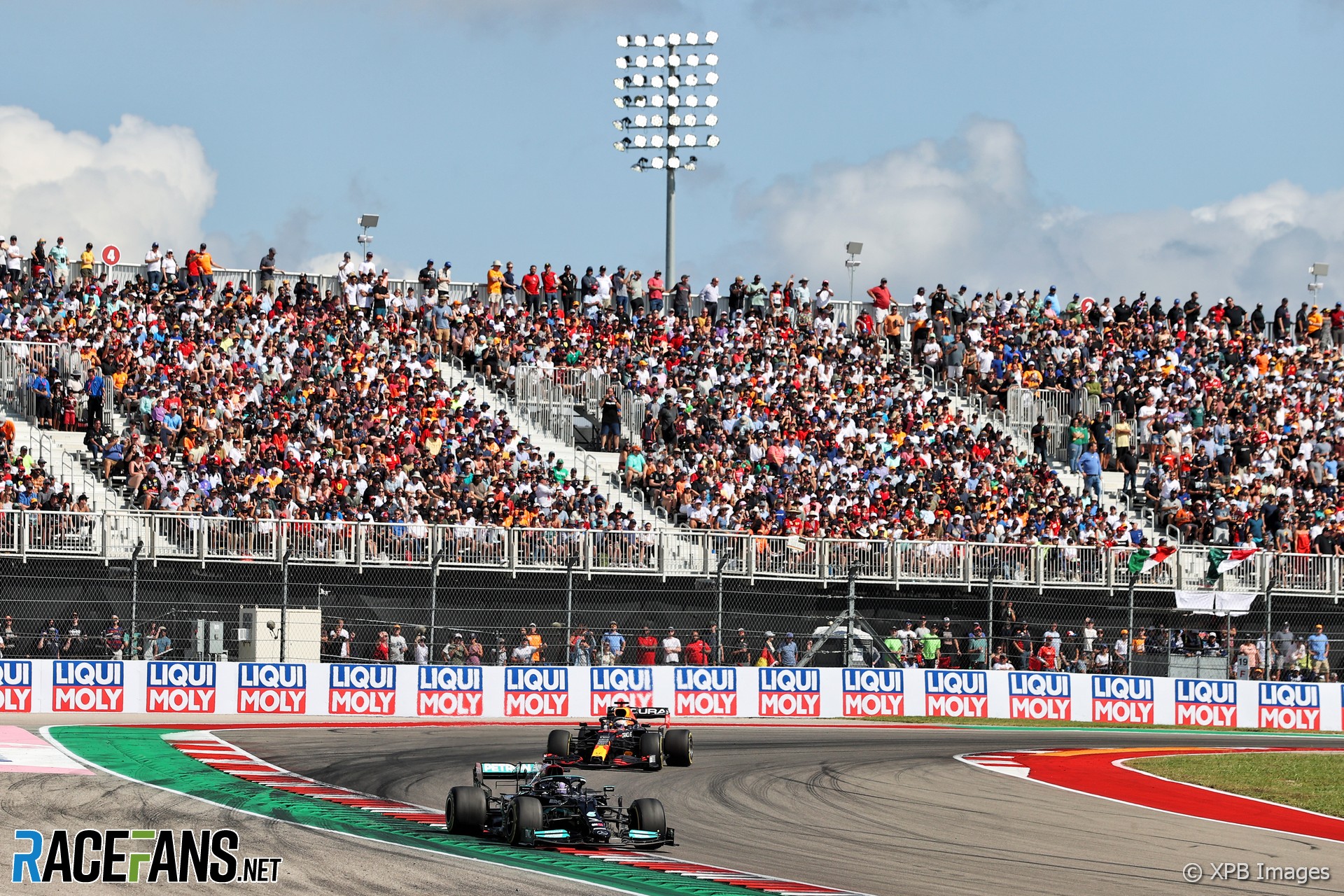 If a country has a tempestuous relationship with Formula 1 it is the United States of America. Here’s a clue: To sweet-talk the USA into buying into its newly-founded World Drivers Championship (as the series was known from 1950-1980 before changing to F1 World Championship) the FIA included the Indianapolis 500 as a qualifying round, despite the event having a vastly different format.

Here’s another: The USA has hosted more rounds of the world championship than any other country bar Italy, Britain and Germany. Yet its 70 races were hosted across a total of 10 circuits and under a variety of titles, with as many as three events in some seasons, then none for five years or more.

In 1959 the championship included both the Indy ‘Brickyard’ – its penultimate inclusion – and a United States Grand Prix, the latter run on an airfield circuit outside Sebring, Florida. Since then F1 has visited Riverside on the West Coast, Watkins Glen in New York State, Long Beach (California), Las Vegas, Detroit, Dallas, Phoenix, Indianapolis (the road course) and Austin.

The USA’s average of seven grands prix per circuit further attests to its on-off affair with F1, for Italy hosted the most rounds (101) at four circuits (the next highest tally). After F1 and Indianapolis fell out in 2007 in the wake of 2005’s Michelin debacle the sport went into limbo until F1 decamped at the Circuit of the Americas in Austin, Texas in 2012 and has raced there since, aside from last year’s interruption due to the pandemic.

In the interim an attempt at staging a race in New Jersey – a circuit in Port Imperial was approved and a 2013 date granted – was aborted after sustainable funding failed to materialise. Similar problems befell an attempt at resurrecting a grand prix at Long Beach, California during the mid-2010s.

However, F1 was expected to gain traction after Liberty Media acquired F1’s commercial rights in 2017 from CVC Capital Partners, who had managed the sport very much for their own account.

Liberty immediately listed the entity on the NASDAQ. The subsequent visibility for F1 at investor and financial media levels spread the word, with numerous investment funds buying into FWONK. Since then New York-based fund Dorilton Capital acquired Williams and MSP Sports Capital inked a deal which provides options of up to 33% in McLaren.

An announcement about the staging of a Miami Grand Prix followed shortly after Liberty’s takeover; still it took intensive lobbying by Liberty and Miami Dolphins (and Hard Rock Stadium) owner Stephen Ross before agreement was reached with Miami Gardens councillors, with a May 8th date on the 2022 F1 calendar confirmed by the FIA for the city’s inaugural race.

Already the chatter is that a third race will follow. Speaking during last weekend’s US Grand Prix in Austin, Aston Martin team principal Otmar Szafnauer – born in Romania but schooled in Detroit and employed by Ford Motor Company in management roles before joining F1 with Honda – called for a return to the country’s west coast.

“We have one in Texas and now we have one on the east coast of the United States in Florida, so it would be good to have something a little bit further west if we could manage that,” he said.

“Three races in the United States would be great,” he continued. “The fan base could absolutely sustain having three races here,” adding, “Either [street or track], if it is a city race it would be nice to be somewhere people could go for something other than just the race, make it some kind of destination.

“Long Beach is one, but anyway, if you can combine things like that then it’s even better. Austin’s a great city, Miami’s a world-famous great city, but for three races in the States, geographically I would move it further west.”

Szafnauer has a point, particularly given the west coast’s love for all things automobile and its high-roller, hi-tech, culture – F1’s primary target market. Now, though, comes news that F1 is in talks with Las Vegas about a return. A source suggested that a deal for a street race in Nevada could be the next addition.

This could potentially happen before an African race, wherever it may be held, if at all – Kyalami, Cape Town or Morocco. The latter is said to be fast moving into pole position to tick Liberty’s ‘African continent’ box.

If all planning permissions for Las Vegas, whose visitor numbers have flatlined in recent years, are issued – an easier process than in Miami given that the gaming city is effectively a commercial enterprise, with hoteliers holding massive sway – and a circuit approved, a Las Vegas Grand Prix could be reality within two years, certainly by 2024. That makes it three in the USA, four if a West Coast race comes to fruition.

Don’t bet against a quartet of grands prix in the USA (population 330m), either – if the Gulf can stage four rounds in a region of 57m spread amongst seven states (one per 15m inhabitants), why not four in the USA, which is effectively a union of states. On that basis, the USA qualifies for 20.

COTA’s sell-out crowd of 380,000 over the three days – around 20% up on the previous (2019) race – provides solid pointers to F1’s burgeoning popularity despite the massive distances and the rip-off local prices many fans faced simply to be part of the weekend.

“This is a historic event,” Epstein told local newspaper Austin-American Statesman during the event. “This is the equivalent of four Super Bowls [in terms of attendance], and we’re doing it all in one weekend.

“The economic impact of that, the attention it draws from the world, I mean, we’re going to have six hours of global coverage to over 100 million people. That’s a wonderful commercial for our community. And the fans, they’re going to have a blast.”

He claims the race could pump $900m (per year) into the local economy – something Las Vegas is sure to take note of – and while the number could well be inflated the overall value of a grand prix is significant after all multipliers have come into play.

The race attendance was impressive, around 20% up on 2019’s numbers, though contrary to some claims, it was not the best-attended F1 race ever, even within the USA. Domestic TV ratings were also strong, up 42% on the last race at COTA in 2019 with a peak of 1.6m viewers.

While modest for a country with a population of 330m – the UK’s Sky (pay) F1 channel pulls around 2.0m viewers from 70m inhabitants – the ratings are certainly heading in the right direction, with the race attendance underscoring the upward trend. US year-on year average ratings per race are up 55% over 2020.

Why, though, this sudden popularity for a Euro-centric activity that less than a decade ago had no foothold in the country, few US-based sponsors, no Detroit representation, and battled to sell its TV rights, ultimately giving them away for a relative pittance?

There are no doubts that the Netflix series Drive to Survive – albeit considered by many in the paddock to be overly dramatised – has been crucial to F1’s soaring popularity in the USA, particularly amongst more casual fans. This has, in turn, driven awareness of the sport, particularly amongst emerging generations.

Ironically, here the ‘don’t-do-what parents-did’ attitude prevalent amongst Generation Z – who believe it is uncool to partake in their parents’ activities – could play a decisive role in this regard, for their (US) parents were not hardcore F1 fans, primarily watching, if any four-wheeler sports, IndyCar and NASCAR.

F1’s “We Race as One” initiative focuses on sustainability, diversity and inclusion, all of them highly valued issues amongst the Z generation, particularly in the USA. That Max Verstappen and Lando Norris outscored Lewis Hamilton during a recent popularity survey speaks volumes, that Ferrari dropped from top of pops behind McLaren and ‘edgy’ Red Bull even more so. That is youth speaking.

“[Netflix has] got to be the single most important impact in North America,” McLaren Racing’s Californian CEO Zak Brown said. “Almost every comment you get out of someone out of the US, they reference Drive to Survive.”

Brown credits F1’s owners Liberty Media for bringing the sport to a new audience,” saying, “I think that’s a great thing that Liberty did very early on, which is recognising that we have this great sport, that we’ve not looked at people into what goes on in the paddock, effectively. Because Drive to Survive is a little bit less about the on-track action and it’s a little bit more about the off-track action.”

He does, though, believe that New York should be the next US venue, telling RaceFans: “The market could definitely handle a third race.

“It’s very complicated to put these races together, so the obvious wish list would be New York would be great, Las Vegas would be great, any of the big markets so I hope a third race happens.”

Thus it can be no coincidence that Wall Street giants Amazon, Cognizant, Oracle and Workday recently joined F1 and/or its teams as partners, with cyber payment platform Crypto being the latest addition to the roster. Indeed, it is the fastest-growing partner sector, and others are sure to follow – and not only from the USA.

Epstein should though also receive credit, but issued a thinly-veiled warning for Liberty to not take growth for granted: “There’s only one hurdle, and that’s the price tag,” he said, adding that Liberty knows that the sport makes “a pretty big economic impact everywhere it goes, and they demand a pretty big price for that. They have a lot of suitors, and that makes it hard. There’s not a lot of events like this.”

This is Liberty’s US challenge – to grow F1 more sustainably than ever before, better than former F1 tsar Ecclestone did and certainly better than CVC ever managed in its 10-plus years at the helm, without devaluing the product. The Gulf region stages grands prix for political reasons and thus sustainability is of little concern to those promoters.

By contrast, US events need to be commercially viable, or the plug get pulled without a backwards glance – as happened variously for 50 years, between 1960 and 2010. That is why the sport wandered all over the North American continent, from Watkins Glen outside New York to Long Beach outside Los Angeles and several places in-between for five decades. Cash in too fast and promoters jump faster than F1 cars get to 100mph.

There are no doubts that the entire continent is under-served by having just three F1 races spread across Canada, Mexico and the USA, but where does the optimum balance lie? Four, possibly five or even six, three or four of in the USA?

Additional events create additional interest, but oversaturation could harm the current trend – as had happened during the pre-Liberty era. Equally, Netflix needs to maintain a fine balance between reality and entertainment – Verstappen, F1’s most popular driver according to a recent survey, refuses to participate due to concerns over his representation – to ensure it maintains interest without switching off loyal viewers.

The same applies to gimmicks versus tradition: reverse grids and sprint races may appeal to Gen Z, but could harm the sport longer term. One gets the feeling that a number of these initiatives are aimed at US audiences, but what if F1 for some reason again goes into a downward spiral? It happened (many time) before and could just as easily happen again. Thus, Liberty cannot afford to alienate traditional markets.

Ultimately Liberty, Epstein and Netflix – aided no end by the likes of Brown – have done a superb job of rebuilding F1 in the USA, but consolidation should be the next step, not a flurry of additional races. Otherwise interest could implode.