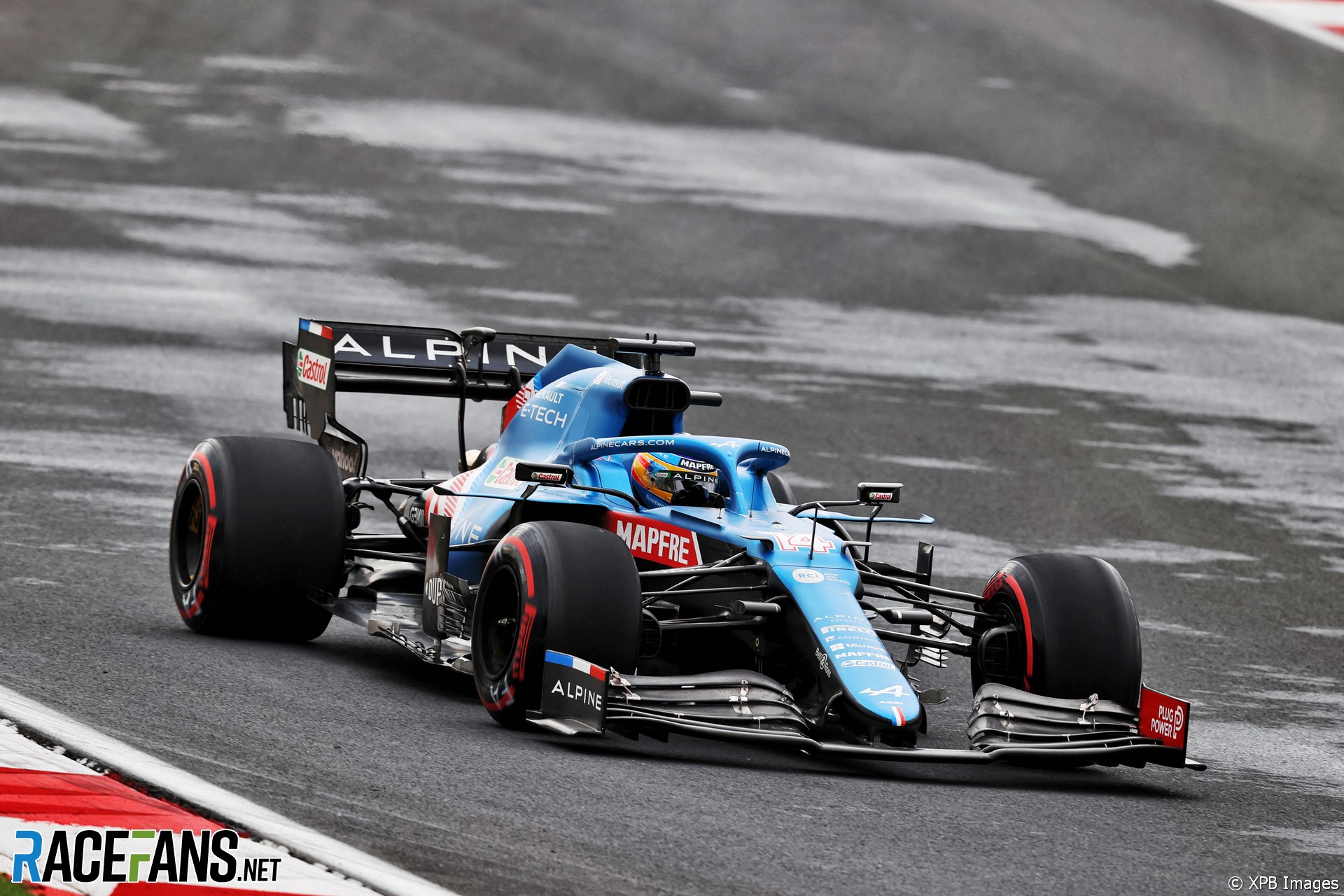 Alonso went unpunished following an investigation into whether he had responded correctly to double waved yellow flags at the start of qualifying in Turkey. Norris also avoided a penalty for crossing the pit lane entry line at the previous race in Russia.

Pierre Gasly, who was penalised for a collision with Alonso during Sunday’s race, was puzzled by the two decisions.

“These last two events I don’t really understand the regulations because to me it’s either black and white, and these two situations for me were very clear,” said the AlphaTauri driver.

“I think it has to be discussed what we are allowed to do because there is, of course, one incident which is a white line, not safety related, and another incident with double yellow flag where safety was related. I’m sure we’re going to discuss that with Michael. But I think all of us in the team were surprised with that.”

The stewards decided not to penalise Alonso after ruling “he did not set a meaningful lap time” after passing yellow flags at turn one on his first lap of Q1. The Alpine driver set a time of 1’29.589, then lapped over six seconds slower on the next lap, then improved to a 1’26.147.

His reaction contrasted to that of Lance Stroll, who was running ahead of him and passed the same yellow flags. On that lap Stroll backed off to a 1’44.856 – over 15 seconds slower than Alonso, who overtook him – then improved to a 1’25.284 the next time around. Stroll also questioned the decision not to penalise Alonso.

“I think the rules need to be consistent, especially in a double yellow, which it was,” he said. “You can’t keep pushing. You can’t set a lap time.

“So I just think that there’s different decisions being made, which is funny.”

Stroll does not intend to change his reaction to double waved yellow flags. “I’m going to stick to doing what I always do,” he said. “Just for safety, if it’s a double yellow I abort the lap, if it’s a single yellow, I lift and then I get back on the gas when it’s green again.

“I just hope the stewards really keep that consistency, though, because I think it’s very important for everyone that the rule is clear.”

Asked whether he plans to raise the matter with Masi at the next drivers’ briefing, Stroll said “I’m sure it’ll come up.”

By backing off considerably less than Stroll did, Alonso potentially put himself at an advantage if the conditions worsened on subsequent laps, making subsequent improvements impossible. The Alpine driver also believed he complied with the requirements of the rules.

“But because it’s the first lap of qualifying, you still set the time. And then the following lap I was three seconds faster without aborting the lap. And that was probably the confusion.”

Although Alonso was cleared on the grounds he did not set a meaningful time, Masi indicated that had the conditions worsened the stewards could have given a different verdict.

“Having spoken to the stewards later on, and also to the team, it was actually explained quite clearly that let’s call it if a dump of rain had come straight after, and it was a meaningful lap time, then the outcome would have been very, very different,” said the race director. “But the facts are that in the circumstances, it wasn’t a meaningful lap time.”

The requirements regarding how drivers should respond to double waved yellow flags could be altered for future races to take similar circumstances into account, said Masi.

“We’ll have a discussion about that and might come up with some adjusted wording for future to remove any incentive whatsoever in that scenario. But it’s one of those unique situations that you could argue that everyone that set a lap time that first lap out, that went through double yellows, was a meaningful lap time because at that point in time it was the only lap that they had set, which was the case with Fernando.”

In Sochi the stewards gave Norris a reprimand, but no time penalty, after he crossed the white line at the entrance to the pit lane towards the end of the race. Norris, who was struggling on slick tyres on a wet track, approached the corner at less than half his usual pit entry speed but was unable to make the turn. The stewards took that fact in mitigation in deciding to only give him a reprimand for an infringement which other drivers have received stronger penalties for.

Masi defended the stewards’ decision not to penalise Norris. “The stewards made the decision at that point based on what they had,” he said. “And that’s history.”