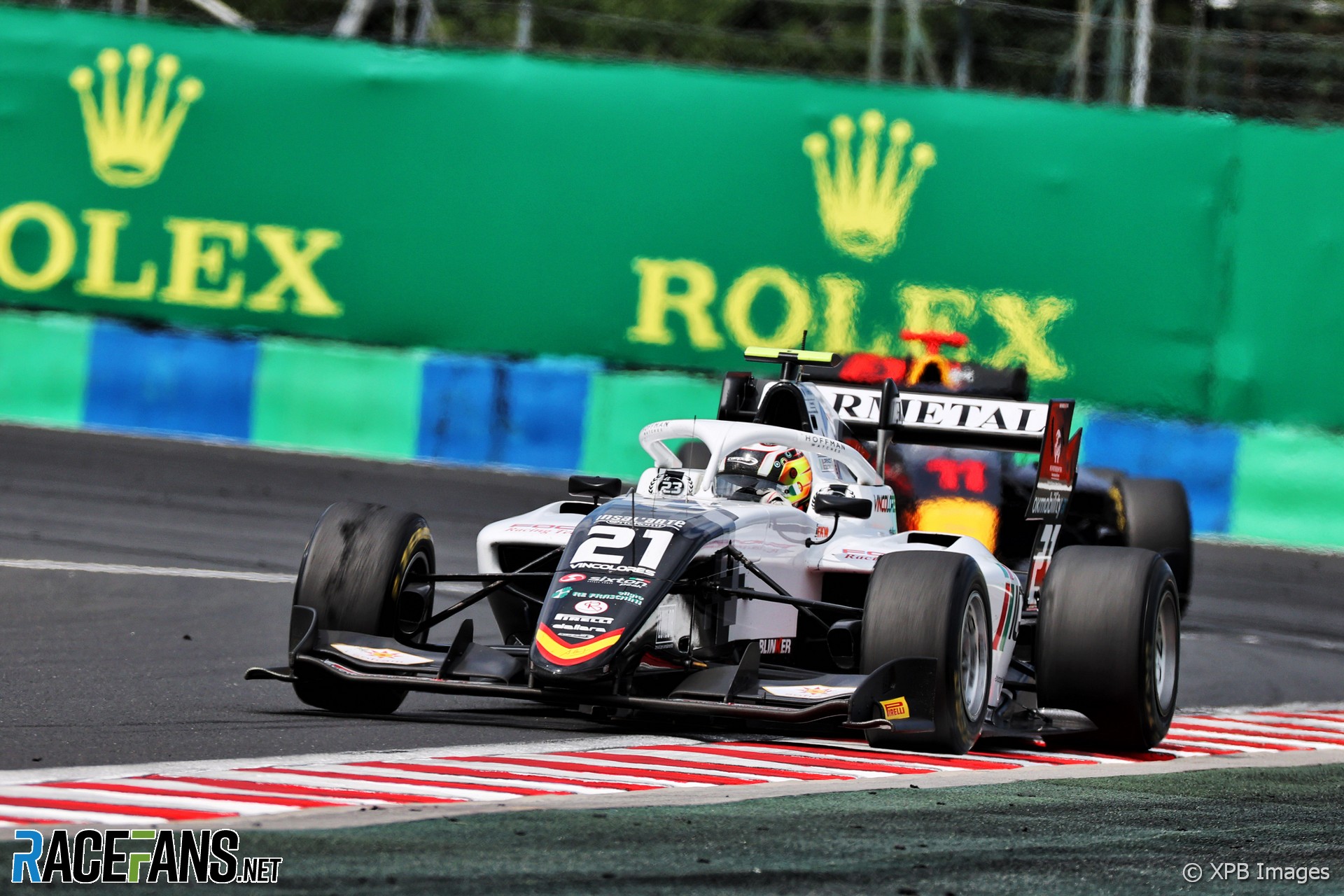 Lorenzo Colombo took his first Formula 3 win – and scored his first points in the series – with victory in the opening race at the Hungaroring.

Jonny Edgar took pole on the partially reversed grid for the first race of the weekend by qualifying 12th yesterday. He held the lead off the line, despite a spirited attempt to take the lead by Lorenzo Colombo, who was forced wide by his rival on the way into turn three.

Olli Caldwell and Ayuma Iwasa were able to stay with the front two, looking almost certain to challenge for the lead. However, what had been quite a lively race in the opening laps turned somewhat processional until lap eight.

At that point, Colombo was able to make what looked like an inspired move around turn one to take the lead from Edgar. But as they left the corner the Carlin driver appeared to lose power, and soon came to a stop with a suspected technical problem. His team said he was “forced to retire from the lead”.

The recovery of Edgar’s car from from the side of the track was handled under yellow flags. Colombo then edged clear of the pack, drawing a second clear of the pursuing Iwasa and Caldwell.

Edgar wasn’t the only driver who was forced to park up. Frederik Vesti, already having troubled weekend after collecting three-place grid drop in qualifying, retired with apparent car trouble on lap 16.

That brought out the Safety Car while his ART machine was recovered, Vesti looking heartbroken by the side of the track. Colombo held his lead after the restart, but the stewards were unhappy with his driving during the period, and announced he is under investigation for falling more than 10 car lengths behind the Safety Car.

In the brief period of racing before the chequered flag dropped, Colombo built up a 1.8-second lead over his pursuers. But with the field closely bunched behind, even a five-second penalty would drop him to seventh place.

Colombo dedicated his race win to the memory of former Campos team boss Adrian Campos, who died in late 2020. But Iwasa, second, will await the outcome of the investigation with particular interest, as it may mean the Hitech driver replaces Colombo as today’s debut winner. He joined Colombo on the podium with third-placed Caldwell.

Logan Sargeant came in fourth ahead of Clement Novalak and Dennis Haguer – the points leader one of few drivers to make progress in the race. His team mate Arthur Leclerc, who will start tomorrow’s race from pole position, gained little ground from his 15th-place start.