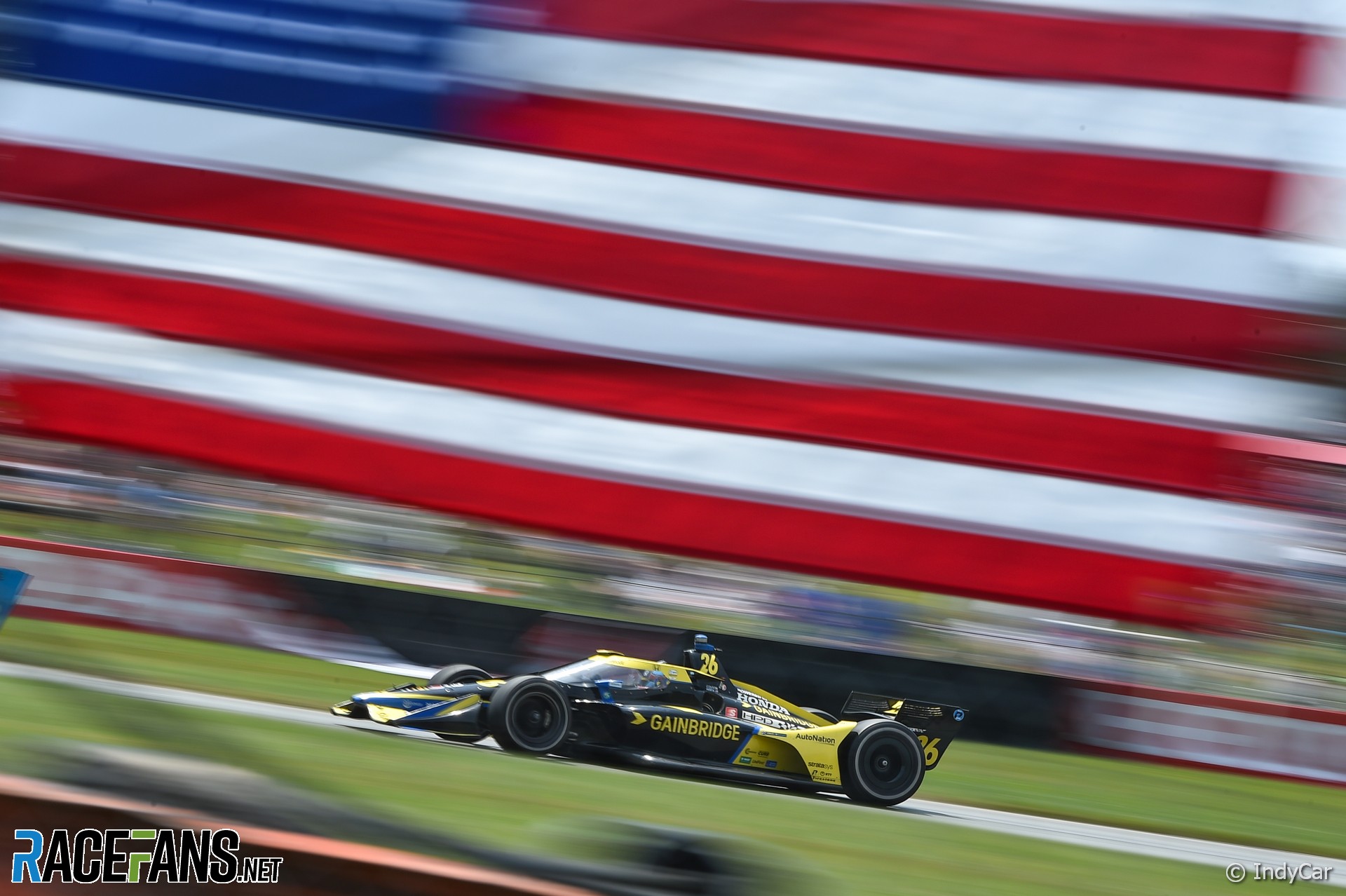 Formula 1 wants a driver from the United States, and it wants more races there too, and so it’s natural that people ask the question why the FIA and Formula One Management don’t look at IndyCar.

It’s got venues with the capability of hosting an F1 grand prix, and drivers more than capable of being on the pace were they to land in F1. No less a driver than Mario Andretti has praised the potential of Colton Herta, while two-times champion Josef Newgarden exudes quality.

But IndyCar, one of only a handful truly professional single-seater championships in the world, is being snubbed when it comes to FIA superlicence points. Third place in junior series Formula 2 automatically qualifies a driver to race in F1, while only becoming champion in IndyCar will do the same. In a series with multiple engine suppliers, double-points races of historic prestige and teams of varying competitiveness, that is an achievement significantly harder than starring in F2.

Winning the FIA Formula 3 Championship title is comparable to second place in IndyCar in superlicence points, and winning fourth-tier series Formula Regional European Championship earns more than third in IndyCar. That’s valuing race wins at a professional level lower than a junior championship which had a grid of 11 cars, teams that left the brakes fixed on their cars and driver coaches getting called up to race to raise the competitivity level in 2020. Is the FIA over-valuing its series at the expense of IndyCar?

Romain Grosjean has entered IndyCar this year from F1, and already has a pole position and a podium. But he’s 16th in the standings with six races to go; it’s that competitive. In fact, only six drivers have more top five finishes than Grosjean and he’s missed three races.

One of those drivers is McLaren Schmidt Peterson’s Patricio O’Ward, the star of the Texas and Detroit double-headers as he took a win and a third in both. He currently lies second in the points, and his maiden IndyCar triumph has earned him an F1 test with McLaren at the end of this year.

“I think there’s a lot of talent in IndyCar and some drivers there that are extremely capable of being competitive in Formula 1,” McLaren racing CEO Zak Brown said in response to a question from RaceFans. “I think the superlicence process can probably be reviewed as far as it relates to that.”

Of the 40 drivers to have raced in IndyCar this year, only the past three champions Dixon, Newgarden and Simon Pagenaud, as well as 2018 runner-up Alexander Rossi can claim a 2021 superlicence based off their American racing accomplishments, and Pagenaud only does so with the loosening of the superlicence requirements during the pandemic.

Brown also talked about Kevin Magnussen’s IndyCar debut with his team, with no prior testing, at Road America a fortnight ago. Magnussen qualified 21st, led six laps in the middle of the race and according to McLaren was on for a top 10 finish before electrical issues struck.

“Pretty difficult situation, to get dropped into a race car where you’re making a seat and getting out in a race car shortly thereafter but the team really enjoyed working with him,” Brown said.

“He was a total professional, fast, but I think it shows how difficult the series is, that you can’t just drop in and expect to be competitive after an hour of driving the race car for the first time.”

It’s a complex car that puts an emphasis on drivers’ physical ability as much as fuel and tyre management. Surely it’s an obvious route to grand prix racing?

But while F1 CEO Stefano Domencali admitted in a recent exclusive interview with RaceFans he is eager to have an American driver in the series, he said he is content to leave the superlicence points question in the FIA’s hands.

“I would say that is something that it’s part of the FIA responsibility in the definition of the points for the superlicence,” was his response to IndyCar’s superlicence snub.

“I think that every year there is this kind of discussion that is related to the fact that every year, depending on the different technical challenge that the championship, there is quite a complex key to follow. And I think that is a point to address to the [FIA Single-Seater] Commission to respect the role.”

From that statement is can be read that F2 is posing a greater technical challenge than IndyCar, which has 500-mile races and no need for reversed girds to add strategic variability.

IndyCar, including its various pre-split forms, beat F1 to driver-controlled overtaking aids, high-degradation tyres, bioethanol fuels (since 2007), safety advancements such as SAFER barriers and full course yellows. Even F1’s new aerodynamic formula for 2022 can be compared to the aero kit IndyCar adopted three years ago.

There hasn’t been hybrid power yet from current engine suppliers Chevrolet and Honda, but that changes in 2013 with the existing 2.2-litre V6 twin-turbo units being succeeded by larger 2.4-litre engines coupled with a spec hybrid system consisting of a multi-phase motor, inverter and electric storage device for regenerative braking.

That move, combined with F1’s aerodynamic simplification, essentially brings the series the closest together they’ve ever been in the 21st century. And that means the FIA really can’t ignore the relevance of a series with roots far older than its own.

However, it’s in no one’s interest to turn IndyCar into an F1 driver pipeline even if there may be more cross-pollination of other roles in the hybrid era.

Rossi was the last driver competing under the United States’ flag to make F1, and he set a cautionary tale on the return to his home country. He scraped his way onto the back of the grid with Manor mid-season in 2015, after previous false starts at debuting, and while he had a reserve driver role for 2016 he headed off to IndyCar to race. By his sixth race, the Indianapolis 500, he had won.

His father and manager Pieter, while involved throughout all of his junior single-seater career in Europe, had far better standing securing Rossi an IndyCar future at a top team than signing with any F1 team. Conversely, European managers whose own lives as well as their clients’ have been entirely based on that continent find it tricky to get deals in America no matter how good their driver is. It is hard to get a top IndyCar seat.

Rossi again is a good example here, with prolonged negotiations in 2019 ultimately resulting in a three-year contract with the Andretti team his IndyCar career had started with (initially in a car co-run by Bryan Herta). There had been several rounds of going back to the table seeing who could offer what financially, and also in resources to win a title with, as rival teams were interested in his signature.

His profile, income and development as a driver has been far higher than had he stuck around in F1, and in hindsight strengthened the message from 2016 even further that a American can reach F1 but only at the expense of the kind of successes they could have at home.

And while Grosjean has been welcomed with open arms this year, mostly because of the feel-good story behind his racing return, there is no demand in the IndyCar paddock for more F1 names to follow – although Magnussen, his former team mate at Haas, now appears to be aiming for a full-time 2022 drive.

The series is growing in stature year-on-year, with increasing television figures and public recognition of its top drivers, and its popularity has led to a new race on the streets of Nashville joining the calendar next month. Domestic demand for seats far exceeds supply, and there aren’t enough engine leases to cover the number of interested teams either, which will become even tighter in the hybrid era as costs are expected to increase.

Ex-F1 drivers may have inflated negotiating power with their hybrid experience and budgets, and that could put current names on the grid under threat. It’s no surprise that IndyCar drivers are already working on 2023 contracts where possible.

Boosting IndyCar’s superlicence points becomes an ineffective move the moment more superlicence holders start moving there, and because of increased F1 relevance could then even make it a rival to F2 for young drivers with big budgets wanting to get those points to race in F1. IndyCar can’t afford to have drivers with only one-year programmes on their mind outbidding long-term prospects for seats. Influxes and exoduses of drivers would be as costly as each other.

This is in the FIA’s interest as much as IndyCar’s, particularly when it comes to the question of budgets. Since introducing its current Formula 2 car in 2018, the only driver who isn’t the son of a multi-millionaire to make it to F1 and remain beyond their rookie season is George Russell. It’s under pressure to do what it can to make F2 more successful as a generator of F1 talent, and increasing IndyCar’s attraction won’t be its answer. Especially when the series is doing a enough job of that itself.

73 comments on “F1 wants a US driver, but an IndyCar pipeline suits no one”