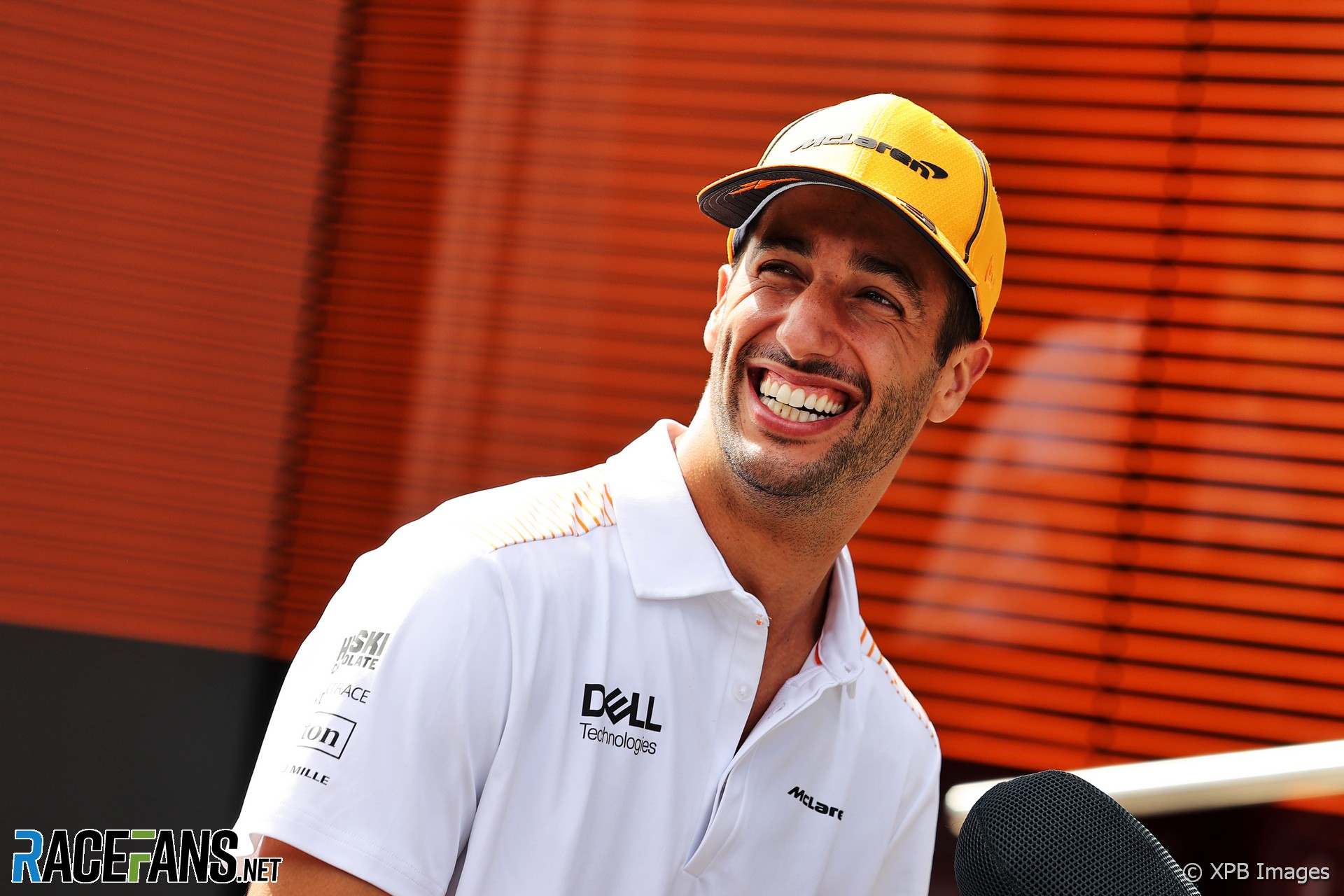 Daniel Ricciardo admitted he was left feeling “really low” after the Styrian Grand Prix. But a promising recovery drive in the second race at the same track meant he left Austria with his trademark grin back on his face.

His Styrian Grand Prix was spoiled by a loss of power which cost him several places. But Ricciardo’s starting position of 13th that weekend showed he has still not got to the bottom of the qualifying problems which have dogged him since he arrived at McLaren.

The Austrian Grand Prix a week later initially followed the same script. Ricciardo failed to make it to Q3 while team mate Lando Norris qualified on the front row. But in the race Ricciardo moved from 13th to seventh, and making up those positions was a mental boost.

“It was quite fun,” said Ricciardo, who started the race on a set of medium tyres to aid his climb through the field. “At the beginning we were just fighting with the soft starters. And once they pitted I was able to get a little bit of a rhythm.”

Having cleared the early pitters who started in the lower reaches of the top 10, Ricciardo found himself in a scrap with the delayed Sergio Perez and Ferrari due Carlos Sainz Jnr and Charles Leclerc.

“I always had pressure from Charles or Sergio or Carlos at the end,” said Ricciardo. “It was a busy race defending. But it was fun.

“The start was good again, the restart was good, I enjoyed it. I think there’s still certainly some speed to find but I enjoyed myself a little more today. That’s the most important thing right now, to get some enjoyment back.”

Norris finished the grand prix in third, spending the majority of his time in clear air, while Ricciardo’s joy at making some gains and having something to get stuck into was countered with it being “quite a stressful race” where “I wasn’t trying to attack, I was [always] trying to defend”.

“There was moments where I had good speed, but then other moments where I just wasn’t,” Ricciardo admitted. “I think it was the maximum I could do with my current feeling and speed.”

Seventh place is only one position off his highest result of the season, which while encouraging for a recovery job also shows how much of a struggle 2021 has been for Ricciardo.

“It’s been a little bit difficult more times than not this year,” he admitted. “So just trying to have some fun in some battles, and annoy some other drivers, I enjoyed that.”

McLaren team principal Andreas Seidl praised his performance, which helped stretch McLaren’s lead over Ferrari in the battle for third in the constructors’ championship. However Ricciardo has so far contributed less than one-third of the team’s points this season.

“Some of the cars in front of us, we could beat by strategy,” said Seidl. “Also with the fact that I guess where Daniel started the race was not reflecting the performance he and the car can do. That’s why it was also clear that the objective for was to move forward and score good points.”

That Ricciardo “could pull off this race” for McLaren pleased Seidl, but he also noted the mental benefit for his driver.

“Hopefully that gives him now good energy going into the next two weeks, preparing then for our home races at Silverstone.”

Reclaiming his enjoyment of F1 in the space of a race was good going, but Ricciardo is cautious of swinging sharply from the doldrums of a week ago to complete satisfaction.

“I try not to be too extreme, because it’s too obvious,” he said. “Your bad days, you’re like this, and then when everything’s good you are a nice person. I enjoyed the race, but it’s still been a difficult two weeks here.

“For sure I had a bit more comfort, within myself. But it’s just to be really leaving the circuit with really like a lot of fulfilment hasn’t really been the case. And it’s been a difficult period, just for myself in the sport at the moment.

“I think that’s why having these lows and some, not even highs, but just some better days [help]. I’m trying to stay a bit more level.

“There’s a lot of things as well, like outside things, family and not being home for a long time now. I think it starts to affect you, and I think the bad days then become even worse because everything gets compounded. So I’m trying to stay positive, or at least level.”