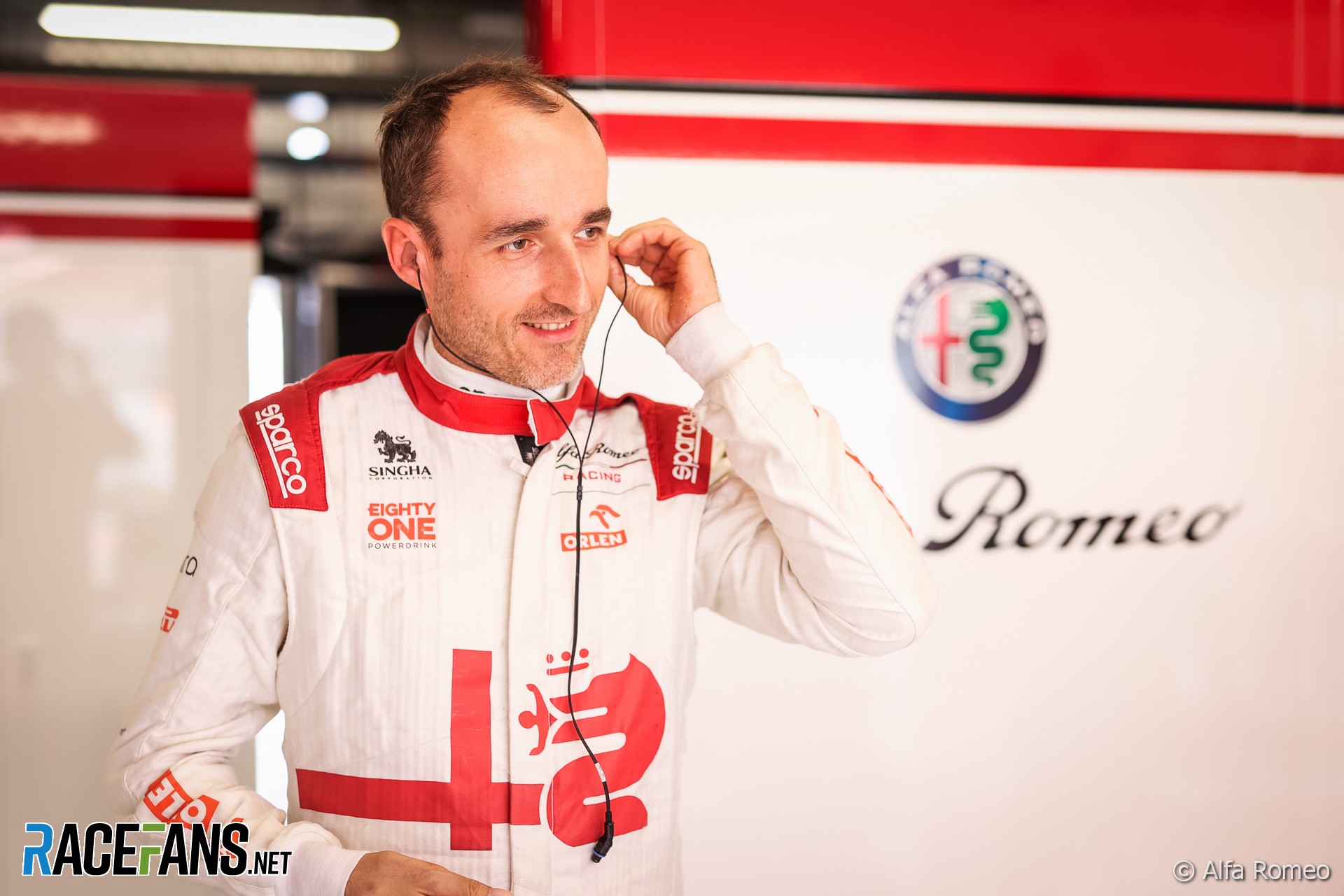 Alfa Romeo test and reserve driver Robert Kubica told RaceFans about the team’s improvements and his experience of the new 18-inch tyres which will be introduced for the 2022 F1 season.

“It was a bit of a difficult session, I would say, not a great feeling in the car [but] still nice to be back in an F1 car and although it was difficult, we managed to do what we were supposed to do,” he said, summarising the session.

“These cars are the same as last year, but they’re not the same, if you know what I mean.”

As well as testing for the team last year, Kubica was the first driver to get behind the wheel of their current car when it was launched in February. “Altogether our package is more competitive in the last year,” he explains, singling out the team’s much-improved Ferrari power unit.

“The Maranello guys with the power unit have done a good step forward. Probably last year we were lacking quite a bit. So I think we are in a stronger position.”

The engine has made gains across the board, he says. “I think the driveability has been always a strong point of Ferrari’s power unit, it’s just that we have more power, more torque and generally more horsepower. It’s quite significant.”

As he has been working in a development role at Alfa Romeo, Kubica said that he has been following the 2022 regulation changes with interest.

“It will be a big change, massive change not only from the perspective of fans, of viewers and the shape of the cars, but generally the pace will be different, hopefully.

“The main goal was to allow following the other cars closer. Hopefully this will be achieved. If this will not be achieved, then we have a big problem because in the end, racing drivers always want to have the most powerful car, the lightest and most downforce and next year it will be a big difference.

“Additionally, we have the 18-inch tyres which we have been testing not long ago in Barcelona. So there will be a lot of changes and it will be completely reset. And it will be a very exciting period for the teams but also for the drivers. Everyone will be looking forward [to it] and when you have such big regulation changes, you never know where you are, so it will be quite interesting.”

Pirelli’s 2021 tyres have proven controversial, after dramatic blowouts in Baku and graining issues at Paul Ricard for some teams. Kubica is one of the development drivers who tested at Barcelona last month using a modified chassis to help Pirelli and teams develop the new, bigger tyres.

Kubica said he was “quite positively surprised” by Pirelli’s new rubber for F1’s coming switch to 18-inch wheels after he tested them using a modified ‘mule car’ earlier this year.

“It’s a bit unfair to compare to the current car, using 13-inch [tyres], because in the end we used a kind of prototype car which was not built for 18-inch tyres, but generally the feeling was quite positive.”

Formula 1’s official tyre supplier faced criticism after two failures occured during the Azerbaijan Grand Prix earlier this month. Kubica said tyre development is “not as easy as it looks” given changes to F1 cars in recent years.

“I know there is a lot of complaints about the Pirelli tyres, but the fact is that with the current weight of F1 cars, it’s not as easy as it was 15 years ago when the cars were 150 kilos lighter.

“I think there is still margin to improve, especially on some sample ones that I think were working very well and some others [had] things that hopefully Pirelli will be able to improve.

“It’s difficult because in the end, they have to deliver a product which works for every car and it’s impossible to make everyone happy. And also for them, with the regulation change it’s a big unknown but I had a positive feeling about the prototype 18-inch tyres.”

Kubica said the difference in terms of the feel of the tyres was surprisingly small using the adapted car.

“That was an even bigger surprise, because if I would [have] closed my eyes, probably I would not really notice when the car is riding normally on track.

“Over the kerbs, obviously there is a bigger effect but I think the Pirelli target, as a construction, was to achieve quite similar loads as on the 13-inch and you would expect the [18-inch] tyre probably to be stiffer, but it doesn’t really feel like that.

“On the flat surfaces, it’s really hard to notice the difference. Then, of course, in low speed there is a lot more inertia going and in the end of tyres are heavier, wheels are heavier. But when the car runs on smooth Tarmac, it’s quite similar.”

Although he continues to test Formula 1 cars, the 2019 Abu Dhabi Grand Prix seems destined to mark his final start in the world championship. His attention has now turned to sports car racing.

Kubica intends to decide on his 2022 plans in the autumn, following his debut in the Le Mans 24 Hours, where he will compete in the LMP2 class for Belgian sportscar team WRT in a car shared with reigning Euroformula Open champion Yifei Ye and former Formula 2 racer Louis Deletraz.

“I will decide in September, probably what I want to do. For sure, the biggest event of my season will be Le Mans and first of all, I want to live this unique race experience and then we will see.”

If the Le Mans debut goes well, prototype sportscar racing’s new Hypercar and LMDh classes could be his next career destination.

“In the end, endurance racing might be a potential destination. I think there’s quite big interest, ahead of 2023 season, with the new cars, new chassis and some car manufacturers coming in. But still, it’s got quite a long way to go.”