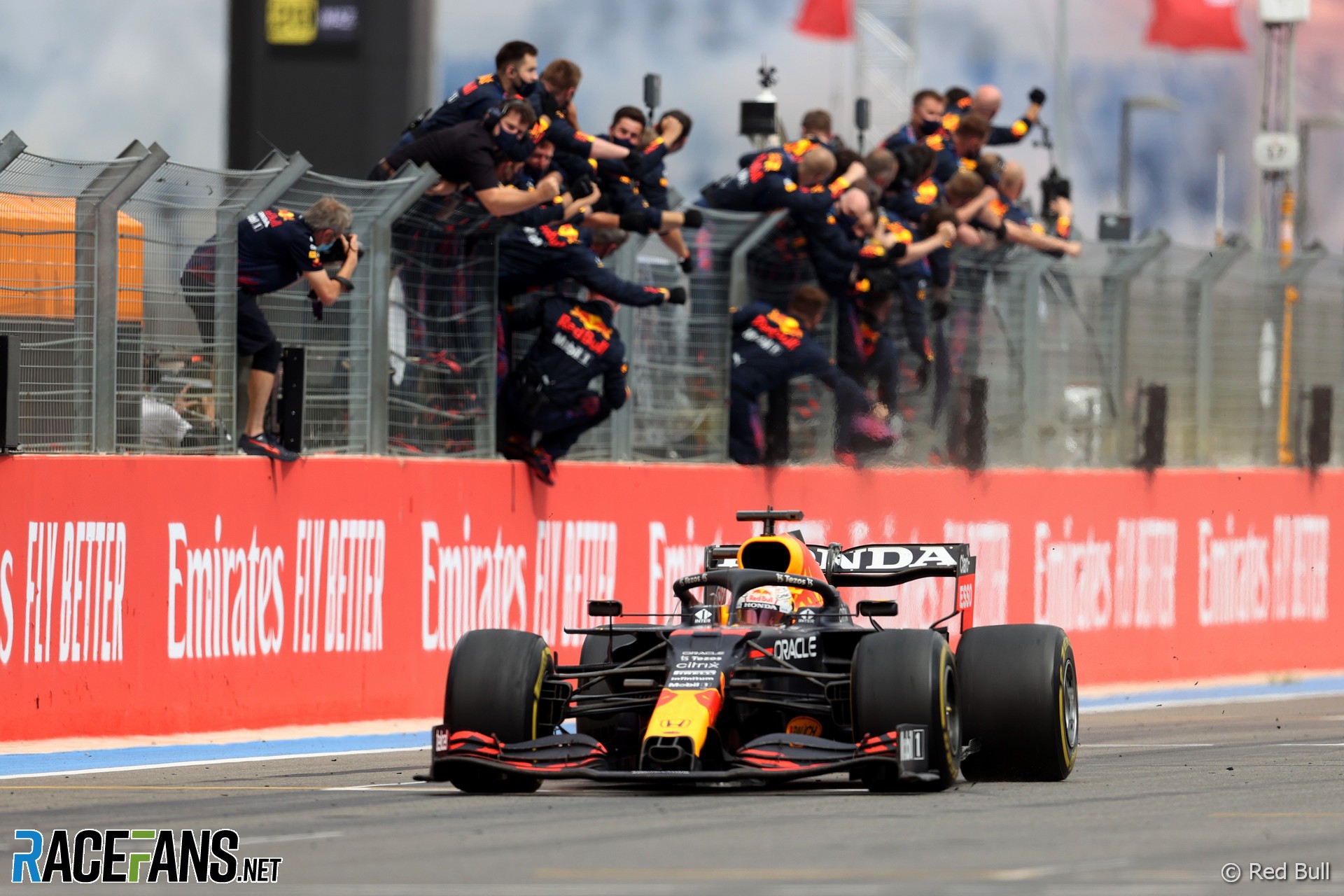 In Bahrain Max Verstappen fluffed a late-race pass on Lewis Hamilton and handed victory in the season-opening race to his championship rival.

In Spain Hamilton dived into the pits before his rival, seeing off a potential threat by being the first onto fresh tyres, and won again.

In France there were opportunities to make the same mistakes again. But Verstappen and Red Bull avoided them, and made amends for what looked like a race-losing error within seconds of the start.

When the F1 drivers ventured out of the Paul Ricard pits for their first laps since qualifying, they discovered remarkably different track conditions. Heavy rain had fallen in the morning – the track was awash during the F3 race – and although the track had dried it was cooler by more than 15C.

The effect that had upon the cars’ handling was profound. Moreover, it contributed to the most unpredictable race Paul Ricard has seen since F1 returned to the track three years ago.

The first surprise came as the field rounded turns one and two. Or, in the case of Verstappen, turn one, as he cut across the inside of the right-handed turn two.

Hamilton took up the lead, though to begin with Verstappen sat within close range. Sergio Perez didn’t have the same immediate speed as his team mate, so the leading trio drew away, Perez another four seconds in arrears, and Carlos Sainz Jnr rapidly disappearing behind them in fifth place on what was going to prove a dreadful afternoon for Ferrari.

Having stayed little more than two seconds behind Hamilton, Verstappen suddenly lost a second on lap 15. This looked like a pivotal moment – a chance for Mercedes to take their first pit stop, bank the advantage and ensure Hamilton could motor home in the lead.

Surprisingly, they chose to bring Bottas in. The team later explained this wasn’t an attempt to bag a one-two by jumping Bottas ahead of Verstappen, but a necessary response to a vibration on Bottas’ car.

Even so, as he’d been following just over two-and-a-half seconds behind Verstappen, it was inevitably going to provoke a response from Red Bull. Sure enough, they brought their leading driver in, yet surprisingly Mercedes left Hamilton out.

Red Bull made them pay for that oversight. Though Verstappen had been 3.1 seconds behind Hamilton before pitting, even though Hamilton gave away little when he pulled in the next time around, a rapid out-lap by Verstappen helped put him into the lead. Mercedes had been handed a shot at victory and squandered it.

Even Verstappen was surprised by this development. “My out-lap was good but I didn’t expect the undercut to be so big,” he said. “But when I went out I suddenly had so much more grip on the tyres everywhere.

“I don’t know how fast Lewis’s stop was or whatever, so I need to look at it again, but I think nobody – including us – we never expected to undercut Lewis.”

The benefit of his new tyres wore off quickly, however. “With new tyres you have one lap where of course everything feels a lot better. [But] as soon as I was ahead the next two laps, they didn’t feel so great anymore.”

Could Hamilton wrest his lead back on the track? Over the laps which followed he pressed Verstappen hard. But Red Bull had fitted a fresh engine and slimmer rear wings to their cars, making it one of the quickest on the straights, while Hamilton was at the bottom of the speed trap.

“The new Honda engine will have some more horsepower, I guess,” Mercedes team principal Toto Wolff had observed the day before. “It’s pretty normal if you put the new engine into the pool.

“On the other side they run a much less draggy rear wing than us, which in absolute lap time is good for them.” That set-up wasn’t an option for Mercedes, he said. “For us it wouldn’t have functioned because even with their lesser downforce, rear wing, they were still able to do the sector times in sector three through the corners that we had.”

So much was Red Bull’s straight-line speed advantage that even when Hamilton crossed the starting line within half a second of his rival, he could not mount a serious attack.

After eight laps of this, Verstappen began to draw clear. But now there was another concern for the strategists: Despite having switched to the hard tyres, the lap times were climbing again. Whether this was a consequence of the cooler track, the reduction in rubber on its surface, the higher tyre pressures enforced for this race, or a combination, it was tipping what was previously a nailed-on one-stop race into two-stop territory.

Red Bull had been stung by Mercedes in this kind of strategic fight before, and weren’t about to be again. As lap 31 passed, both Mercedes drivers were clearly losing pace, and the team has obvious reasons to consider a second pit stop. The problem was that doing so would drop them behind Perez, who made his first pit stop later than the other three, and would obviously be much more obliging for Verstappen.

So on lap 32, after just 14 laps on hards, Red Bull surrendered the lead and put Verstappen on a set of medium compound tyres to cover the final 21 laps. Perez scampered out of the way when his team mate appeared in his mirrors on lap 34, losing 1.4 seconds to help his team mate progress.

The value of that sacrifice could be appreciated by the end of the race. After cruising past Bottas for second on lap 43 – the Mercedes driver aiding his progress by out-braking himself at the chicane – Verstappen arrived on Hamilton’s tail on the penultimate lap.

He might have found his rival less co-operative had it been the final tour, even given the enormous speed difference between the pair. But Hamilton recognised the futility of trying to delay a driver with much fresher tyres in a DRS zone. “He had the DRS open and if he didn’t pass me there, he would have passed me the straight afterwards,” he said.

Three laps earlier, Perez had relieved Bottas of the final place on the podium. He ran off the track while doing so, and Mercedes decided to gamble on leaving Bottas out in the hope his rival might get a time penalty. That would have handed them three points extra instead of the one they passed up by declining to put Bottas on a fresh set of tyres to set the fastest lap. Perez was cleared, however, and Verstappen added the bonus point to complete a maximum haul of 26.

The driver who held fifth at the end of lap one – Sainz – fell out of the points places five laps from home. His team mate Charles Leclerc, who started lap two in seventh place, had plummeted to 16th after a second pit stop. It was an abject race for Ferrari, who apparently struggled more than any of their rivals to cope with the overnight change in conditions.

Ferrari’s struggles left a wide open goal for McLaren and they seized their opportunity, Lando Norris and Daniel Ricciardo taking the next two places after the top two teams. That 18-point haul swung the battle for third place in the constructors’ championship back in their favour.

Norris extended his points-scoring run with fifth place in a race which began unpromisingly. A gear shift glitch cost him two place at the start, and there was some grumbling on the radio about the manner in which Ricciardo got ahead of him.

But it soon became clear the MCL35M was much happier on its tyres than the SF21. “I think we were good in the first stint,” said Norris. “Everyone was so slow – I think the Ferraris were very slow and they were holding up the AlphaTauri and the Alpines. Then everyone just really destroyed their tyres.”

While Ricciardo ahead pitted early to trouble the Ferraris – jumping Sainz and soon passing Leclerc – Norris ran long on his first set of tyres. “Although it felt really terrible at the end of the first stint, I still didn’t come out that far behind all of those cars on some fresh tyres.”

Norris could also afford to treat his tyres better in the initial warm-up phase. “I could bring them in nicely and so on. I created a big delta on the tyres to quite easily come back through. So it was a good, fun race for me.”

He worked his way past both Ferraris and Pierre Gasly – the latter giving him quite a hard time as he did – and finally Ricciardo for fifth. Behind Ricciardo and Gasly came Fernando Alonso and the two Aston Martin drivers, who ran long opening stints to help secure the final points-paying positions.

Behind Sainz was George Russell, a lap down and somewhat bemused at how he’d managed to beat an Alpine, an AlphaTauri and a Ferrari yet not score any points.

After Verstappen took pole position on Saturday, Red Bull team principal Christian Horner commented that if they could beat Mercedes at Paul Ricard, they could beat them anywhere.

This was the third win in a row for Red Bull, and had it not been for Verstappen’s left-rear tyre blow-out in Baku, it would have been three on the trot for him as well. As it is, he has extended his championship lead to 12 points.

But more significant than that is what winning at a track like Paul Ricard means for Red Bull. As Horner indicated, victory on a road circuit which is typical of many tracks which make up the coming rounds – beginning with an effective trio of home races for Red Bull – is the strongest indication yet that Verstappen is ready to end Hamilton’s reign as champion.