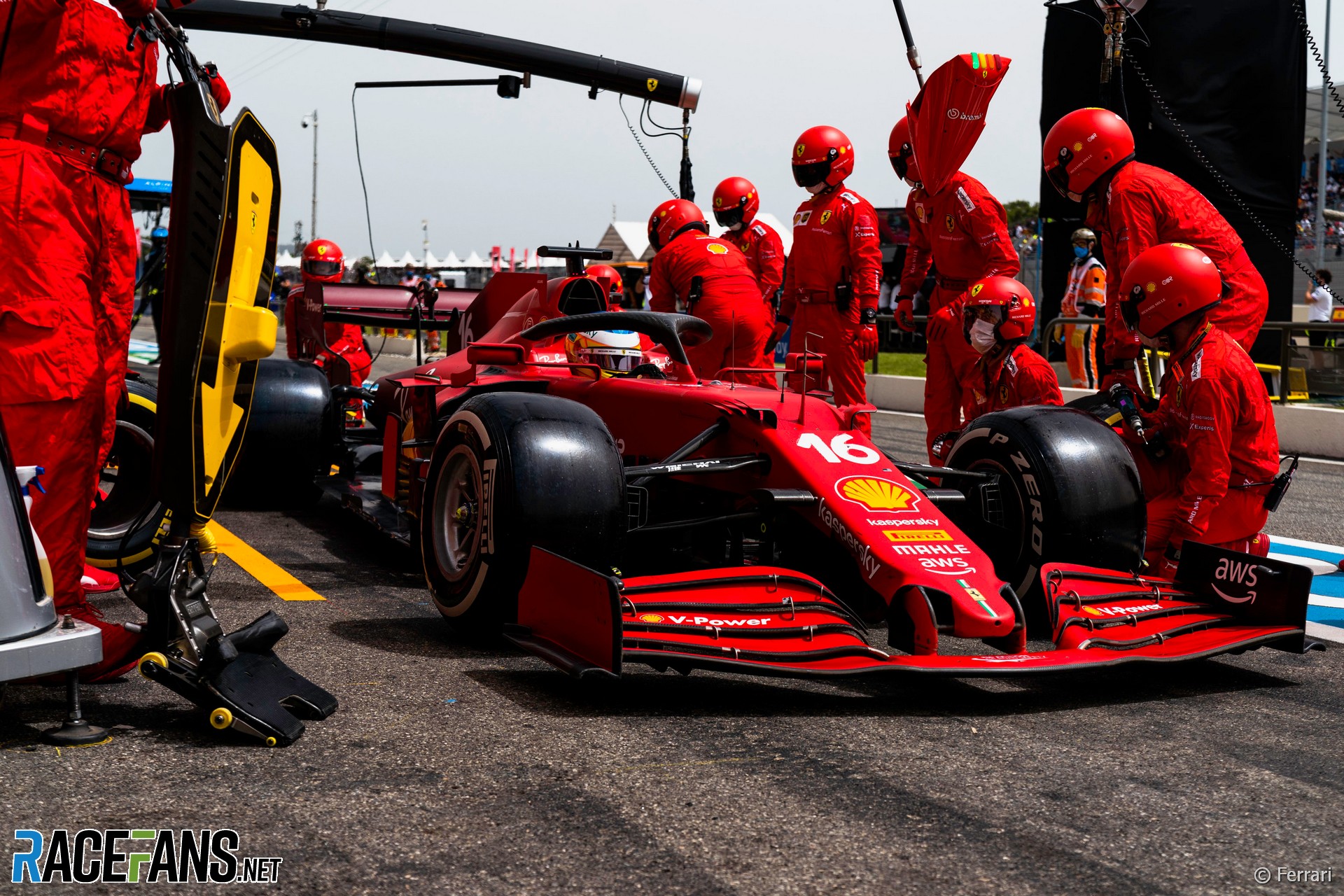 Ferrari arrived at Paul Ricard having taken back-to-back pole positions and a combined 36 points at the previous two rounds.

They left after failing to score a single point in the French Grand Prix following one of the more severe descents down the order seen in a single race in some time – from fifth and seventh on the grid to 11th and 16th at the finish.

While Ferrari’s lack of race pace was of little surprise to the team, the scale of their plight clearly caught them off-guard.

Even after a solid qualifying session for Carlos Sainz Jnr and Charles Leclerc, Ferrari’s sporting director Laurent Mekies remained conservative as he spoke on Saturday evening about the team’s chances for the following day as the sport returned to more traditional circuits following the previous two street tracks.

“We are expecting to suffer on this set of tracks,” Mekies admitted. “We would certainly say that these tracks present a great challenge for us because it’s a way to further check how we correlate, how we prepare and how we understand our car.

“Talking about weaknesses, the next big topic for us is to find the same sort of consistent pace at the top of the midfield, also in the race – which has been a bit more of a rollercoaster.”

Throughout the young 2021 season so far, Ferrari had recognised a pattern of their long-run race pace often failing to live up to their promise over a single lap. And the French round would prove to be the most extreme example of the season so far.

“It’s been a tendency and, I’m not going to lie, it’s been in the back of our minds a bit going into every race,” explained Sainz. “We tend to struggle a bit more in the races than in qualifying.”

Before the race had even begun, Sainz received an early warning about how his afternoon was destined to unfold during his reconnaissance lap when he locked up approaching the Beausset corner and skidded onto the red adhesive run-off strips.

“On the laps to the grid, the track was very, very tricky,” Sainz explained. “I actually had a moment – I nearly lost the car in turn 11. So this already told me that the track was in very, very different condition.”

Earlier rain had washed the Le Castellet track of the rubber built up over two days of running on its newly laid surface. Despite Mekies’ projection that slightly cooler track temperatures may in fact benefit the SF21, it would prove not to be the case.

“It seems that today the track was slower, less grip,” team principal Mattia Binotto explained. “Maybe the rain of the morning, a greener track. So having less grip somehow we’re sliding more and when you start sliding more you create the graining.”

But while the track conditions were the same for all 20 cars in the race with tyre degradation more severe than everyone had expected, Ferrari clearly struggled more acutely than the rest.

“We have a very narrow window where we managed to make the tyres work,” Leclerc explained.

“Somehow it’s very difficult for us to always be in that particular window to make them work. And today, we clearly didn’t manage to put them in that window and we just really struggled, especially with degradation from lap five, six of every stint we struggled more than others.”

Leclerc was the first of the field to switch onto the hard tyres at the end of lap 15. This initially looked like an inspired call with the undercut effect proving so powerful that he was able to jump team mate Sainz and Daniel Ricciardo’s McLaren.

But between lap 18 and 53, Leclerc’s gap to Ricciardo sunk from a 1.878s advantage to a deficit of 44 seconds – and 10 places – by the time the chequered flag fell, after Ferrari resorted to bringing Leclerc in for a second set of mediums with 14 laps remaining.

“I personally knew and definitely the team knew that [the first stop] was quite early for a one-stop strategy,” said Leclerc.

“But we could still make it work if we managed those hard tyres very well. But we were quite surprised that after like six, seven laps, we started to struggle on that. And that’s where it became clearer and clearer that I will go for a two-stop.”

For Sainz, the biggest culprit for their slide down the field was their battle with graining front tyres.

“On Friday, we had numbers from our tyres from our long runs that had nothing to do with the numbers that we saw today,” Sainz explained.

“So for me, what caught us by surprise was the track condition changes that have been at the track since Friday until now and I actually heard a lot of other teams on the radio struggling on the first day with completely different balance, much lower grip. The biggest difference is that they didn’t struggle with graining and we did.”

Tyres had been a key topic of debate throughout the weekend following dual failures in Baku, with a new technical directive issued and mandatory minimum pressures raised. But Binotto believes this did not play a role in their troubles this weekend.

“No, I don’t think it had any impact,” claimed Binotto. “If I look at the prescriptions, it has been raised only on the rear, and I think that today we are having an issue at the front.”

With two races following in quick succession in Austria over the coming weekends, and plenty more front-limited circuits ahead, Ferrari urgently need to get on top of the problem. But Binotto admits it may be impossible for them to fully fix it this year.

“I think we may improve the situation but to solve it I think we will need some hardware change like, for example, the rims, which is not possible per regulation.

“It’s more important for us at that stage to really try to understand and to address it definitely for next year. In the meanwhile I think this issue may happen again on some races, but not all the tracks, it is somehow quite track and weather conditions-related.

“But we need to prepare ourselves to face such a situation in the future, and at least try to mitigate the problem since [it] will happen again this year.”