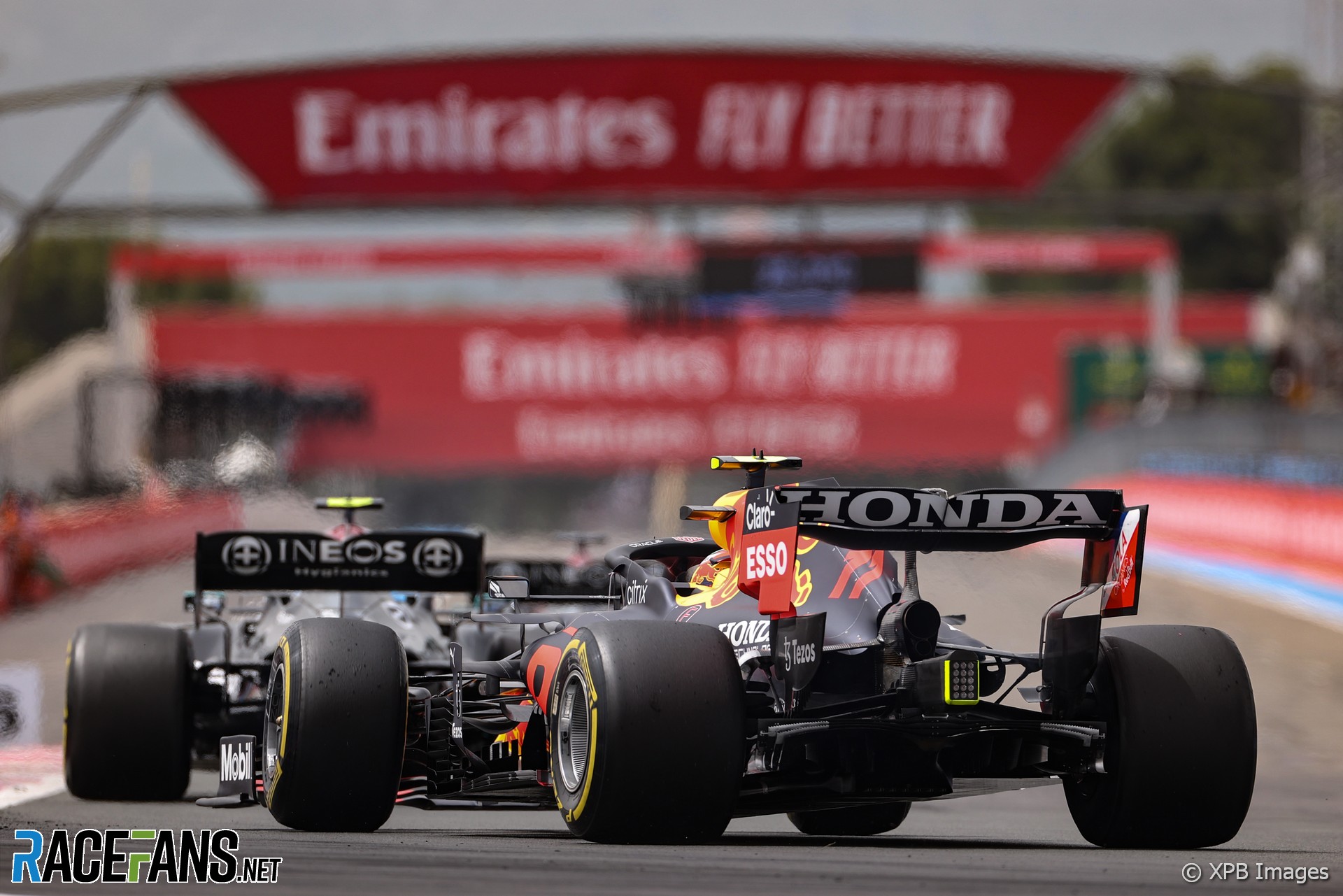 After Valtteri Bottas lost third place to Sergio Perez with four laps to go in the French Grand Prix, Mercedes had an opportunity to bag a bonus point for fastest lap.

With a 45-second gap to Lando Norris behind, the team could easily afford to bring Bottas in, fit a fresh set of tyres and ensure he bagged the bonus point for fastest lap.

However the team chose not to. As Bottas explained afterwards, this was because they were hoping he would get his third place back.

When Sergio Perez passed Bottas, he put all four wheels wide at the exit of Signes. The stewards announced they would investigate whether he’d gained an advantage while passing Bottas.

“We thought maybe Sergio was going to get penalty for overtaking off of the track,” said Bottas when asked why he hadn’t pitted to take a fresh set of tyres at that point.

As far as Perez was concerned, the fact he’d gone off-track made no difference to his move on Bottas. “I went around him into turn 10 [Signes],” he explained. “I was already ahead but I tried to give him as much room as possible. That meant I went off the track.

“I came back and basically I had no advantage because the move was already done. It was mainly done to give him room and avoid any possible contact at that point.”

After looking at the incident, the stewards quickly decided to take no action against the Red Bull drivers. “The stewards determined that Perez had fully completed the pass on Bottas by the time he left the track at turn 10,” they stated. “This made the fact that he left the track subsequently as a standard ‘track limits’ question.

“The stewards determined that Perez lost sufficient ground in the following turn that he could not be deemed to have ‘gained a lasting advantage.'”

On the face of it Mercedes had some cause to feel optimistic about their chances of getting the place back. Perez’s move had the hallmarks of Max Verstappen’s late-race pass on Lewis Hamilton in Bahrain, though on a considerably quicker corner. On that occasion, Verstappen had to surrender the place he gained.

However the stewards concluded the two incidents were dissimilar, as FIA race director Michael Masi explained.

“The stewards deemed that the overtaking manoeuvre had actually been completed firstly before Sergio left the track,” said Masi. “Once he did leave the track, the stewards also deemed that he gave back any lasting advantage immediately. So accordingly, they found that no further action was required in that circumstance.

“If we look at it, probably comparing it to the incident in Bahrain earlier in the year, where Max, on the other hand, actually overtook another car off the track which was Lewis at the time, and that’s why it was deemed that he had to give the position back. So two very different circumstances when trying to compare those two incidents.”

Masi said another incident involving Pierre Gasly and Lando Norris, in which the McLaren driver strenuously complained about his rival forcing him wide, was considered the team.

“The overtaking manoeuvre was well and truly completed by that point [when Gasly left the track]. So therefore any advantage that was gained given up and accordingly, it wasn’t warranted to be referred to the stewards. It was very similar to Checo’s.”