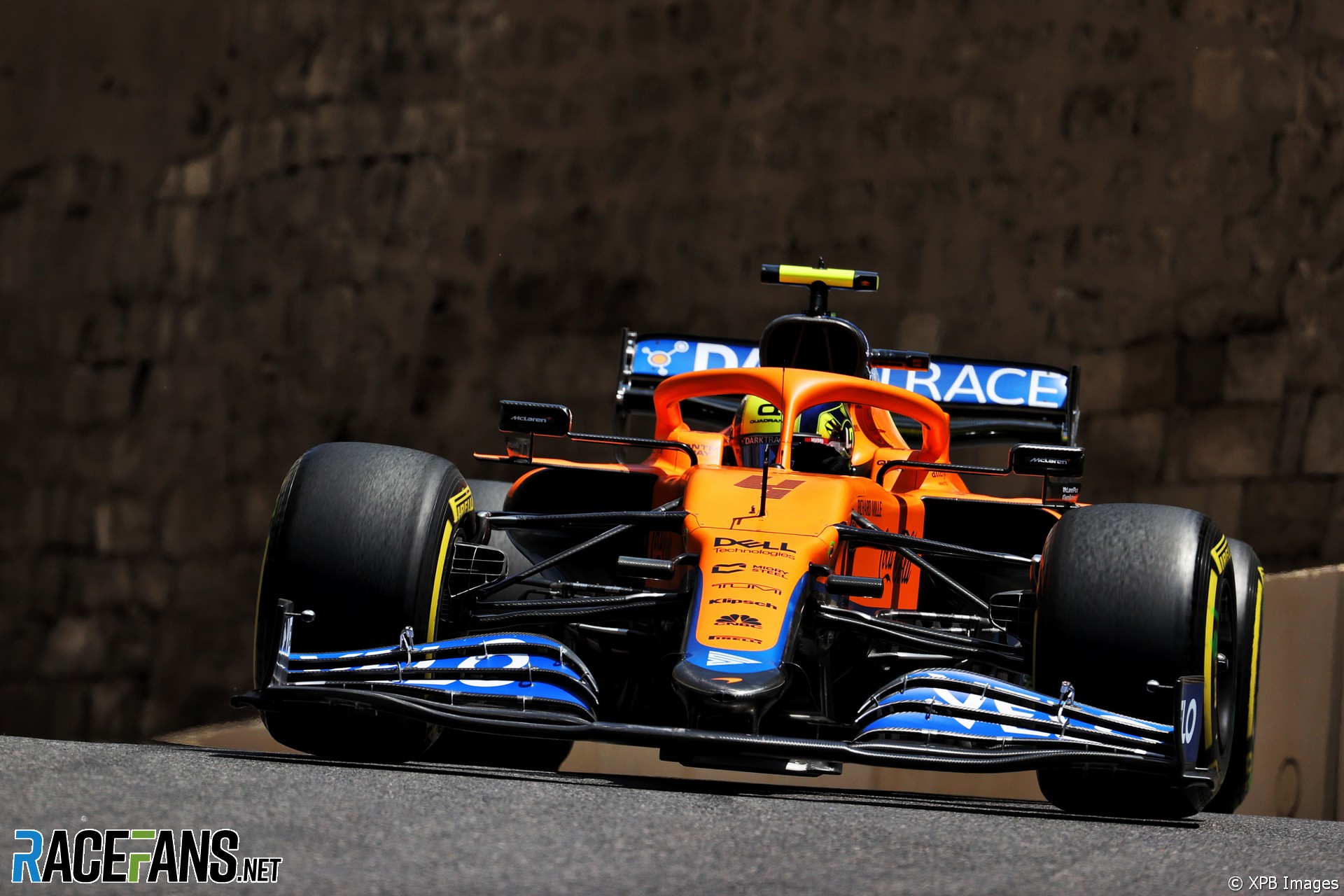 The stewards have given Lando Norris a three-place penalty for the Azerbaijan Grand Prix after ruling he failed to pit when the red flag was shown.

The McLaren driver will therefore fall from sixth place on the grid to ninth for tomorrow’s race. He has also been given three penalty points on his licence, putting him on a total of eight, four away from an automatic one-race ban.

Norris was investigated for failing to pit immediately after red flags were shown when Antonio Giovinazzi crashed during Q1. It was the second time the first round of qualifying was red-flagged.

The McLaren driver was approaching the pit lane entrance at speed when the session was red-flagged. Norris appeared to hesitate over whether he should come in, and straddled the dotted line which indicates where the pit lane entry line begins, before deciding to stay out.

“Should I box or continue?” he asked his team. “If you can, box,” came the reply, though Norris has already committed to staying out. “I can’t, I’m too late,” he said.

The stewards ruled Norris did commit an infraction by failing to pit immediately, but took into consideration the limited amount of time he had to respond, and reduced the penalty from a typical five-place sanction.

“[Norris] was just on the long start-finish-straight when red flags were displayed,” they explained. “Consequently, red lights were flashing on a panel on the left guardrail and on the car’s dashboard.

“During the hearing the driver admitted that he lifted the throttle, braked and was committed to and able to enter the pit lane. At that moment he was not sure what to do and asked his team over the radio.

“Although the team ordered him immediately to enter the pits, it was too late and Norris crossed the finish line one more time.

“The stewards assume that if a red flag is not respected during qualifying, a drop of five grid positions is appropriate. However, if you consider that the driver only had a very short time to react due to his position on the track, a drop of three grid positions is sufficient as an exception.”

Speaking before the decision was issued, Norris explained his reaction when the red flag was shown: “I was in the middle, I was continuing my lap but then I didn’t really know at one point I could turn left or go right,” he said. “I slowed down straight away, I don’t feel like I was doing anything wrong. And I was going at quite a high speed, going into that pit at that time.

“So I don’t know, I need to speak to the team, but I don’t think I’ve done anything wrong.”