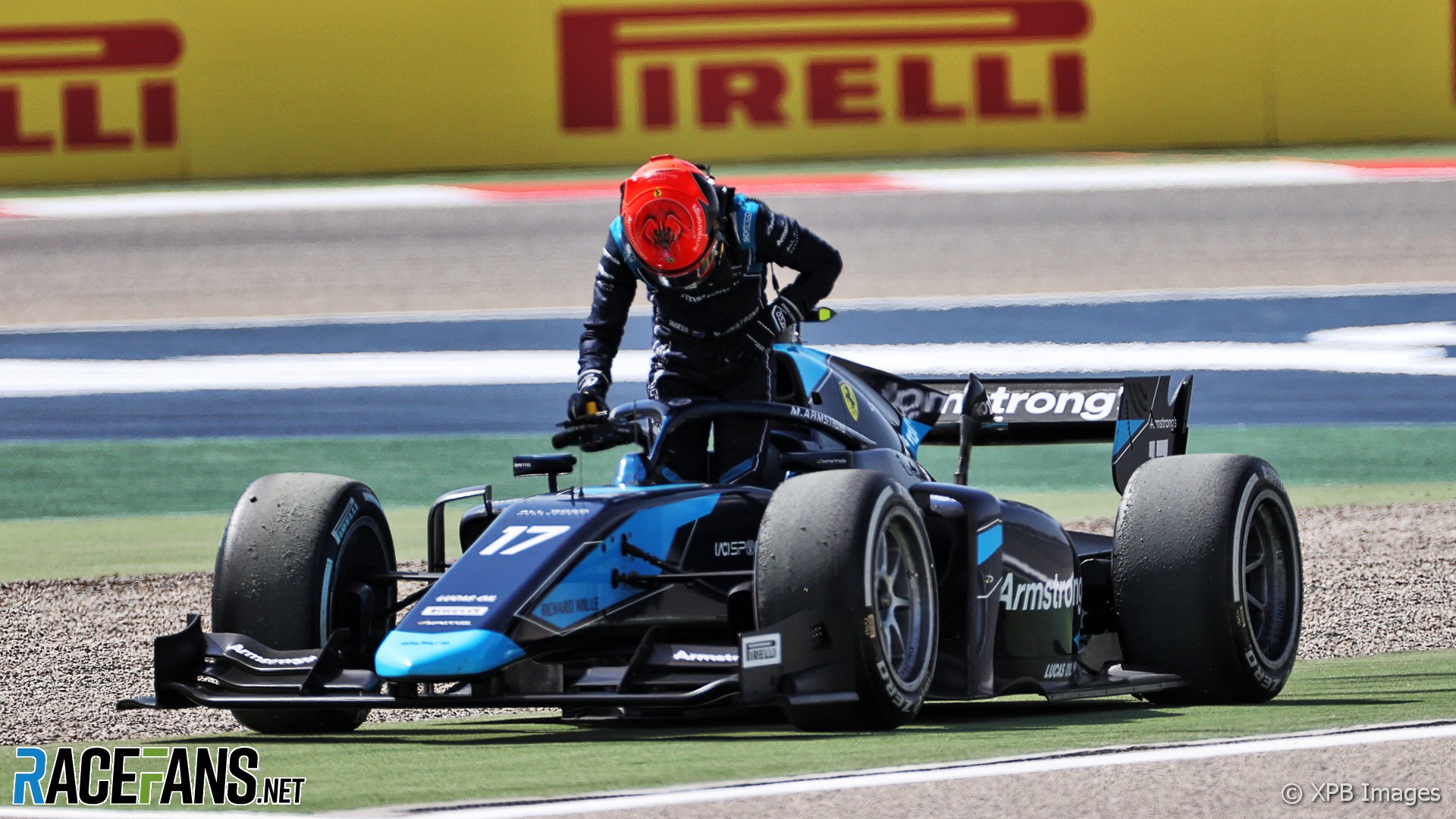 Formula 2 debuted its new weekend format in Bahrain, with two 45-minute sprint races on Saturday instead of the usual hour-long feature race which has now been moved to Sunday.

The top 10 from qualifying had to start in reverse order for the first sprint race, with those in 11th to 22nd starting where they qualified. The actual results of qualifying were still used for the feature race as in previous years, but now just a day later.

A reversed grid was also used for the second sprint race, but in another change the top 10 finishers from the first race were flipped, rather than the top eight, to set the starting order. It wasn’t the easiest format to understand for new fans, particularly as penalties and appeals after Friday’s qualifying session meant it wasn’t clear who would be on pole for the season’s first race until Saturday morning.

The move to an expanded three-race format for 2021 has been made as part of a plan to make the series more cost effective. As last year the championship features 24 races, but they are spread across just eight weekends instead of 12.

Drivers and teams had said before the weekend that they would need to be cautious in race one, given there would be less than six hours before race two to do any repairs if involved in a crash. Perhaps unsurprisingly, the action on track was utterly bland as cars followed each other around in a DRS train. Some drivers also reported overheating of car components in the wake of those ahead, such as their turbochargers, and had to escape the slipstream to cool down the car in the seating heat of the Bahrain afternoon.

High temperatures previously affected the three-day pre-season test at the circuit too, with teams spending hours in the pits while test sessions were live as they waited for the track to cool.

Saturday afternoon’s second sprint race was a livelier affair, as the caution of race one was thrown out of the window by drivers, knowing the race two result would have no impact on their starting place for Sunday. That made for spectacular action with faster drivers starting further back and on different tyre compounds. The victory battle was decided by a three-way fight into turn one on the final lap.

Holding the race at night, which drivers had not run in during testing, added an unknown as teams didn’t know how Pirelli’s modified version of the hard tyre for 2021 would perform in the cooler conditions. In the end the new format proved it could provide top-class entertainment.

It’s reasonable to expect some drivers to start getting more cautious in race two as half of this year’s rounds take place on street circuits, but several of the expected title contenders are already on the back foot and they will have no choice but to fight for every point.

Over-ambitious passes on Bahrain’s sandy track surface contributed to a few of the retirements, the type of action that would have happened regardless of the format change. But the fact remained that F2’s new look failed to mask its familiar shortcomings: namely unreliability and sometimes inconsistent penalty calls.

In race one there were three retirements attributable to mechanical fault. The engine in Marcus Armstrong’s DAMS car failed and took out Campos’s Ralph Boschung as he rear ended Armstrong just as he lost drive, and ART rookie Theo Pourchaire also lost power.

HWA’s Alessio Deledda stopped on track in race two, and the victory hopes of Hitech driver Juri Vips ended when his car stopped downshifting. Given how little mileage was put onto components in testing by those two in particular, it did raise more reliability questions.

It was an especially frustrating weekend for the Red Bull junior team member. “It’s been almost laughable” he reflected after being removed from the results of qualifying for a technical discrepancy unrelated to his performance.

Sunday’s feature race was nine laps longer than the sprint and encouragingly there were no engine or gearbox failures this time, but Gianluca Petecof had to park up early after the fire extinguisher went off in his Campos car. It’s a failure that has been described previously as being a one-in-a-million fault, yet since the introduction of the current F2 2018 chassis it has occurred multiple times.

In 2020 there were frequent reliability issues through the season that seemed to trace back to the parts’ suppliers rather than the teams using them, and series CEO Bruno Michel admitted it did “reflect badly” on F2. Pre-season this year he said the series’ new format would “help to improve reliability and safety”, but the weekend didn’t really follow that script.

Vips’ poor luck included several penalties and a subsequently withdrawn appeal by his Hitech team over the minor technical infringement in qualifying which meant the race one grid was settled only hours before the race. As qualifying also decided the feature race grid, Vips misfortunate was doubled, and he had to start from last place twice.

In addition to his gearbox problem, Vips was handed a five-second penalty for a Virtual Safety Car infringement in race two and then again in race three. While these penalties appeared to be by-the-book, the response to other incidents, particularly the various moments of contact across the weekend left room for improvement.

Three near-identical offences of contact at turn one by different drivers resulted in calls of ‘no further action’, a five-second penalty and a 10-second penalty were the decisions made.

Differences in interpretations of incident are one thing, but the handling of a penalty issued to ART’s Christian Lundgaard was especially disappointing. Race control overlooked the fact he had served his 10s penalty in the pits on his way to second place in the Saturday night sprint race. The extra time was incorrectly added to his race result, relegating him to ninth place, and Lundgaard was incorrectly prevented from taking to the podium.

It was only a few hours later that they admitted that they had not been able to verify what Lundgaard had done in the race and as a result promoted him back to second place. It left teams unhappy, fans confused and Alpine Academy director Mia Sharizman unimpressed – Lundgaard and fellow Alpine juniors Oscar Piastri and Guanyu Zhou’s thrilling final-lap battle for the win was also under investigation for a separate incident at the time of the podium ceremony.

Zhou’s win in the feature race a day later felt like a suitable crescendo to the weekend and a fitting lead-up to the grand prix. Moving F2’s main event to the same day as the grand prix was a clear upside of the new format. In other respects, it served only to distract from the same problems F2 has had for the last few years.