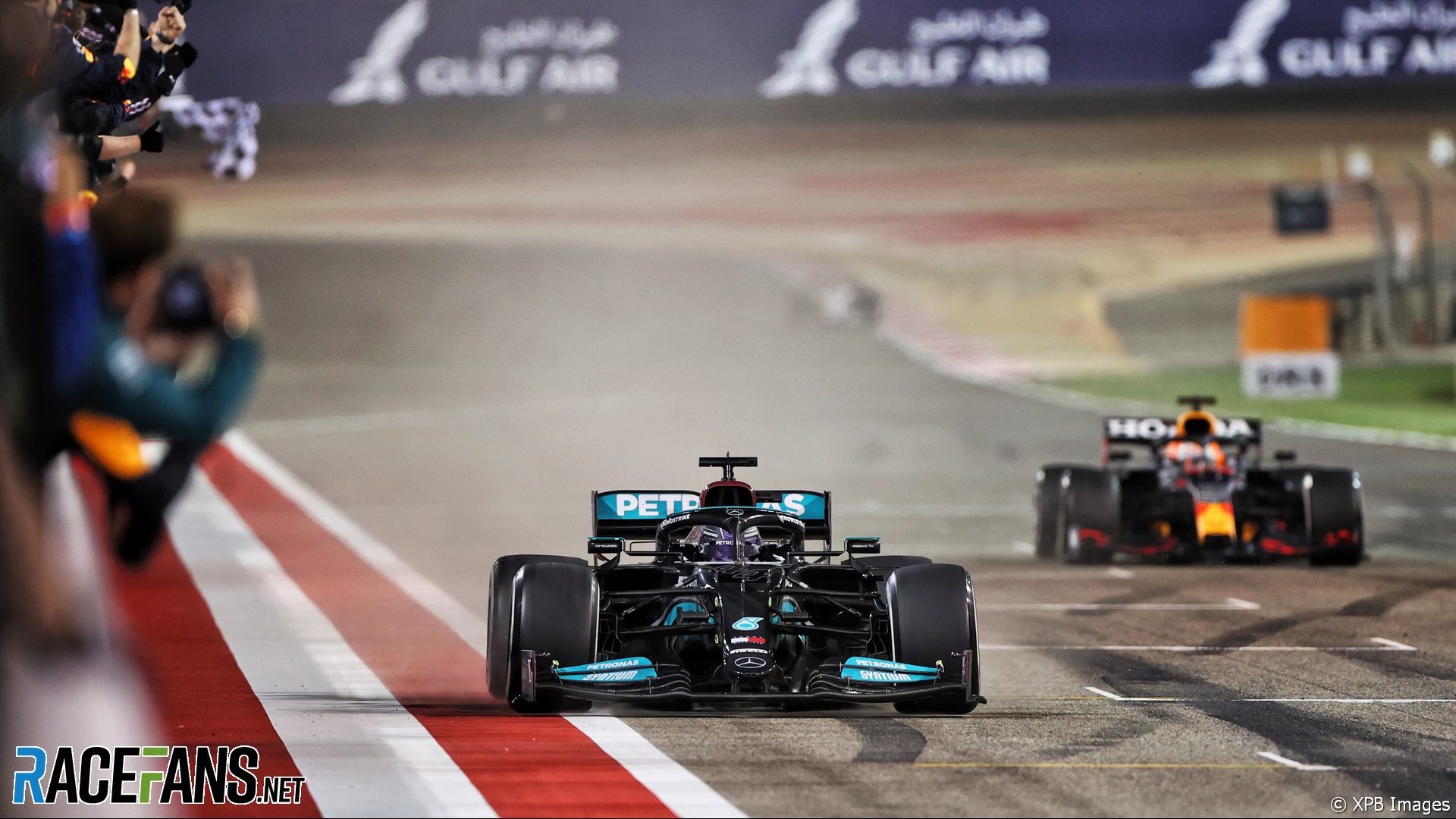 Lewis Hamilton prevailed in a thrilling scrap with Max Verstappen to win the first race of the 2021 season in Bahrain.

The Mercedes driver came under attack from Verstappen in the closing laps, and briefly lost his lead, but regained it when his Red Bull rival ceded position after running wide.

Verstappen held his lead from pole position at the start, but fell behind Hamilton during the first round of pit stops. The Mercedes driver was the first of the two to pit, and Red Bull left Verstappen out four laps longer as they realised Hamilton’s early stop had ensured they couldn’t bring Verstappen in and maintain their advantage.

Red Bull therefore committed to shadowing Hamilton’s pit stops, which by the end of the race brought Verstappen within range of the Mercedes. Hamilton ran wide at turn 10 with five laps to go, bringing Verstappen onto his tail.

Verstappen got around the outside of Hamilton at turn four on lap 53, but had all four wheels off the track as he completed the pass. Exiting turn 10, Verstappen handed the place back to Hamilton, and the fight continued. But a few corners later he made an error of his own, giving Hamilton vital breathing space.

Hamilton won the sprint to the chequered flag, taking his first victory in a season-opening race since 2015, with a triumph which looked unlikely when Verstappen took an emphatic pole position on Saturday.

Valtteri Bottas collected third place after slipping behind Charles Leclerc at the start of the race, then re-passing the Ferrari. He lost a significant amount of time mid-race with a slow pit stop.

Leclerc lost two more places by the end of the race, including to Lando Norris, who took fourth. Sergio Perez claimed an excelled fifth on his debut for Red Bull, despite starting from the pits after his car came to a stop on the formation lap.

Daniel Ricciardo took seventh place in his first place for McLaren, followed home by Carlos Sainz Jnr in his debut as a Ferrari driver.

Yuki Tsunoda scored two points for ninth place on his F1 debut, while Lance Stroll ensured Aston Martin claimed a point in their first F1 race for 61 years. His team mate Sebastian Vettel endured a poor race, colliding with Esteban Ocon on his way to 15th. Ocon came in 13th behind the Alfa Romeo pair.

There were no points for Alpine in their first race, as Fernando Alonso was forced out when a brake duct ingested debris and overheated. He had already been coping with an escalating problem with his power unit.

Haas got one of their rookie drivers to the finish, Mick Schumacher the last driver running in 16th place, but Nikita Mazepin crashed out on the first lap.