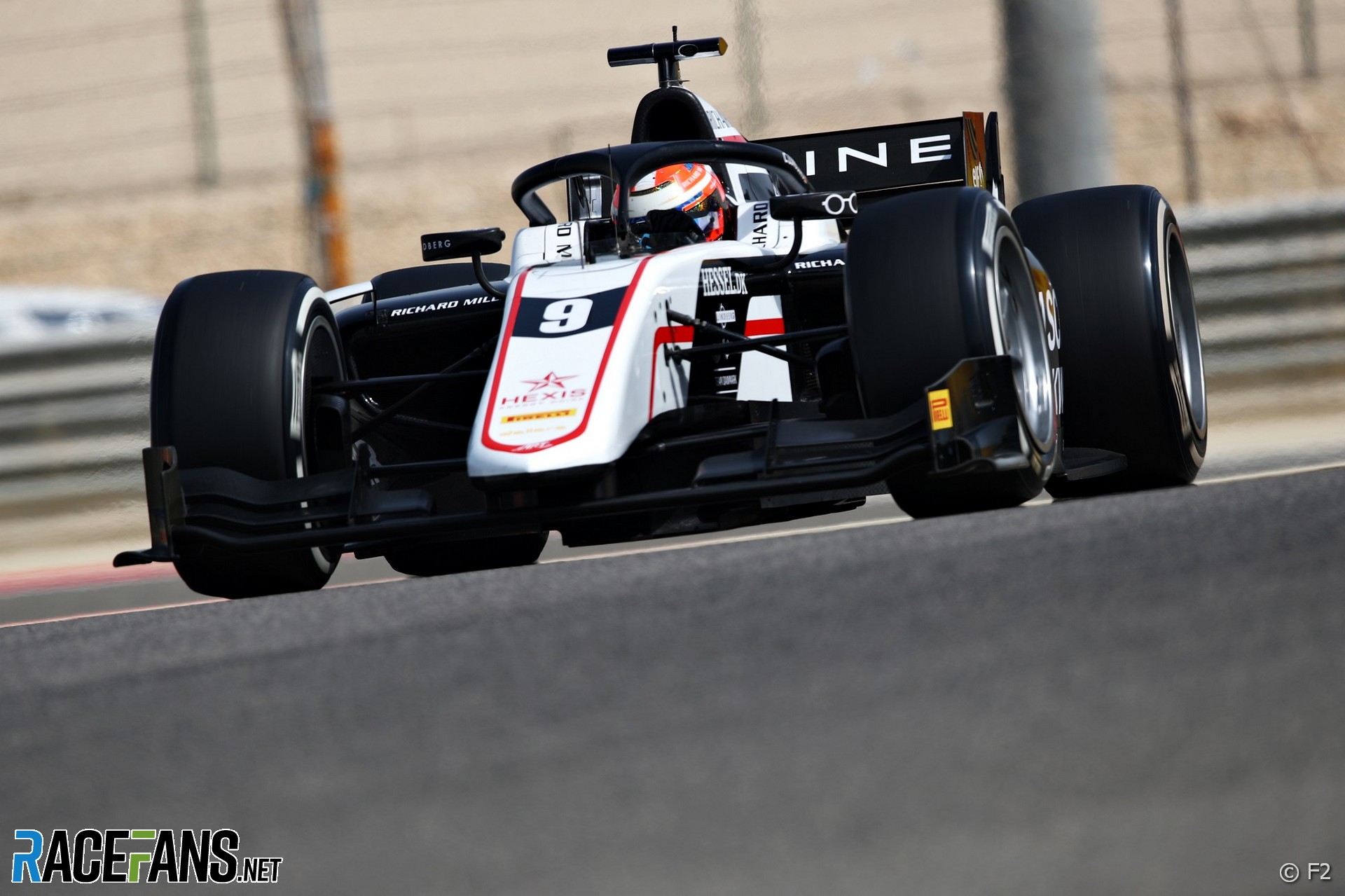 Formula 1’s top feeder series joins the grand prix in Bahrain this weekend for its first round with a three-race weekend and exciting new rookie talent.

Formula 2 has a new weekend format this year, with more races but fewer overall events. The change has been made, in theory, to bring down costs for participation, which have spiralled to several million Euros per season and provoked criticism from some teams and drivers over reliability issues with the series’ spec car.

The complete format is somewhat arcane. The 45-minute practice session and 30-minute qualifying sessions on Friday are as they were last year.

On Sunday, the feature race (one hour) will run using the grid order originally determined by Friday’s qualifying session. The feature race, determined as the main event, will be eligible for more points than either sprint race, using the same points allocation for the top 10 as F1 does, while points for each sprint race will only be awarded to the top eight finishers.

Who to watch for

Mick Schumacher, Yuki Tsunoda and Nikita Mazepin have graduated to F1, and Callum Ilott hasn’t returned, leaving Robert Shwartzman the only driver from last year’s championship top five to return to the series. The Ferrari-backed driver is up against some strong competition however, notably from Alpine-Backed Guanyu Zhou and Christian Lundgaard. The rookie crop also features from promising arrivals from F3.

Shwartzman has to be rated highly as a title contender. An appalling run of luck undid his title bid last year, and the 2019 F3 champion is undoubtedly quick. The same is true of his new team mate, 2020 F3 champion Oscar Piastri, another from the Alpine stable who will be an exciting reference against Shwartzman.

Race winners Zhou and Lundgaard, plus Dan Ticktum, Jehan Daruvala and Felipe Drugovich have also stayed on from the previous season. For several of them, this is a make-or-break year as they scrabble to maintain or gain places in junior programmes.

The stakes may be highest for Marcus Armstrong, whose 2020 was characterised by shocking reliability problems which saw him finish 13th. A move to DAMS for 2021 should see him more able to compete with fellow Ferrari junior Shwartzman.

F2’s youngest driver this year is Theo Pouchaire, second in F3 last year. He doesn’t quite count as a rookie in the purest sense, having raced at the final rounds last season (much as was the case with Lando Norris in 2018) where the French teenager struggled with a very uncompetitive HWA car but should be better-placed with ART this year. Similarly, last year Red Bull’s Juri Vips did a substitute stint at DAMS (in for injured Sean Gelael) where he earned a podium – and a full time drive this season with race-winning squad Hitech.

The 2021 F2 season is a mix of street circuits and high speed tracks. Or, in the case of the new Jeddah circuit which will host the penultimate triple-header round, a high-speed street circuit.

The F2 cars won’t be seen at several European venues which previously made up the bulk of its mid-season: Red Bull Ring, Hungaroring, Catalunya and even Spa. Half of the championship now consists of races on street circuits.

It will also no longer share race weekends with F3 in another move intended to reduce teams’ budgets. There’s considerable debate about whether that’s worked, as well as the fact it has allowed drivers with the (sizeable) budget to do so to run in both series. Matteo Nannini is the only driver so far to take up the opportunity, driving for HWA in both championships, following an 18th-place F3 finish for Jenzer last year.

The race-sharing arrangement has left F2 with a distinctly uneven calendar. After opening its championship in Bahrain this weekend it will take a two-month break until Monaco in May and then a relatively rapid turnaround to Baku in early June before another break of more than a month until Silverstone. They’ll then be at Monza, Sochi (which is a sometimes hair-raising but competitive venue for F2, compared to F1) before rejoining at the penultimate rounds in Saudi Arabia and Abu Dhabi.

With the racing now concentrated to a smaller number of weekends, there’s pressure on the young drivers to make each count – and a risk, if issues with acquiring spare parts from last year continue, that mechanical problems could once again play a significant role in the title fight.

Hopefully, as its in motorsport as a whole’s interests that the premier junior series is fair, even if you decide not to watch it, the bigger breaks in the calendar will work to mitigate those problems and provide a level playing field.