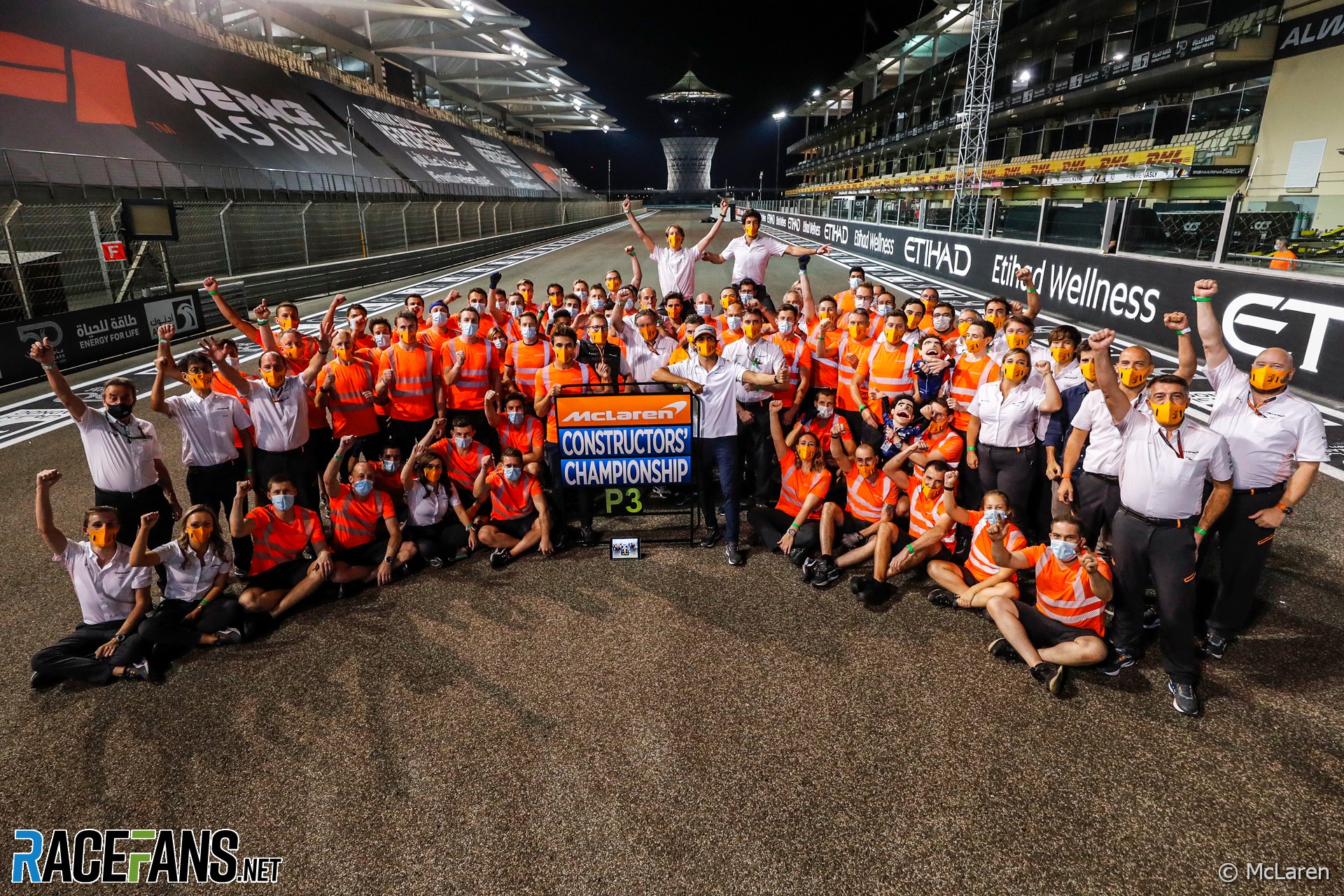 McLaren prevailed in a closely-fought fight for third place in the constructors championship in 2020, achieving their best finishing position for eight years.

Can they repeat it in 2021? McLaren Racing CEO Zak Brown predicts the midfield will again be very close, with as many as five teams in the fight for third place.

“I think third to seventh place is a flip of a coin,” he told RaceFans in an exclusive interview.

McLaren ended last season just seven points ahead of Racing Point, with Renault a further 14 behind. Those teams will change names to Aston Martin and Alpine respectively this season. Brown expects they will be McLaren’s closest rivals for third place, along with Ferrari and AlphaTauri.

“Any of those third-through-seventh-placed teams took a turn at being the third fastest at some point last year,” he explained. “So that’s how tight it is.

“Every team is capable of being third quickest and it’s about driver line-up consistency, putting it all together. I think you’ve got to assume that, third to seventh, anyone can do it.”

“I think with Ferrari’s resources and driver line-up, if you look at where [Charles] Leclerc finished in the championship, if they would have had more consistency out of their second driver and some more pace, I don’t think they would have finished sixth in the championship. So therefore, are they a threat for third with their resources? Absolutely.”

Brown saw the same weakness in Racing Point, who McLaren overtook for third place at the final round.

“I think Racing Point was the third-quickest car most of the year,” he said. “But again, you didn’t have two drivers driving at the same level all the time.”

Brown considers the team potentially even more competitive following its rebranding as Aston Martin and hiring of Sebastian Vettel following his departure from Ferrari.

“Vettel is a four-time world champion who clearly has it in him. Ferrari wasn’t a great environment for him, for whatever reason, and so you have to assume [that] get into an environment he’s happy with [and] he’s fully capable of taking over where Checo [Perez] left off.

“Given the 2021 car doesn’t deviate much from the 2020 car, you’d have to say that’s probably still the third-quickest car. So therefore, I don’t think you can rule them out for third.”

“Renault took turns being third quickest,” said Brown. “I think Fernando Alonso is as fast as he ever has been. So I think he’ll be right at the top.

“While [Esteban] Ocon clearly struggled the first half of the year, you’ve got to say that in the second half of the year and the last quarter of the year he was right there with Daniel. So I think that’s a tough driver line-up, with a team that’s moving forward, so you can’t rule them out for third.”

Although AlphaTauri finished last year with only slightly more than half McLaren’s points total, Brown also sees them as potential contenders in 2021.

“I think you’ve got to put AlphaTauri in there. They won a race, they lacked some driver consistency. I don’t know much about [Yuki Tsunoda], but from what I read, he seems to be extremely good. [Pierre] Gasly has always been good in the AlphaTauri, so I don’t think you can rule them out.”

Ricciardo will join McLaren in place of Ferrari-bound Sainz this year. “I like our collective driver line-up the most of all the driver line-ups,” said Brown. “But I don’t think there’s a tenth or two between those cars and therefore I think it’s going to be a hell of a battle between third and seventh.”

“The reason we finished third in the championship this year is a great team effort, good car, et cetera,” he added. “But you have to [credit] the fact that we’ve got two drivers that were so close to each other made a difference.”

McLaren are also switching to Mercedes power this year, forcing the team to spend chassis tokens on accommodating the new power unit rather than pure development. “We’ve got the benefit of the Mercedes engine but that comes to the detriment of having to use our our tokens,” Brown acknowledged, “so does that neutralise itself in the short term? I don’t know. We’ll find out.

“So therefore, I think we’ve got a shot. But we weren’t the third quickest car. We were the fourth quickest car.”

However Brown also has his eye on the true benchmark of the team’s performance: Its gap to Mercedes, which narrowed during 2020.

“Where you finish in the constructors championship is one measurement,” he said. “It’s a big measurement. But the ultimate measurement is lap time.

“One could argue our race car could have been just as fast and we could have finished fifth instead of third because of good luck or bad luck. So those are the two data points: Constructors championship, and race pace and qualifying pace to whoever is winning. And we closed the gap, but the gap is still huge.”