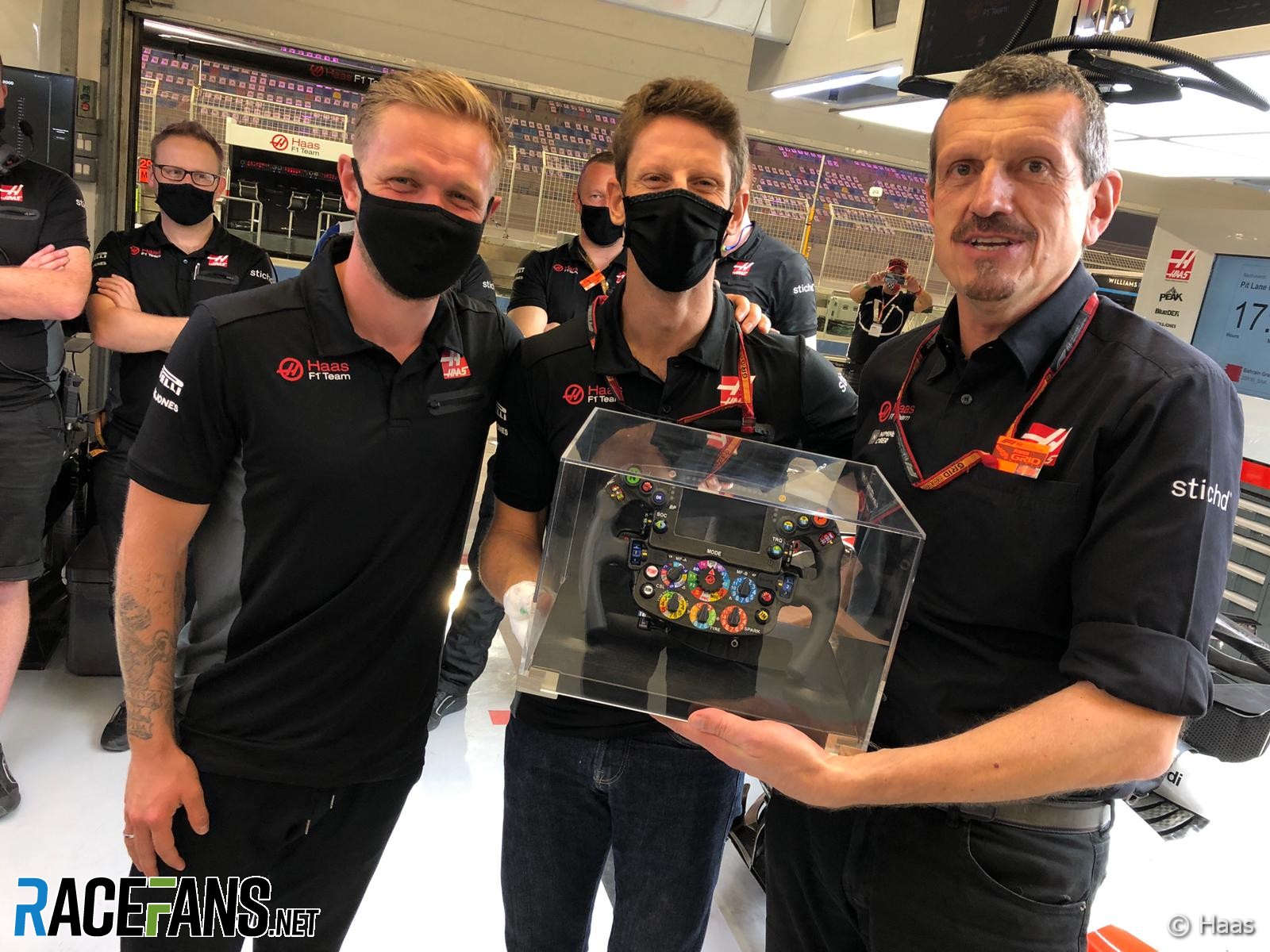 In the round-up: Haas F1 team principal Guenther Steiner has said he wanted to give his departing drivers presents that wouldn’t end up in their garages.

[mpuautocourse20b]The Haas F1 team gifted Romain Grosjean and Kevin Magnussen F1 steering wheels to mark their parting of ways, which Steiner said was both intended as a rare, more meaningful gift and was something that Magnussen had asked for in the past:

I wanted to give them as present which is not cheap because they get a lot of presents and they put them somewhere in the garage and leave them there and then in five years’ time, when they’re cleaning the garage, they throw them in the garbage, you know what normally happens with stupid presents.

So I know that when you get a steering wheel, you respect that because they are very difficult to get.

It was just organised at the last minute and with Kevin, it was strange that, I think it was the first race in Bahrain, we just got chatting and he said ‘Guenther, I just would like one thing, you know’ and I said ‘what?’ ‘A steering wheel.’ I knew that I had one, I knew that because he asked me before, he always wanted one.

🗣️ Franz Tost "As Yuki will drive for us next year, we say goodbye to @kvyatofficial, I want to thank Daniil very much for his input to the team, especially this year, he helped us a lot with his experience to set up and improve the performance of the car." pic.twitter.com/N6sN9IxFgz

💬 A message to our friends at @ScuderiaFerrari and to the famous tifosi.

I know you guys have seen this photo for few times already but please let me post it again.
To my best friend, you deserve that seat more than anyone.
For sure it won’t be an easy challenge but wishing you all the best to you.
Congratulations and good luck🤞 pic.twitter.com/7MSDkiDojX

Disclaimer…
A. We thought the party poppers would travel further than this,
B. There are only about 6 of us in the factory so it was a mini celebration,
C. It’s the thought that counts!

"Flying Dutchman Jarno Opmeer stormed to two wins in the first event, setting himself as the de facto man to beat in 2020. He scored three victories across the first six races, making a streak of six podiums in a row in the process. His run was stopped in Event 3 however, where he was out-scored by his rivals. Nevertheless, another podium in the most recent race in Italy gives him great momentum as we look to the Grand Final."

"Next season's expanded schedule features 10 rounds running under the GT World Challenge Europe banner, including the marquee 24 Hours of Spa. The calendar was recently completed with the addition of a Sprint Cup round at Circuit Ricardo Tormo Valencia, which joins historic tracks such as Monza, Brands Hatch and the Nürburgring on the 2021 schedule."

"Using funds generated through its ‘€1 per racing kilometre’ initiative, plus significant donations from WTCR drivers, Eurosport Events has made considerable financial contributions to hospitals located close to each circuit hosting rounds of the WTCR in 2020."

" Former rally driver Wilberforce Pole Pole has died as a result of complications from Covid-19. Pole Pole was an active driver in the mid-2000s. He achieved his first career victory during Collines Milles Rally in Rwanda in 2016 with Joseph Bongole as his co-driver."

With Yuki Tsunoda’s confirmation at AlphaTauri just days after the Abu Dhabi Grand Prix, John H wonders if it couldn’t have been made official earlier to give Daniil Kvyat a clearer send-off from the team he’s spent most of his career with:

I think they told him shortly before the race weekend, because reading up on this Kvyat mentioned that they wanted Tsunoda to replace him in the post race interviews.

With that in mind, I’m not sure why AlphaTauri couldn’t have announced it before the race to the press and at least have given him a send off.

I’ve listened to Kvyat’s team radio at the end of the race, and there is no mention of a thanks from the team, no send off, nothing. It’s kind of sad and pretty disrespectful in my opinion given his strong end to the season and the points he’s earnt the team.
@john-h