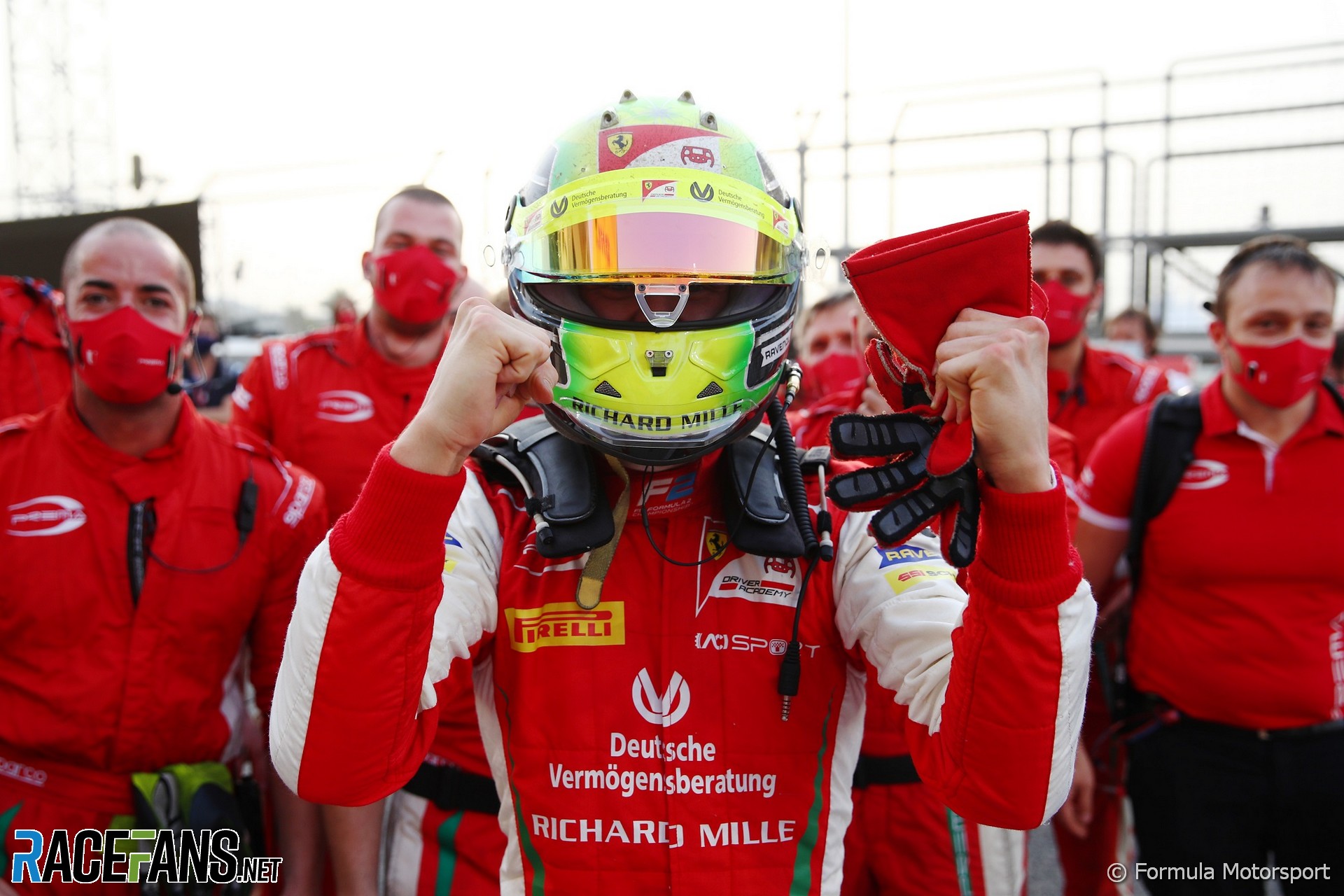 Mick Schumacher has won the Formula 2 championship, despite finishing 18th in the final race of the season.

The Prema driver flat-spotted a tyre on the first lap of the sprint race, which eventually forced him to make a pit stop, leaving him well outside the points. But as title rival Callum Ilott slipped to 10th at the flag, Schumacher clinched the crown by 14 points.

Going into the championship finale, Schumacher had a 14-point lead over Ilott, with a maximum of 17 points available for win and fastest lap.

The points lead swapped between Ilott and Robert Shwartzman early in the year. However Schumacher’s regular podium visits moved him into contention. A run of poor results for Shwartzman over the Silverstone and Barcelona races saw him slip down the order, as Schumacher ascended into the lead.

The two title rivals started the race alongside each other on the second row, Schumacher in third and Ilott fourth, behind Ticktum and Daruvala. Schumacher moved up to second at the start but locked up heavily at turn four and fell back into Daruvala’s clutches.

Schumacher’s deteriorating tyres allowed Daruvala to pass him back for second and by lap 17, Ilott was once again fighting him. For lap after lap Schumacher absorbed huge pressure from his title rival, and was still on course to seal the title if he could stay ahead for the remaining 32 laps.

But Ilott harassed Schumacher into further lock-ups until his tyres were too poorly damaged to hold on. Ilott dived to the inside with a brilliant pass at turn four, following which Schumacher lost more places, and finally pitted for fresh rubber.

Daruvala and Ticktum continued to battle for the lead, over five seconds ahead of Ilott. Despite repeated lockups, Ticktum was able to keep ahead until a turn one overtake put Daruvala in the lead on lap 25. A few of the very short corners on the Bahrain outer circuit later, Schumacher’s title hopes were bolstered as Yuki Tsunoda, who had started eighth, passed Ilott for third.

Ilott was also passed by team mate Guanyu Zhou and slipped back to fifth. Now seven seconds away from second place – the minimum he needed to beat Schumacher in the points – his title chances were realistically over. Tsunoda passed Ticktum on the penultimate lap for a Carlin one-two finish, Ticktum settling for third on ragged tyres.

Over the final laps Ilott continued to stumble down the order. He took the flag in 10th while Schumacher, 18th, became the new champion.

Schumacher finishes the year on 215 points, Ilott on 201 and Tsunoda has sealed third place in the standings on 200. Shwartzman finished fourth on 177 and Schumacher’s 2021 Haas team mate Nikita Mazepin fifth with 164.