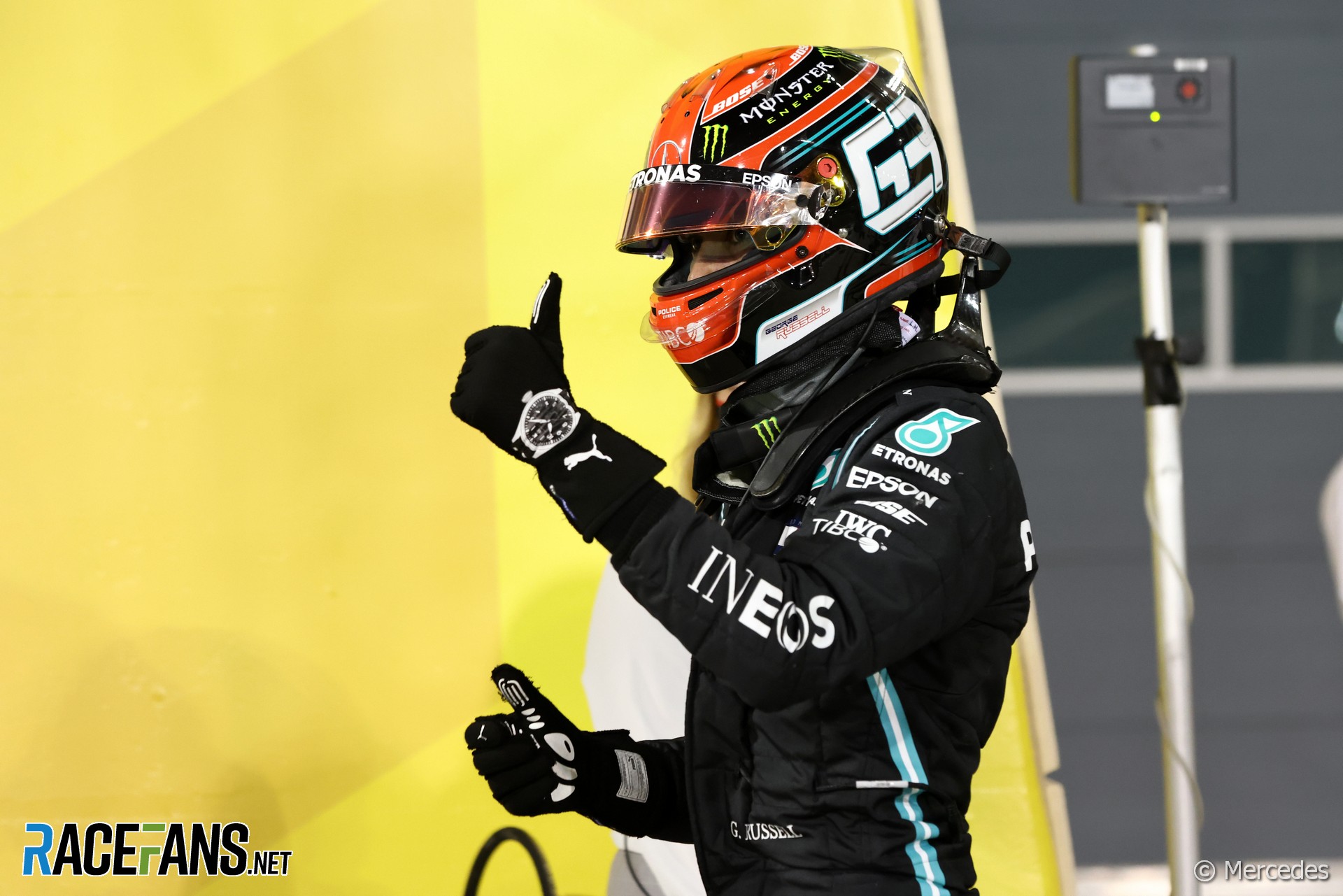 Mercedes team principal Toto Wolff is not concerned about potential rivalry between his drivers in today’s Sakhir Grand Prix, following George Russell’s arrival as a substitute.

Russell impressed the team by completing a front row lock-out for them in qualifying. Valtteri Bottas beat him to pole position by just two-hundredths of a second.

Wolff has made it clear the pair are “free to race” today. With Bottas already contracted to drive for the team again next year, and Lewis Hamilton expected to be confirmed as his team mate, Wolff played down any potential rivalry between Bottas and Russell.

“I don’t see any rivalry within our team,” he said. “Valtteri is well-settled. There’s nothing to prove for him.

“For George it’s a little bit easier because there is no pressure at all, he has nothing to lose.”

The pair relegated Max Verstappen to third on the grid. Wolff suspects the Red Bull driver will have an advantage over Russell at the start as he is starting on the cleaner side of the grid.

“Obviously Verstappen is not going to be happy that there is a new kid on the block that is standing in front of him.

“George is on the worst line, as we’ve seen last weekend. The cockpit is too small for him, the clutch pedal is too small too for his hands and his fingers. So really I have the same expectation tomorrow that I had for him for qualifying.”

While Wolff was quick to praise Russell after he took second on the grid, he insisted the team were not surprised by the performance of their reserve driver following his promotion from Williams this weekend.

“[We were] impressed but not surprised. His speed, what I saw last with him when we were able to benchmark him in F3 and F2, I have seen that in a Formula 1 car. And his calmness about approaching it, he wasn’t rattled at all. And just a really considered approach, I would say.”

“What is most impressive is the sheer driving,” Wolff added. “All the other things around were as expected. The driving was impressive.”

Russell will start his first race for the team today after winning a place on its junior driver programme in 2017. That came about after he made a direct pitch to Wolff.

“I remember when he walked into my office when he was 15 or 16 years old with a presentation in his hands and the black suit with a black tie and made the case why he should be with Mercedes in the future,” Wolff recalled.

“Now, having been thrown in the cold water, he is definitely swimming and not only swimming he’s not comfortable in the car it’s too small, it’s not his steering wheel. So I would say it’s more than solid, what he has delivered.”

24 comments on “Bottas has nothing to prove alongside “impressive” Russell, says Wolff”