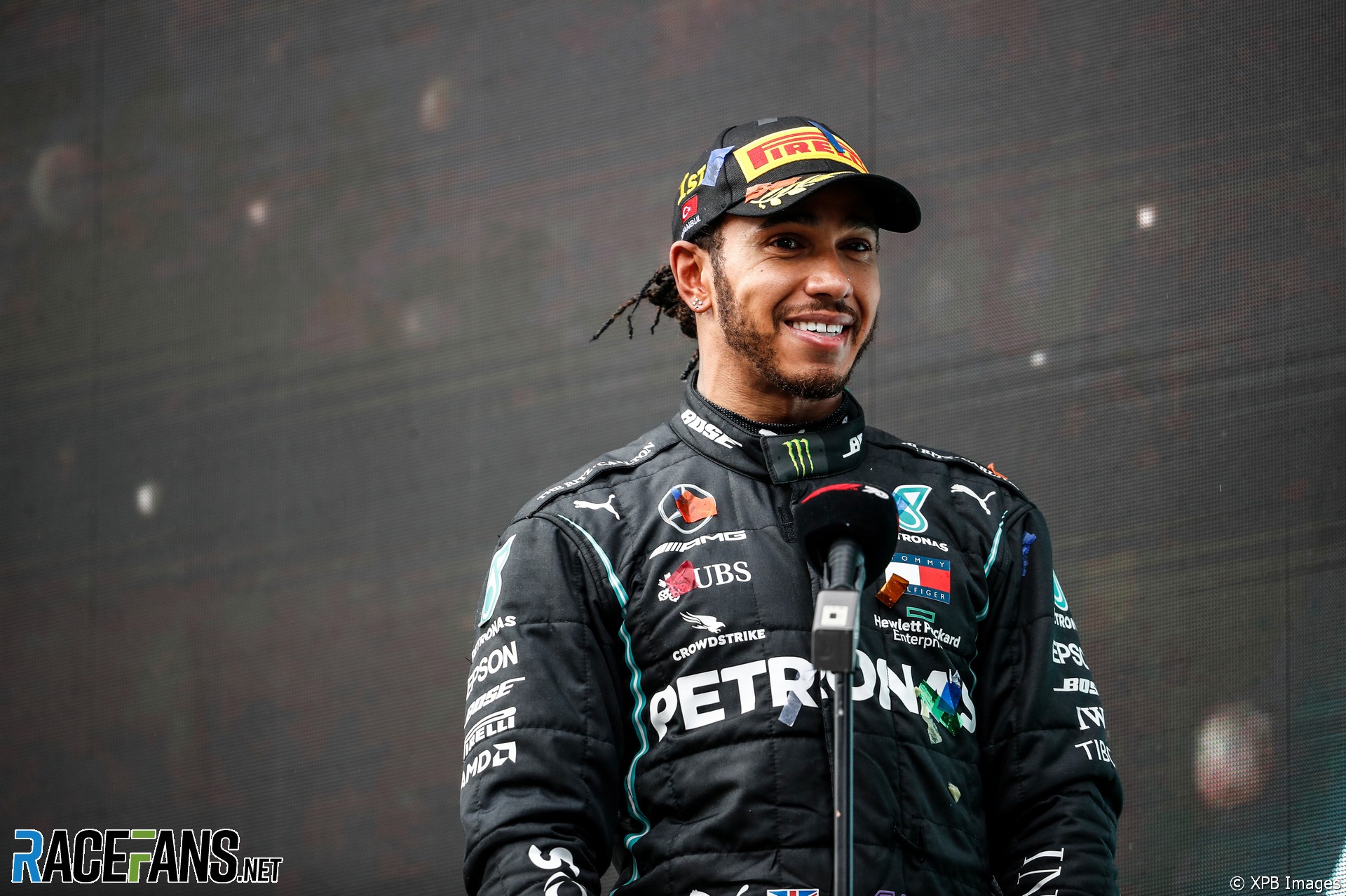 George Russell has been handed a massive opportunity by taking over Lewis Hamilton’s Mercedes for this weekend’s Sakhir Grand Prix.

Having traded one of the slowest cars in F1 this year for the quickest, Russell duly headed both of yesterday’s practice sessions.

Russell’s chance has been widely interpreted as a threat to Valtteri Bottas’s position, for obvious reasons. As Hamilton’s team mate of the past four seasons, Bottas is expected to show Russell the way this weekend. Anything less than a win for him on Sunday will be interpreted as a failure.

Mercedes have publicly indicated Bottas can rest easy in the knowledge that his position at the team for next year is not under threat. “We know that we race next year with Lewis and Valtteri,” team principal Toto Wolff insisted in yesterday’s FIA press conference.

But while Bottas has already signed on the line for the 2021 F1 season, Hamilton’s deal is not yet done. And, Wolff admitted, his Covid-19 diagnosis early in the week is only going to further delay negotiations which had already been pushed beyond the final race of the season.

“The timeline is being pushed back until he recovers,” said Wolff. “We know that we need to get it done, we’re pretty well aware both of us. But the priority now is him getting back on his feet and being back negative. And then we will meet, or Zoom, in order to put pen to paper.”

In the meantime Hamilton has to sit back and watch Russell drive his car for this weekend and quite possibly next weekend as well. (Although, as Wolff also indicated, Hamilton may not bother tuning in: “He has better things to do than watching a first practice session.”)

What Russell can do with the fastest car on the grid should be of obvious interest to Hamilton. He doesn’t even need to beat Bottas to impress Mercedes. He’s switched to a different and much larger team, at very short notice; he’s driving a car he’s never sat in before with a three-year-old seat and is wearing boots one size too small for his feet in order to cram into a footwell designed for Hamilton. Mercedes will take all this into consideration when evaluating his performance.

Wolff’s opposite number at Red Bull, Christian Horner, is certain Mercedes will use the opportunity not only to draw conclusions over Russell’s performance compared to Bottas – but also compared to Hamilton.

“It’s an enormous opportunity for him and one that I’m sure that he’s looking to make great use of,” said Horner. “It benchmarks him against Valtteri.

“I’m sure Toto’s looking to use it to perhaps negotiate Lewis’s contract in some way, shape or form.”

Horner, the longest-serving team principal in Formula 1 today, who has had stars like Sebastian Vettel and Max Verstappen on his books, knows the reality of how these deals are done.

Hamilton is a giga-star whose name is know far beyond Formula 1 as well as the most successful driver in its history. His value to Mercedes goes far beyond his ability to drive a car quickly.

The idea Russell could take is 2021 seat is not realistic. But Hamilton’s raw speed is part of his value. If Russell can readily prove Mercedes have another driver at hand who could be just as fast, as Horner indicates, that gives Wolff a lever to pull in his upcoming contract negotiation to lower Hamilton’s price.

Even if that does come to pass, the next deal for the sport’s biggest earner is likely to be eye-watering. At 35 years old, and openly talking about only racing for a few more seasons, this could be the last big payday of Hamilton’s career. Even if he does race on into his forties, it is likely to be his last deal before restrictions on how much teams can pay their drivers come into force.

Naturally, Wolff denied any linkage between Hamilton’s contract and Russell’s role as his substitute when asked by RaceFans yesterday. “We’ve discussed having George in the car. We know what we have with Lewis and he knows what he has with the team.

“Such a situation would never be utilised as some kind of bargaining power, neither by him, nor by us – it could do both directions. I respect very much who he is, how he drives, his records, and whatever happens this week or next has no influence on our talks.”

Wolff was also eager to cool the hype which greeted Russell’s session-topping time at the start of practice yesterday. “We need to calm everybody down because it was a first session on a new and short circuit,” he said.

But what if Russell produces the goods over the next two days, and possibly next weekend? Wolff’s characterisation of his performance will surely be rather more enthusiastic when he and Hamilton finally meet over Zoom, pizza and red wine to discuss how much Mercedes will pay the world’s best and most famous racing driver.