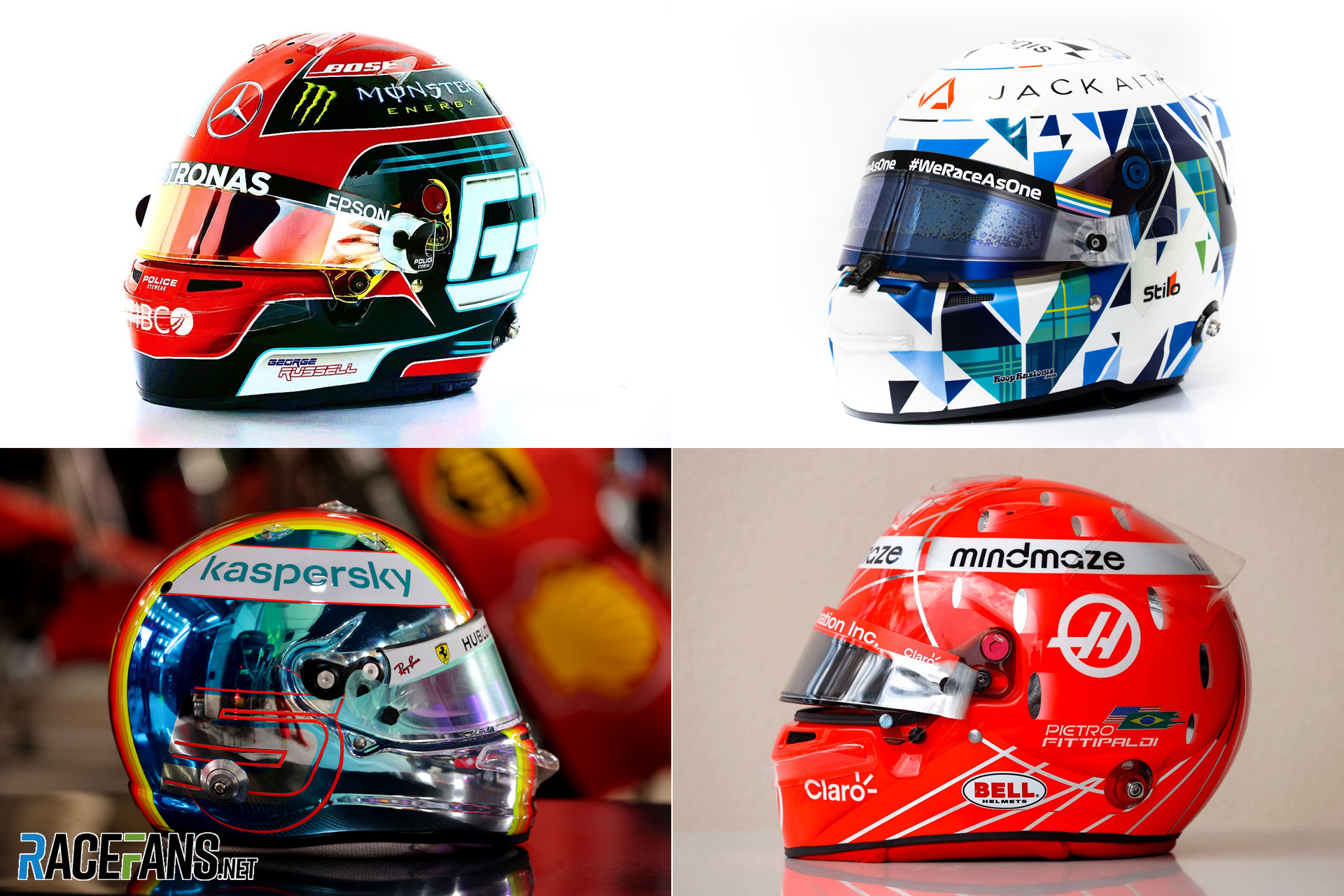 With two new drivers on the grid and another changing teams this weekend, there’s a crop of unfamiliar designs among the Formula 1 drivers.

Of course helmets aren’t merely a matter of aesthetics. As Romain Grosjean’s shocking crash showed, they perform an essential safety function which goes beyond protecting their heads from impacts.

Grosjean’s absence from this weekend while he recovered from his burns has handed a debut to Pietro Fittipaldi at Haas. Meanwhile at Williams Jack Aitken is standing in for George Russell, who has been called up to Mercedes in place of the unwell Lewis Hamilton.

Sebastian Vettel also has a new helmet this weekend and Lando Norris has brought the design he intended to use for the Turkish Grand Prix, following problems with Belgian customs, which prevented him from running it at Istanbul Park.

Russell has used the opportunity of stepping up to Mercedes to take his Michael Schumacher – referencing helmet design further, this weekend.

Russell, who was a fan of Michael Schumacher growing up, based his own helmet designs on Schumacher’s Ferrari-era red outline. This weekend he has joined Schumacher’s last Formula 1 – Hamilton replaced Schumacher in Mercedes’ line-up seven years ago – so Russell has changed the red-white-and-blue design used at Williams but kept the red outlines that reflect Michael’s design.

The darker panels, keeping some light blue highlights, are closer to the design Russell used in his GP3 championship year and particularly, a helmet he used in his first F1 test for Mercedes in 2017, as well as two practice outings for Force India that year. The dark panels more closely resemble Schumacher’s 1998 Ferrari helmet – the year Russell was born – than his later, more red helmets used at Mercedes.

Jack Aitken has kept to the geometric design he’s been using all year but changed to incorporate Williams blue and white colours and a tartan to reference his Scottish heritage.

The design is based on origami, which Aitken has described as extrapolating into the geometric “explosion, mess” of triangles. A unicorn at the back of the helmet reflects his Scottish heritage again, as the national animal of Scotland.

Fittipaldi has chosen to run a variation on his previous helmets, using an all-red design for his grand prix debut.

In the past, he’s used a similar red outline, detailed with lines, to his two-time F1 world champion grandfather Emerson Fittipaldi’s design and he retains that here. However, rather than have the side panels in a different colour – in the past, he’s used Senna-style Brazilian yellow and green, white or neon – he’s opted to make the whole helmet the same, bright red.

Silver lines highlight the detail of the normal red shape, to stand out under the floodlights with a nod to his grandfather’s helmet.

Habitual helmet-swapper Sebastian Vettel has a special reflective design for his penultimate race for Ferrari under lights in Bahrain.

Lando Norris is sporting an all-red version of his usual helmet design, with reflective panels to pick up the Bahrain spot lights.

This was supposed to be used at the Turkish Grand Prix but got caught in Belgian customs only reaching him now. He has already suffered one flag-related diplomacy incident over a helmet design this year so it’s fortunate for him that since 2002 Bahrain and Turkey have strengthened their relationship to become strong trading partners and allies.

The design seems to have been lightly modified since the Istanbul Park weekend, with black ribbons replacing some of the red panels to better match Norris’ Team Quadrant logo.