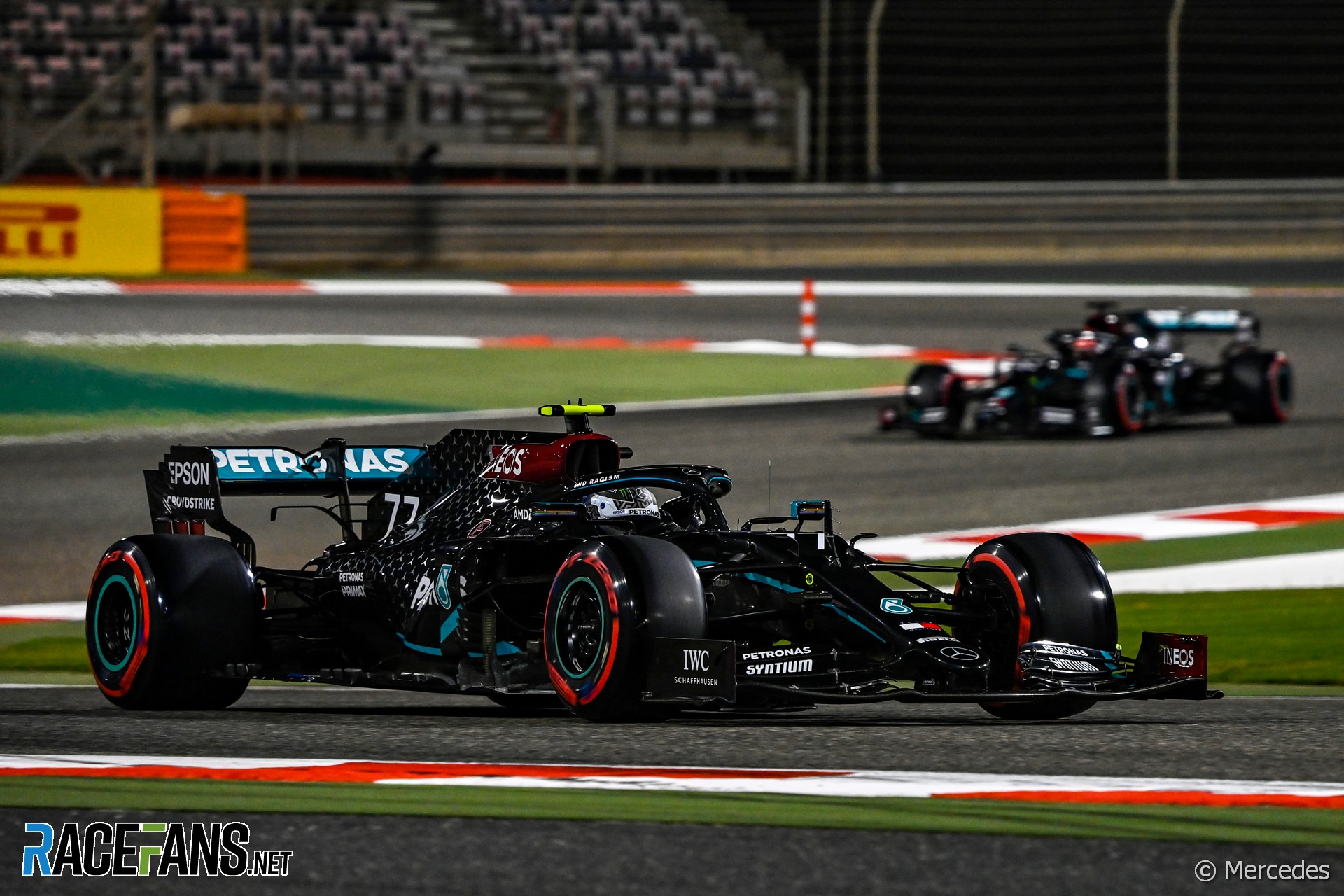 Max Verstappen will start behind them and Charles Leclerc surprised by qualifying his Ferrari in fourth place.

The first round of qualifying nearly tripped up Alexander Albon, who only made the cut to reach the second stage by eight hundredths of a seconds. Red Bull gambled against sending him out for a second run, a decision which narrowly paid off.

Lando Norris also had a tough time as he had to make an additional run after having one lap time struck for exceeding track limits at turn eight. The McLaren driver also secured his progression to Q2.

For the first time this weekend Valtteri Bottas headed a session, with two tenths of a second in hand over new team mate George Russell. The pair were split by Max Verstappen, who was well over half a second faster than his team mate in the other Red Bull.

Newcomer Pietro Fittipaldi, in his first race weekend for 10 months, unsurprisingly propped up the bottom of the times sheets, an outcome which meant his grid penalty for a power unit change made no difference. Fellow rookie Jack Aitken got his Williams ahead of Kimi Raikkonen’s Alfa Romeo, and finished within a tenth of a second of his team mate.

Both Ferrari drivers made the cut for Q2 and both opted to run the medium tyres, hoping to avoid the potential strategic disadvantage of starting the race on soft tyres. Despite Sebastian Vettel having switched to an old engine (without penalty) since final practice, both lapped within a few hundredths of each other on their first runs.

But it was about to get much closer at the top. Bottas shaded Russell by just 16 thousandths of a second on their first runs, setting up the usual Mercedes one-two. Then Sergio Perez unexpectedly beat the pair of them, leading the times. Lance Stroll was only five-hundredths of a second in the other Racing Point, but in this incredibly quick session that proved enough only for fifth, as Carlos Sainz Jnr put his McLaren third.

The Ferrari pair went for another run on softs but only Leclerc completed his time, taking sixth. That was good enough to relegated Verstappen’s medium-shod Red Bull to seventh, fractionally quicker than Albon, despite his team mate using softs.

Norris, who was only 14th after his first run, led the field out for their final runs. But as he accelerated out of turn three he unexpectedly slowed, and let Stroll pass him. His team told him to begin another lap and get a tow from Antonio Giovinazzi ahead of him, but he abandoned his lap and pitted.

That doomed him to dropping out in Q2. Giovinazzi also went no further, and Vettel dropped out with them. Albon took another run on softs but couldn’t make the cut either. Verstappen gave up on trying to progress on the mediums and switched to softs, producing a quick enough lap to lead the times. That left the Mercedes drivers as the only ones to pass through Q2 on mediums.

Esteban Ocon was the last driver to miss the cut for Q3, Pierre Gasly beating him to the last place in the top 10 by 14 thousandths of a second.

It looked like business as usual for Mercedes after their first runs in Q3. Bottas led the way with nearly two-tenths of a second in hand over his team mate. However their times were only fractionally quicker than they’d managed in Q2, having run used tyres.

Verstappen displaced them from the top of the times with a 53.591 second lap. But an ever bigger surprise came from Leclerc, who planted his Ferrari in second, a mere 22 thousandths of a second slower than the Red Bull, and ahead of both Mercedes. “This lap was very good,” he admitted on the way in.

However Mercedes had a plan to take advantage of the unusually short track to make three runs in qualifying. Bottas and Russell were swiftly back out, this time with the track to themselves, and reasserted their supremacy, Bottas producing a 53.377.

But on his third and final run, Bottas couldn’t find any more time. Russell, running behind him, chipped away, and crossed the line a mere two-hundredths of a second off his team mate. It was a credible effort for his first time in a Mercedes, but it brought to an end his perfect record of out-qualifying his F1 team mates.

Verstappen slotted in behind them – a frustrating five-hundredths of a second shy – while Leclerc’s time was good enough for fourth. Perez and Kvyat jumped up to fifth and sixth with their last runs.