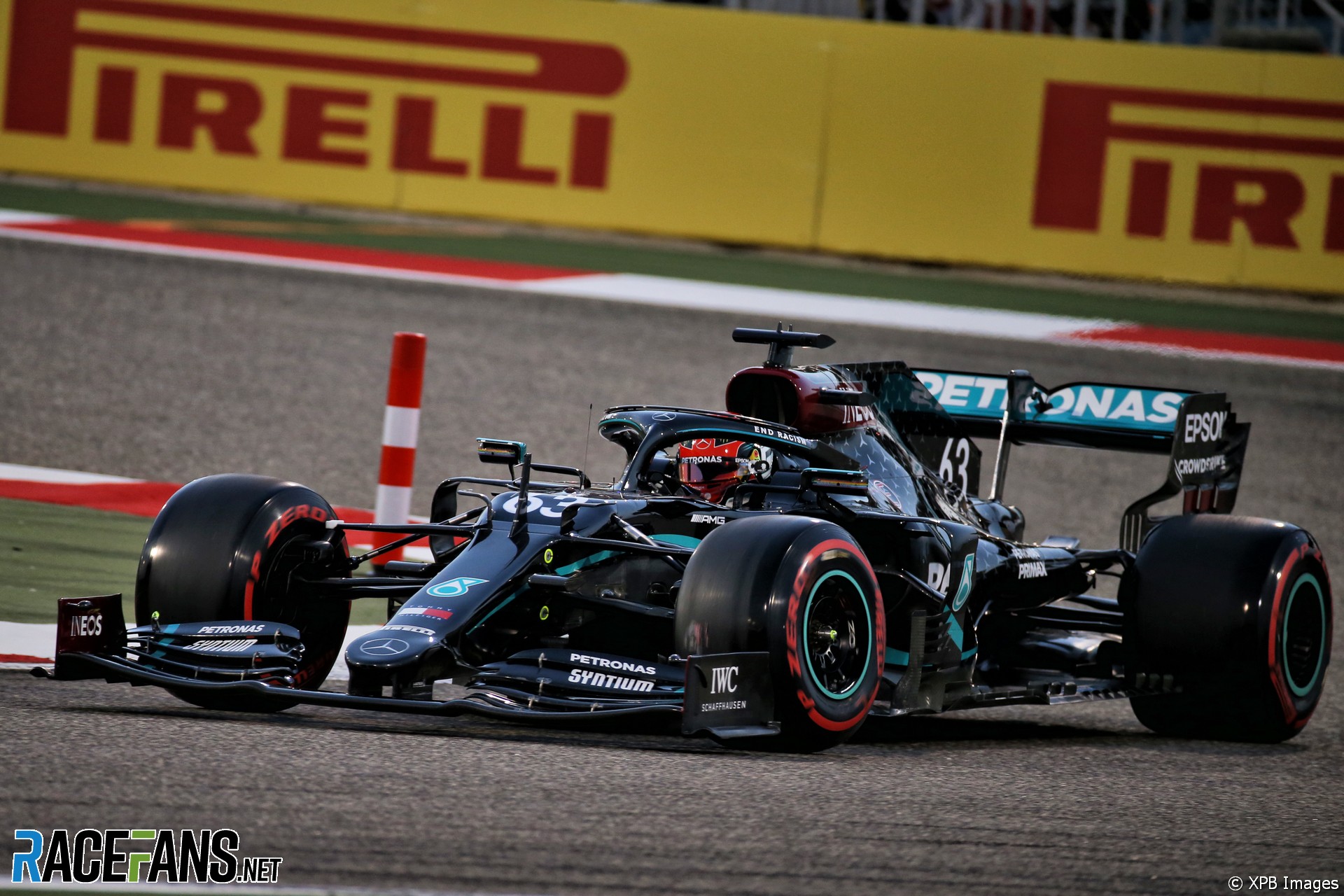 George Russell led the first practice session for the Sakhir Grand Prix on his debut for Mercedes.

He set a quickest time of 54.546 seconds around the short ‘Outer’ Bahrain circuit which is being used for the first time as it holds the penultimate round of the championship.

His Mercedes team mate Valtteri Bottas was only fourth fastest. Team principal Toto Wolff said the pair were on “like for like” programmes but revealed a damaged bib on the underside of Bottas’s car caused lock-ups, hurting his lap times.

“Valtteri broke his car pretty early on in the session on the bib,” said Wolff. “You could see that towards the long runs at the end.”

Russell began the 90 minutes of running well down the order, sitting in seventh while Bottas came out of the pits to take the top time. While Russell exchanged detailed set-up notes with his engineer, the times were comfortably topped by Bottas and the Red Bulls for the first half of the practice session.

However, once Russell got up to speed he was virtually immovable from the top spot. Verstappen briefly dislodged him, before Russell reclaimed the fastest time with the best lap of the session. All times were set on soft tyres, drivers able to make surprisingly long runs on them, still setting times after ten or more laps, thanks to the short, low-energy lap.

The AlphaTauri pair were in the mix, splitting the Red Bull and Mercedes cars at various points. Daniil Kvyat and Pierre Gasly led the midfield by over a tenth of a second, despite the very short lap time, when the chequered flag fell.

Gasly suffered a broken right wing mirror early on in the session, forcing him to hold on to it with his left hand as he drove back to the AlphaTauri pits. Charles Leclerc also went for a short excursion through the gravel around turns five and six but kept the car going and the session was otherwise pretty clean, without any substantial yellow flag periods.

Grand Prix debutant Pietro Fittipaldi, substituting for Romain Grosjean at Haas, was the first car out on track but struggled to get a clear run in. He and fellow newcomer Jack Aitken ended up last in the times. Both lost running after badly flat-spoting sets of tyres in the first hour of the session. Fittipaldi, in particular, missed most of the latter half of running and only completed 24 laps.

McLaren seemed noticeably out of order, finishing the session with Carlos Sainz Jnr 13th and Lando Norris 16th, behind both Racing Point and Renault cars in their fight for third in the constructors’ trophy. The top 10 was therefore completed by the Renault and Ferrari drivers.

Several drivers ran wide at the turn seven and eight chicane, but new track limits rules will come into force for the second practice session. “Track limits at turn eight from second practice will be the red and white kerb,” Max Verstappen’s engineer advised him shortly before the session ended.

139 comments on “Russell fastest on his Mercedes debut, Bottas fourth after damaging car”