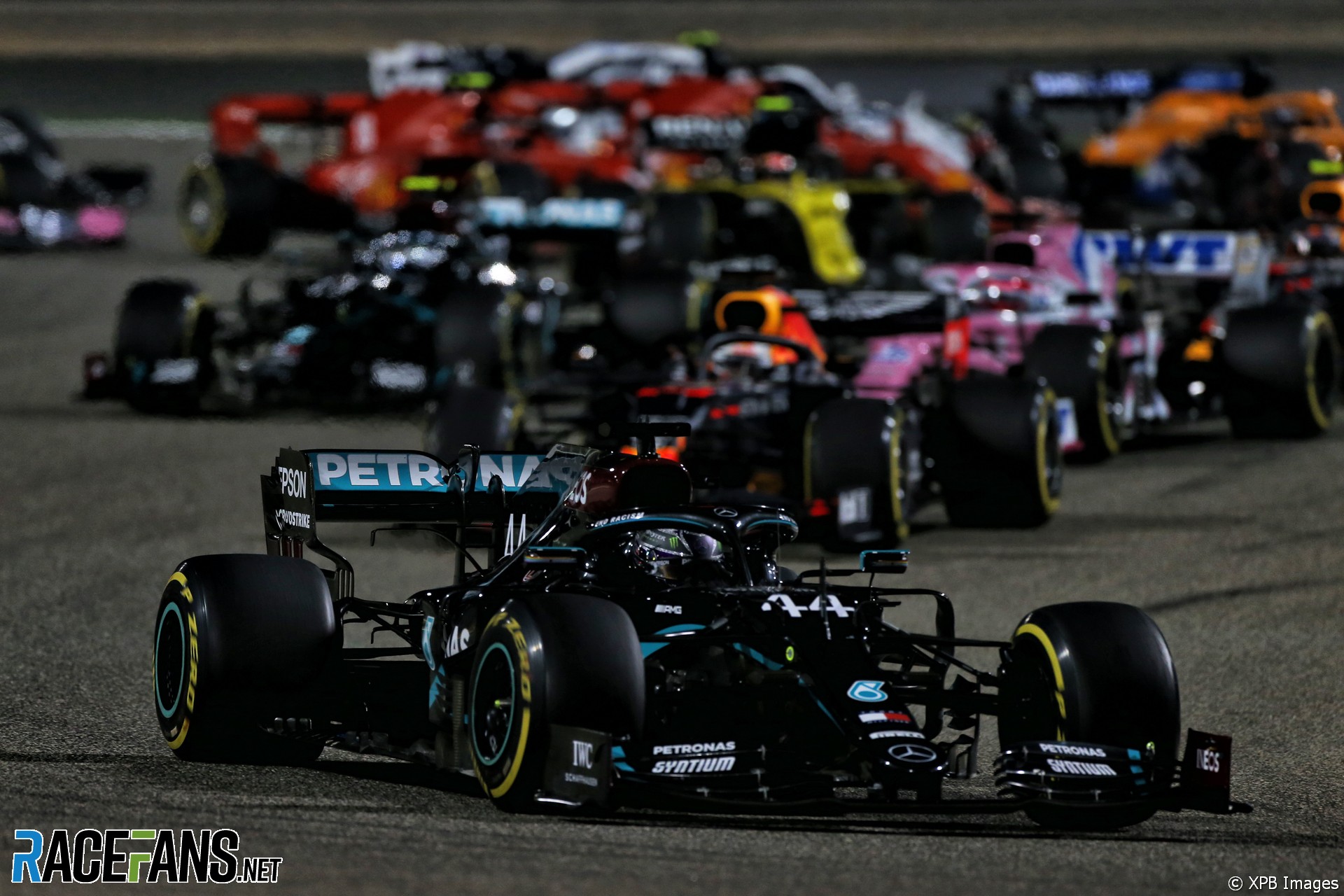 Lewis Hamilton scored his 11th victory of the year in a Bahrain Grand Prix which was disrupted by a shocking first lap crash involving Romain Grosjean.

The Haas driver was pitched into a barrier at turn three on the first lap of the race, after making contact with Daniil Kvyat’s AlphaTauri. Grosjean went nose-first into the barrier at almost unabated speed, striking it with a force of 53G.

The impact ripped the Haas in two. It erupted in flames, yet despite the huge hit Grosjean remained conscious and was able to climb out of his burning car in less than half a minute, while safety crews arrived on the scene and began dousing the flames.

The race was immediately red-flagged after the crash and did not resume for almost an hour and a half while concrete barriers were used to replace the Armco destroyed by Grosjean’s car.

Once the race resumed, Kvyat found himself involved in another dramatic incident. This time he launched Lance Stroll onto his roll hoop at turn eight. The Racing Point driver was unhurt, but the Safety Car was summoned while he was extricated. The stewards deemed Kvyat responsible for this collision, handing him a 10-second time penalty.

Hamilton’s win never looked in doubt. Valtteri Bottas lost several places at the initial start, then pitted immediately after the restart due to damage.

Max Verstappen pursued the Mercedes more closely than in recent races but second place always looked like the limit of what his Red Bull could do. He had enough of a gap to make an extra pit stop, which he took, to make an attempt on the bonus point for fastest lap.

Sergio Perez ran third all race, steadily increasing his lead over Verstappen’s team mate Alexander Albon. But with four laps to go smoke appeared from the back of his car, followed by flames, and he came to a stop at the exit of turn 10. That handed the final podium position to Albon.

Lando Norris – who was shocked to see a marshal running across the track to the scene of Perez’s retirement – moved up to fourth place ahead of team mate Carlos Sainz Jnr, securing a points windfall for McLaren on a bad day for Racing Point.

Bottas recovered as far as eighth place by the time the Safety Car came out, following Pierre Gasly in sixth and Daniel Ricciardo in seventh. Esteban Ocon and Charles Leclerc collected the final points.