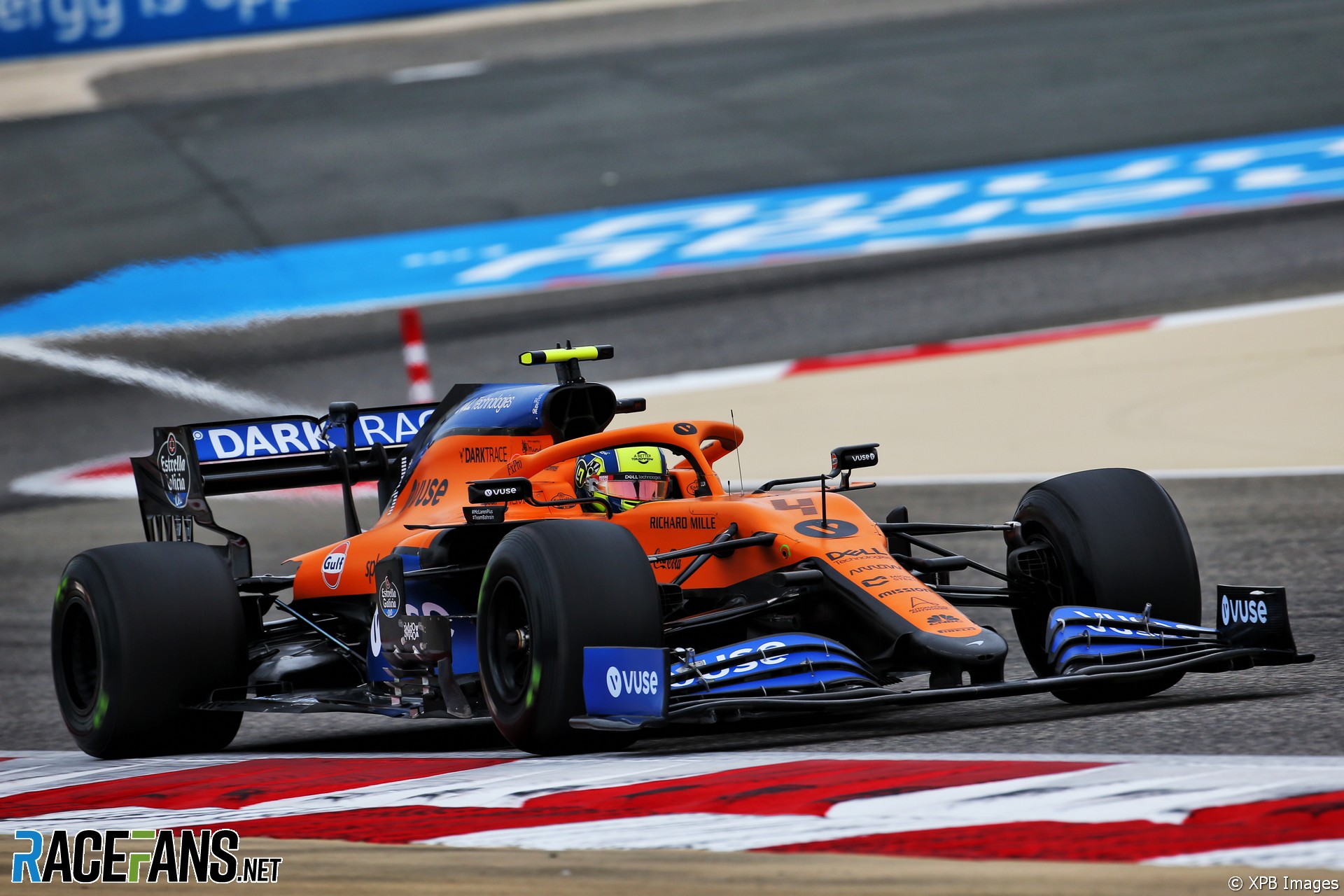 In the round-up: McLaren are five points away from third in the championship, but Lando Norris suspects their car is not among the four quickest at the moment.

McLaren are locked in the three-way battle for third place in the constructors’ championship with Racing Point, Renault and Ferrari. Just five points behind Racing Point going in to this weekend, Norris says their performance has been achieved despite having a slower car:

It’s the last few races where we can really make a big difference and get that extra position in the constructors if we can. But it’s not going to be easy at all.

I think Racing Point have probably been the quicker team throughout the whole season. I think that’s quite easy to admit. They’ve just had inconsistency with some of the drivers not being not allowed to do all the races and Nico [Hulkenberg] having to step in.

Even when we’ve had both of our drivers on full fitness for the whole season, they’re still ahead of us at the moment. So it’s tricky.

I don’t think we’re the third-best car or the fourth-best car, I think we’re a little bit behind. Where we can do a better job and where we’ve done a better job throughout the season is just the consistency and not making the mistakes of some of the other drivers and teams have made.

|@DanielRicciardo on the track invasion during second practice:

"It looked quite cute! Fortunately it didn't get too close to me…" #F1 #BahrainGP pic.twitter.com/g7v4oSBmhj

"Drugovich and Ticktum fired up to second and third but neither of them could touch Ilott, who was nearly four tenths faster. The Briton was the first car back in the pits, satisfied with his work in the first stint."

"Grosjean is being considered for a seat in one of the four-time Indy 500 winner’s Chevy-powered Dallara DW12s, as ongoing talks have taken place with the 34-year-old Frenchman to join countryman Sebastien Bourdais and Canada’s Dalton Kellett, who is tipped to return in 2021."

Practice in the desert (Alfa Romeo)

Robert Kubica: "It’s been quite a while since the last time I was in the car, as in the meantime I have been driving in DTM, so it was crucial to get the feeling for the car and the confidence straight away. It went well, I got back in the way of driving these cars quickly and I felt quite at ease. It was a good session overall, we completed the full programme so we are happy with how the day went. "

"The FIA and Formula 1 can today confirm that between Friday 20th November and Thursday 26th November, 4887 tests for COVID-19 have been performed on drivers, teams and personnel. Of these, 9 people tested positive, in addition to the previously announced positive case for Aston Martin Red Bull Racing Sporting Director Jonathan Wheatley. "

"In March 2020, Mercedes-Benz announced a sustainable business strategy for motorsport activities and ambitious steps towards carbon neutrality. We set the target of achieving a net-zero carbon footprint by the end of 2020 and cutting CO2 emissions by 50% by 2022, compared to the team’s 2018 baseline. Despite the challenges of the COVID-19 pandemic, the team is on course to achieve the projected reduction for 2020 through the transition to renewably sourced energy and gold-standard carbon offsetting."

"With a rulebook thinner than a slice of Lando Norris’ favourite pizza, it was a case of pretty much anything goes when Can-Am launched in 1966. The only real boundaries were those of your imagination and that was music to the ears of a bright, young engineer like Bruce. The series gave birth to some of the most spectacular racing machines ever seen and, in some cases, they were faster than their Formula 1 counterparts."

"FP1 was more about understanding the 2021 tyres over long runs, and also to sign off and understand some of the new aerodynamic components, so there was less setup work carried out in that session. We reviewed the data and made some changes to the car, and with the track being rear limited, along with an aggressive tyre choice, rear degradation was high, so we needed to address that going into FP2. We started FP2 with a short-run compare with the 2020 vs 2021 tyre, then went on with our normal programme."

After teams were given the opportunity to test 2021 tyres during first and second practice, BaKano notes that Mercedes’ busy Friday running shows how dedicated they are to improving and seeking an advantage:

One of the topics mentioned before this grand prix was that teams would start working on the 2021 season. That explains why Mercedes, with nothing more to gain, used two sets of the 2021 tyre and ran a lot of laps on it.

Tyres are “all the rage” in F1 in the latest times, so start building on that. One of the reasons why even though it’s boring, Mercedes [dominance] is justified, is they keep on working to continue on top, regardless of the advantage they have over the others.
BaKano

8 comments on “Norris: McLaren don’t have a top-four car”