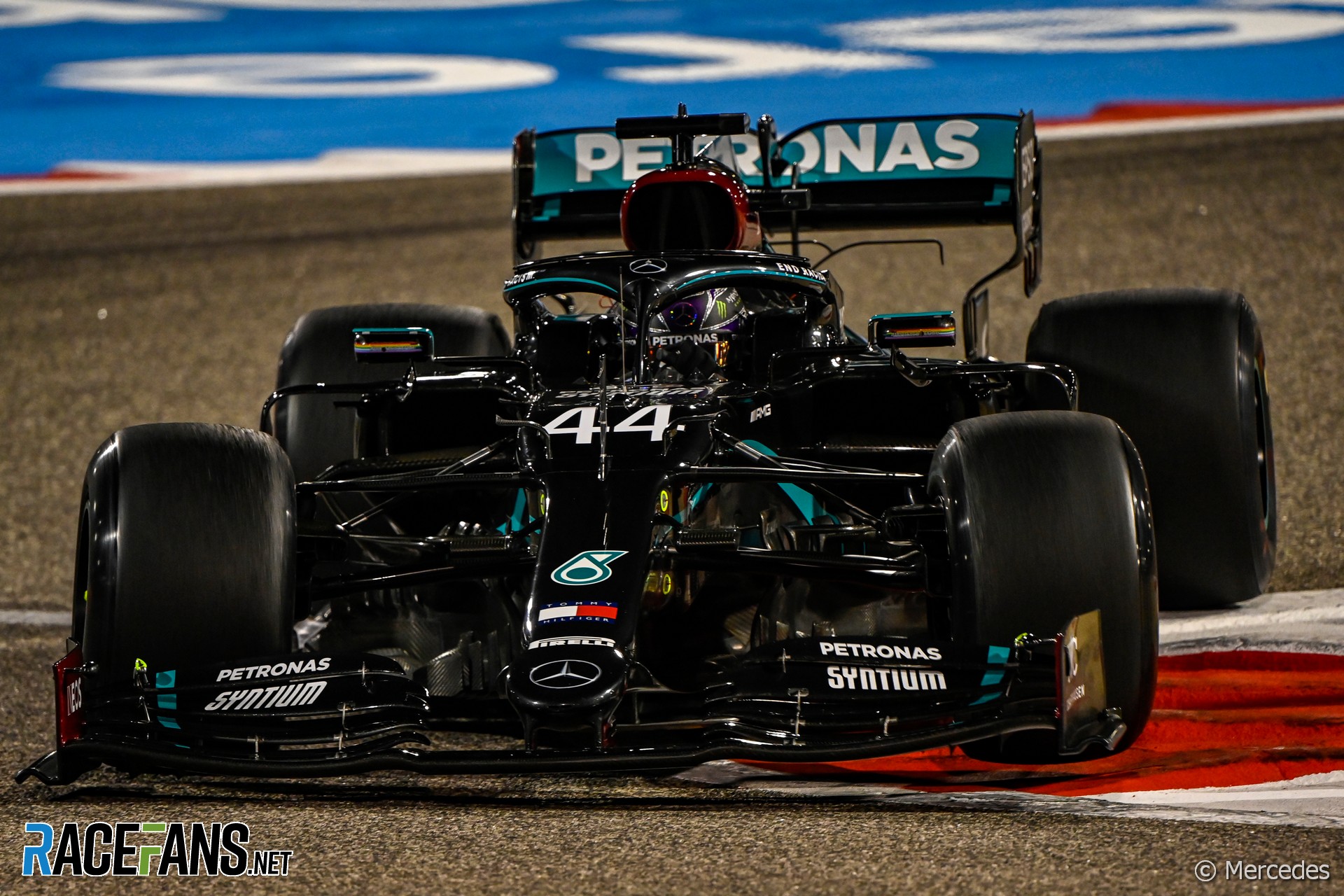 With the soft tyres only good for a single flying lap, and the track likely to give better grip as the session went on, few drivers ventured out immediately after qualifying began. This inevitably meant the track was congested as drivers started their laps, and several complained their out-laps were disrupted by traffic.

Verstappen went out early and set the initial pace, his Red Bull sparking dramatically down the straights following a late adjustment to its ride height. The Mercedes pair soon relegated him to third, Hamilton by half a second, Bottas just a tenth faster.

Charles Leclerc was among those who had his build-up lap disrupted by other cars ahead of him. “Please don’t send me into traffic like this,” he asked his team after his first lap left him 16th, just above the drop zone. Kimi Raikkonen plus the Williams and Haas drivers were behind him in the bottom five and at risk of elimination following the first runs.

George Russell led the field out for the final laps and leapt up to eighth, indicating how quickly the track was improving as more rubber went down. He was rapidly demoted by a succession of quicker cars, though Antonio Giovinazzi was unable to get back in front of him, which meant the Williams driver reached Q2 again.

All four Ferrari customer cars therefore dropped out in the first round, including Romain Grosjean, who had been unhappy with his car’s balance throughout practice. “I tried too hard mate, I wanted to enjoy it,” he said after beating his team mate to 18th. “Hopefully it’s not too bad tomorrow.”

The second stage of qualifying also began with a lull of a few minutes before a clutch of cars headed onto the track en masse, led by Daniil Kvyat.

But before anyone had been able to set a time Carlos Sainz Jnr’s McLaren spun to a stop a turn one. To his dismay, Sainz discovered he couldn’t drive away again. “Come on, no, don’t tell me this,” he said. “Yeah there’s no drive.”

Having checked with race control, McLaren attempted to restart his car, but were unable to get him going again. The session was red-flagged while the stricken MCL35 was recovered.

Once Q2 resumed, only a portion of the field rejoined the track. Verstappen initially went fastest, but Hamilton again found more than four-tenths of a second to regain the top spot. Bottas, however, was fractionally slower than the Red Bull. Albon took fourth, but was seven-tenths of a second behind Verstappen.

“Where am I losing time?” he asked. “It’s mainly middle sector”, replied his engineer, “a little bit six-seven, a little bit eight, a little bit nine.” He was only a tenth of a second quicker than Lando Norris in the sole remaining McLaren, followed by Sergio Perez.

The rest of the drivers waited until the end of the session to do their only runs. Both renaults grabbed places in the top 10. Esteban Ocon was told “do not give Leclerc a tow”, and that may have done for the Ferrari driver, as he failed to reach the final stage. Sebastian Vettel dropped out as well, meaning the team which locked out the front row of the grid last season failed to make Q3 this year.

The pole-winner from the previous race, Lance Stroll, also took no further part in the session. He remained on a used set of medium tyres and ended up 13th, telling his team there had been a “miscommunication” and they would “speak about it after”.

Verstappen split the Mercedes pair on the track and on the timing screens on their first runs in Q3. The Red Bull driver appeared between the two W11s as they began their laps, and with the quickest middle sector set a lap just 0.146 seconds behind Hamilton. Bottas was almost a tenth off the Red Bull in third place.

Despite that, Verstappen wasn’t happy with the balance of his Red Bull, reporting he had less rear grip than in final practice. Even so, he was more than a second faster than Albon. The second Red Bull was seventh after the first runs, losing out to Perez, Gasly and Ocon.

Hamilton made sure he led the field around before beginning their final runs, while Verstappen came around behind Bottas and Norris. The world champion lit up all three sectors, posting a record-breaking time of 1’27.264.

Bottas got much closer – just over two-tenths of a second behind – but Verstappen couldn’t beat him this time. While one Red Bull slipped to third, the other moved up to fourth – but only just. Sergio Perez, the driver who has been widely rumoured to take his seat, was just four-hundredths of a second slower in fifth.

Daniel Ricciardo improved with his last run to lead the Renault pair in sixth and seventh. Lando Norris split the two AlphaTauris, Pierre Gasly ahead of Daniil Kvyat.