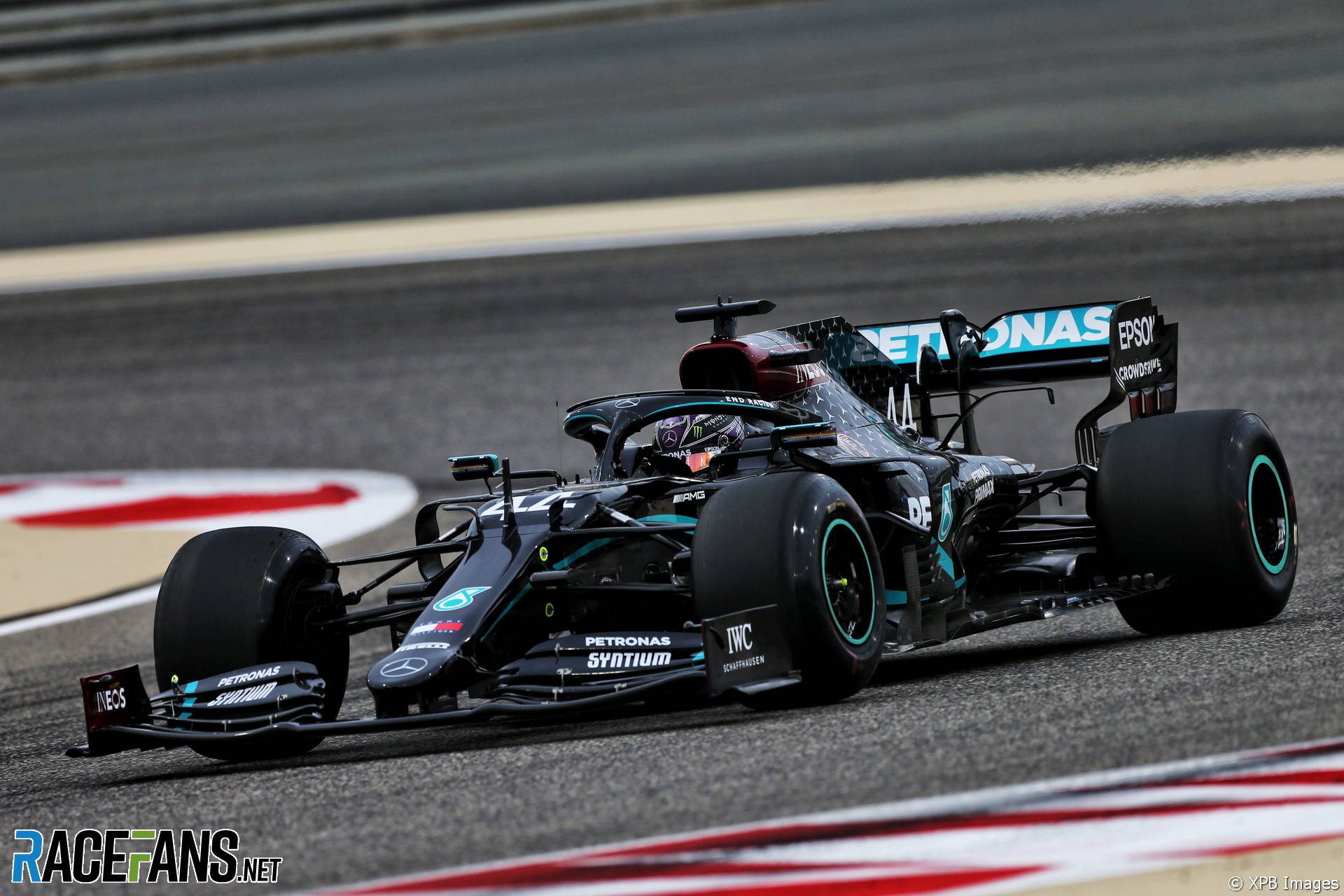 Lewis Hamilton has renewed his criticism of Pirelli’s tyres after sampling their latest compounds for the 2021 F1 season in practice for the Bahrain Grand Prix.

All drivers were required to run versions of Pirelli’s 2021 compounds during today’s practice sessions. Hamilton was one of several who were unimpressed by the new rubber.

However after driving the tyres today, Hamilton was unimpressed. “We’ve got a team here from Pirelli and I have the utmost respect for the guys that load our tyres up, come here and keep us safe and they do an amazing job,” said Hamilton. “Unfortunately, we’ve had the same tyre for the last two years.

“At the end of 2019 they brought a new tyre, which they normally do, and it was quite a bit worse. So then they said ‘well, we’ll just keep the tyre from last year’.”

Despite having further time to develop their tyres, Hamilton said the new rubber is a step backwards.

“They’ve had two years now to develop a better tyre and we’ve arrived with a tyre that’s three kilos heavier and is like a second worse per lap.

“I know for the fans that doesn’t really make a difference but from a driving point of view we’re working with brands and partners who are at the forefront of technology and elevating and moving forwards. And if you’re going back, after two years of development, then I don’t know what’s happening.

“It definitely doesn’t feel good out there and it’s a worry. I’d prefer to just stay on these tyres. If that’s all they’ve got and that’s the best they can do, which clearly it is, then it’d be better just to stay with this tyre.”

Last year Hamilton attended an FIA meeting as a representative of the Grand Prix Drivers Association to put forward their concerns over tyre development. Last year drivers gave their input to F1’s ‘target letter’ for Pirelli, which sets down goals for tyre development.

“The previous target letter we weren’t involved in and they hadn’t listened to a single word we’ve said in previous years,” said Hamilton. “We delivered lots of emails going back and forth to help them. And it’s still no better.

“So I wouldn’t say that we can do any more. Ultimately it’s technology. I don’t know if we’re at the limit of technology or it’s just their limit.”

Formula 1 is due to switch to new, 18-inch wheels in 2022. Hamilton is fears this could prove another step backwards.

“When we go to the bigger rim, I’ve heard we lose grip when we go to that tyre. I think what we actually really need in Formula 1 is slightly less downforce and more mechanical grip and a lot of that comes from the tyres so that we can follow closer.

“But it doesn’t seem that we’re going in that direction. Naturally I think we don’t want to go backwards, so I think there’s more work to do.”

Other drivers also gave unfavourable feedback on the new tyres. Alexander Albon said they were “not very fun to drive on” and his team mate Max Verstappen similarly unenthused.

“It’s difficult to know what components we were running,” said Verstappen after his experience of the 2021 rubber. “We were a bit all over the place to be honest in terms of grip and balance. So we’ll look into that and we’ll speak to Pirelli about it.”

Kevin Magnussen’s verdict on the tyres was they were “not very good.”

“They’re certainly not quicker,” said the Haas driver. “I don’t know if that’s the final tyre for next year but [they] could be better.”

Sebastian Vettel concurred with Hamilton’s view that F1 should keep its current tyres instead of switching to the new ones.

“They were not a step forward, the opposite pretty much,” he said. “[They were] probably worth a shot but I hope we don’t see these tyres again, they are quite a lot worse compared to the tyres we currently run.”

“If that [tyre] is the only option for ’21 then absolutely I would love to stick with the ’19 tyres,” he added. “I think as long as we don’t have an option that gives us anything that the current tyre doesn’t give – less overheating, better chance to fight each other – then we shouldn’t get onto a different tyre.

“This one is worse, for sure, and it will make all the problems that we struggle with already even worse.”