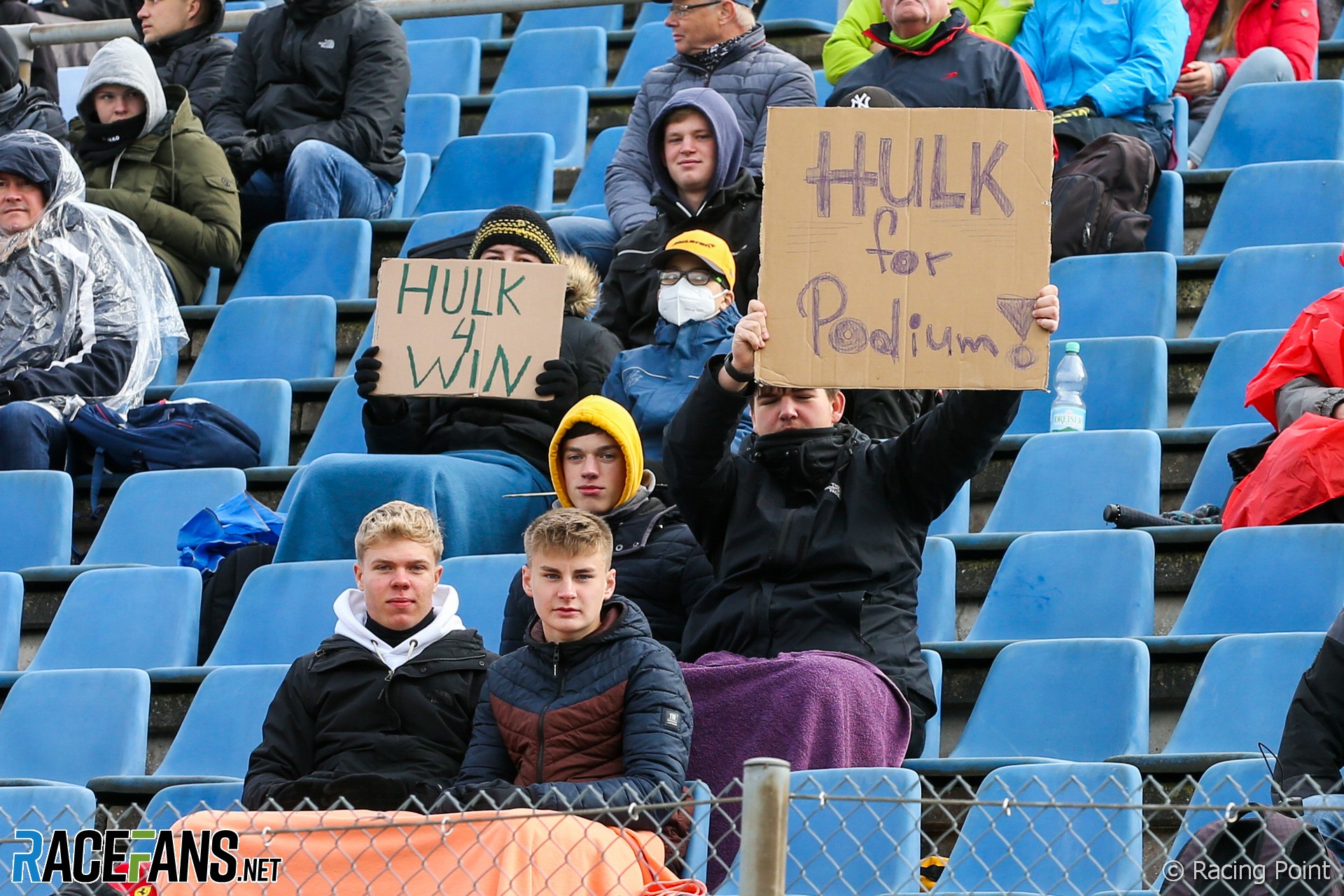 In the round-up: Nico Hulkenberg admitted his performances at Silverstone didn’t make an immediate difference to his chances of returning to Formula 1 full-time next year.

Since we launched our RaceFans Supporter Drive three days ago we’ve had an encouraging response from readers who want to help us continue producing quality, original, independent motorsport coverage.

We’re aiming to recruit 3,000 new RaceFans Supporters – head over here to find out why and to join up:

Hulkenberg made his second return to F1 this year with Racing Point last weekend having driven for them in two rounds at Silverstone, though he was unable to start the first due to a technical problem:

Obviously it was difficult to expect very much from this race with so little preparation. The other guys they’re in the season, they’re in their car, and then here I am being thrown into the ice bath and trying to swim and survive somehow. So I feel quite happy and relieved that I managed this kind of performance.

Halfway through the first stint, things were falling into place. I was getting into the groove and into a good rhythm with the car. And I think that was key for us to then pull off the rest of the strategy and stay out of trouble. We obviously had a bit of help along the way from from some people dropping out, but still nonetheless good good strategy and a solid drive.

It’s difficult to say [what this means for 2021]. Obviously, this is the best I can do or the maximum I can do to promote myself and advertise. But after Silverstone also nothing really changed dramatically immediately. I think it’s still a process and people know that I’m around, but we’ll just have to be a bit more patient to see what’s happening.

Fun day today in the 3 seater. Managed to bring the little bro for a ride too 🏎 @missionwinnow 📸: @calloalbanese

"It was tinged with a bit of sadness because we spent many, many years watching Michael win numerous races and titles and here we are, emulating the great Michael Schumacher. And to have his son present Lewis with that helmet was just a very humbling experience."

"We believe that Oliver has a great deal of talent and potential for the future. He has had an incredibly difficult rookie year, with a lack of overall track time and recent medical issues."

"We’ve taken on a lot, adding Indy Lights, but IndyCar is still the goal. We can definitely see us treading lightly into the IndyCar pool, beginning with the month of May – the Indianapolis Grand Prix and the Indy 500."

Hamilton: 'I'm Not Going to Stay Quiet' (Road and Track)

"There’s been times where I’ve tried to say something, and it backfires. Maybe it’s not said the right way, or people aren’t happy that you said something. And I was like, “That’s not going to happen anymore.” I just can’t do that. And I’m not going to stay quiet."

"They are designed to work at their best at a temperature just over 100°C, given the high level of aero downforce generated by the cars. Usually the track temp is somewhere between 30 and 40 degrees centigrade although the Pirellis can work fine up to 60°C, which we can see sometimes in Bahrain. It is pretty unusual to see the 15°C we had in Germany."

"Amid rampant speculation that McLaughlin will move to IndyCars as Roger Penske pulls out, Johnson also pledged the team he founded would continue."

"The 25-year-old is best known for her extensive karting experience, having won numerous titles throughout her career, with a highlight being the 2008 Honda Cadet British Open Championship."

"The girls also got their first taste of the karts and, after a period of track familiarisation, were encouraged to set ‘hot laps’ around the 964m circuit, benefitting from the feedback of the Winfield Racing School coaches who talked them through their racing lines, acceleration and braking points. They also had the chance to evaluate Pirelli tyre performance ahead of tomorrow’s qualifying simulation."

Hamilton’s cleaner approach to racing than several other multiple champions is part of what makes him great, says @Roadrunner:

Congrats to Lewis Hamilton. What a career. We’ll never know who the all time best is but you can’t deny the numbers.

Furthermore – what we do know – is that Hamilton in comparison to Schumacher, Senna and Prost never used any dirty tactics. He played hard but always fair. For me that is the absolute standout of his legacy and should inspire the coming generation not only of drivers but basically of any sportsmen.
@Roadrunner