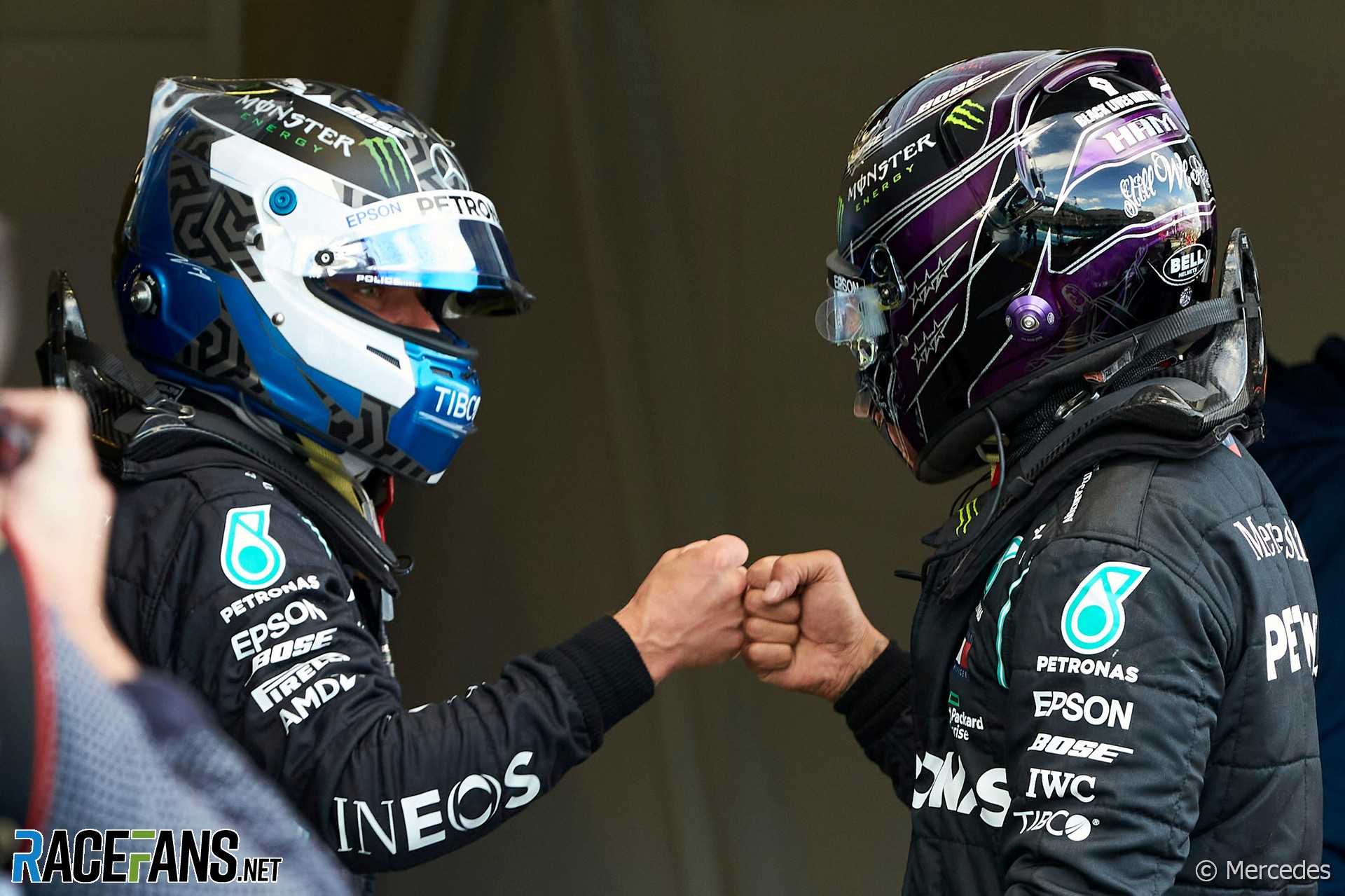 Valtteri Bottas has chipped into Lewis Hamilton’s championship lead in two of the last three races. By taking pole position at the Nurburgring, he’s bought himself an opportunity to make it three out of four.

Admittedly on both prior occasions events turned in his favour: Hamilton collected penalties for entering a closed pit lane at Monza and a practice start violation in Sochi. If Bottas is going to prove himself capable of beating Hamilton in a championship fight, he needs to make this opportunity count, and leave the Nurburgring having further reduced hthe is 44-point gap between them.

Getting away from the line cleanly will be job one – an area where Bottas hasn’t excelled this year. The very sharp first corner at the Nurburgring is always a tricky braking zone and will be even more so given the very low temperatures expected on Sunday.

The Mercedes drivers, along with all the others who will start inside the top 10, have chosen soft tyres to start the race on. After qualifying Lewis Hamilton indicated he preferred to start on the medium rubber but again those low track temperatures would make than an unwise move, as team principal Toto Wolff explained.

“In the debrief that was discussed and it’s clear that the soft is the right tyre to start with and Lewis agreed to that,” said Wolff. “The reasons being that starting on the medium, you’re losing about three to four metres against the soft and all his competitors are on the softs. So it makes no sense to take big risks and a big gamble.”

Wolff doubted anyone could have qualified on the mediums, though Hamilton’s first run in Q2 seemed to indicate it was a possibility. He believes Hamilton’s preference for the tyre simply comes down to his desire to have an alternative strategy to challenge Bottas with.

“Lewis doesn’t like to be in P2 or worse. That’s why an alternative strategy always makes a lot of sense because just accepting to follow a car is not how he operates. But the soft was the right choice for the race.”

Hamilton’s concern will be that if he spends the first stint tucked up behind Bottas, both on soft tyres, with Max Verstappen potentially within range, he won’t have a strategy option to attack his team mate and could even fall prey to the Red Bull driver through the pit stops.

A key factor in the race will be the performance advantage of fresh, heated tyres. Any restarts – virtual, Safety Car or standing – are going to be tricky. When the standing restart procedure was attempted in the low temperatures of pre-season testing, some drivers suggested there could even be an advantage in pitting before the restart and putting warm tyres on in conditions such as these.

For those hoping for a lively race, there are an encouraging number of unknowns. The cancellation of yesterday’s practice sessions means the long-run performance of the tyres in low temperatueres is a mystery to many of the teams. It’s also an unfamiliar track with unforgiving run-off areas in several places – spins or crashes could easily disrupt the race.

Then there’s the ever-present question mark of races at the Nurburgring: What will the weather do? The current forecast indicates it should be dry, but very cold. There is a slight risk of rain towards the end of the race – whether this materialises, or only arrives in time to dampen the podium proceedings, remains to be seen.

Will Bottas or Verstappen keep Hamilton from a record-equalling 91st win? What can Charles Leclerc do in his surprisingly rapid Ferrari?

And where will Nico Hulkenberg finish from last on the grid, having only driven his car for 20 minutes? Share your views on the Eifel Grand Prix in the comments.

19 comments on “Will Bottas seize his chance to cut Hamilton’s points lead again?”